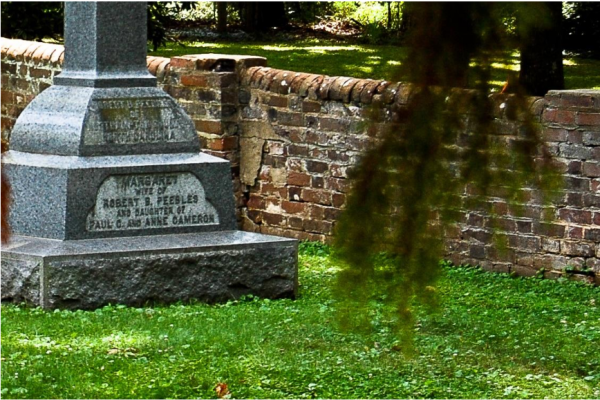 On the evening of Sunday, February 10, as the sun begins to drop low in the sky and the atmosphere grows pensive, the people of St. Matthew’s, Hillsborough, will gather for a service of remembrance. The individuals they will mourn and honor have been dead for a long time, some more than a century. They are people of color who were in some way connected with St. Matthew’s dating back to the church’s construction in 1825. The majority of them were enslaved, exploited or otherwise harmed by white members of the congregation. Many were involved in the building of the church or acted as powerful advocates for themselves, their families and others. Most of their names and stories have become known only recently through a project of St. Matthew’s Parish History and Archives Committee.

The research into their lives began as part of an adult formation offering during Lent 2018. Several months before, the Rev. Lisa Frost-Phillips and the Christian Formation Committee decided to focus the parish’s Lenten discipline on Becoming Beloved Community, The Episcopal Church’s call to work toward a world “where all people may experience dignity and abundant life and see themselves and others as beloved children of God.” Their efforts also followed the diocesan priority, emphasized again during this year's Annual Convention, of engaging in deeper dialogue with particular attention to race, among other areas of tension. Their observance featured three components: a seasonal Becoming Beloved Community curriculum, Sunday evening storytelling sessions exploring modern expressions of racism, and a liturgy of remembrance. In the liturgy, Frost-Phillips wanted to highlight people of color associated with the church during the 19th century and early 20th century, some of whose stories were familiar to her through the work of former St. Matthew’s rector and longtime diocesan historiographer the Rev. Dr. Brooks Graebner.

“I didn’t think Becoming Beloved Community was really quite enough to change hearts and minds without knowing the stories,” she explained.

With some trepidation, Frost-Phillips approached the Christian Formation Committee with the idea of telling in the context of liturgy the often difficult stories of people of color associated with the church. She wanted their stories to stand alone and for the congregation to give thanks for their witness. The committee agreed and, in partnership with Graebner, Frost-Phillips decided on an interpretive framework to honor the stories. While Frost-Phillips wrote the liturgy, Elaine Druesedow, chair of the Parish History and Archives Committee, guided committee members to research and write six stories: Cornelia and Robert Fitzgerald, the brick masons who constructed the church, Kitty, Lydia, Mary Walker and Henry Evans. (Excerpts of their stories appear at the end of this article.)

In addition to leveraging the honed skills of St. Matthew’s active Parish History and Archives Committee, Frost-Phillips also wanted to honor the parish’s long engagement with the arts. She solicited artists and the parish youth to submit works of art in response to St. Matthew’s history. Mary Rocap, parish administrator and leader of the parish’s Faith and the Arts series, contributed music to the service.

Rocap’s original composition, “He was planter; He was kind,” is a response to the words inscribed on one of the gravestones in St. Matthew’s cemetery. Acknowledging that his family and friends undoubtedly found the man buried there kind, Rocap still wondered about his legacy: Did the enslaved people he bought and sold feel he was a kind person?

“This is part of our history,” Rocap said. “We have to acknowledge it, but we also have to question what our legacy is. We have a legacy of slaveowners here in our sacred ground.”

The liturgy was originally presented as a Palm Sunday pilgrimage titled “Lifting Up the Untold Stories of Our Past.” The service was successful, so the church decided to hold it again during February 2019 in honor of Black History Month. This year’s service will take place on Sunday, February 10, at 5 p.m.

“This is the very early stages of owning our past. There have been piecemeal talks about these people to particular members of the parish who are interested, but I would say we’re still in the early stages of a conversation that will be going on for the rest of our history,” Frost-Phillips said.

Words from Rocap’s song “He was a planter; He was kind” express the responsibility St. Matthew’s is taking for its past.

Cornelia and Robert Fitzgerald, maternal grandparents to Pauli Murray, have ties to Hillsborough and St. Matthew’s. Robert came south from Pennsylvania to teach and establish schools for enslaved people recently emancipated. Cornelia was a lifelong and faithful member of the Episcopal Church, baptized and listed as “colored” at the Chapel of the Cross and later sponsoring three of her children, also listed as “colored,” for baptism at St. Matthew's.

The foundational bricks of St. Matthew’s were likely made by enslaved servants of John Berry, master brick mason and self-taught builder and architect who oversaw the construction of the “core” of St. Matthew’s as it currently stands. (The tower and chancel extension were added later.) These enslaved laborers were taught the art of brick masonry and granted freedom when they reached master status.

Kitty’s was an enslaved woman who desired to be married, but complications arose because her beloved was enslaved by a different families.

Lydia was an enslaved woman in Chowan County. Her last name is lost to us, as is almost everything about her. She emerges briefly, and bravely, as the object of violence inflicted by a man who had hired her for a term. One day in March 1829, John Mann beat her for misbehaving. She broke away, and, to arrest her flight, he shot her. Her owner compelled the state to charge Mann with assault and battery. A Chowan County jury found him guilty. On appeal, Judge Thomas Ruffin upheld Mann’s right to resort to the use of a deadly weapon. “The power of the master must be absolute, to render the submission of the slave perfect,” he wrote in State v. Mann (1829).

Mary Walker was an enslaved domestic servant in the Duncan Cameron household and mother of four children. She fled for refuge in the North in 1848 and spent the next 17 years trying to reunite her family.

Henry Evans, a free black carpenter and member of St. Matthew’s from 1840 to 1854, was recorded in our Parish Register as the “Maker of chancel furniture.” After his departure from Hillsborough, he and his brother became known for abolitionist activity in Oberlin, Ohio.