Disciple: Walking the Way of Love Along the Rio Grande

By the Rt. Rev. Anne Hodges-Copple

In May 2019, I put on my traveling shoes and headed to the Texas/Mexico border. The Rt. Rev. David Reed and the Global Missions Commission invited Episcopalians from around the country to walk with Jesus and people of the Diocese of West Texas for a visit with various communities along the Rio Grande. The hope was for us to “walk in love as Christ loves us” and to try to gain a deeper understanding of the impact of waves of refugees crossing the border to seek asylum in the United States.

Why did I go on this particular pilgrimage? I went to see for myself what is going on. I went because by the accident of birth I was born just a hundred miles or so north of this same border, while some other child of God was born just to the south of it.

As a follower of Jesus, I don’t have to ask “who is my neighbor,” because I’ve been taught by Jesus in the parable of the Good Samaritan that my neighbor is anyone in need, especially one I’ve been conditioned to fear. I am compelled by my baptismal covenant “to seek the dignity of every human being.” I have a deep-seated fear of being a priest or Levite or bishop who passes by the ones who suffer. I know I have done so at times. So maybe this was also a journey of repentance.

I went because I believe what is happening along the border impacts us all. I know it is impacting our own North Carolina communities. What is happening at our border is defining for who we are as U.S. citizens and for those of us who claim to belong to the body of Christ. As Christians, we are first and foremost citizens of the kingdom of heaven, where we seek God’s will be done on earth as well as in heaven. If one part of the body suffers, we all suffer.

Our journey started at St. Mark’s Episcopal Church in downtown San Antonio, where members don’t have to go far to see the human impact of the refugees from Central America fleeing violence. Parishioners and their partners simply go around the corner to the bus station as part of a volunteer welcome committee, greeting people just released from detention centers along the border at places like Eagle Pass and McAllen, Texas. These are families and individuals who provided evidence they face a credible threat of violence if they return to their nation of origin. They are bused from the border by private carriers hired by the Border Patrol to San Antonio or other cities and released at the bus station.

The legally vetted asylum seekers are often still disoriented from their time in detention. Our group of pilgrims found the bus station jammed with asylum seekers of all ages and condition, on their ways to places like New York City, Los Angeles, Houston, Charlotte and Raleigh.

From the bus station, we walked a city block to a respite shelter opened by the city and a coalition of faith organizations for the weary, hungry and still-fearful travelers. The volunteers at the resettlement center help individuals and families with their next steps in making arrangements to connect with family in other parts of the country.

From there we traveled to Travis Park Church, where one of the local pastors, a Duke Divinity School graduate, walked us through the overnight shelter program set up by his congregation and other partners like St. Mark’s. Here they offered their temporary guests showers, food, hospitality and a place to spend a night or two while awaiting the completion of travel arrangements.

We drove next to Star County, a stretch of the Texas border famous for drug smugglers and human traffickers. There we met with a rancher who is married to a priest of the diocese and owns an enormous expanse of property along the Rio Grande that has been in his family for four generations. While the family has long been familiar with single men going back and forth across the river to eke out a living and send wages back to their families, the rancher described the more recent phenomena of families, women with babies and unaccompanied minors crossing over. He also noted an increase in the more dangerous smugglers and human traffickers.

The nefarious smugglers work to escape detection by Border Patrol. They leave their drugs as well as human chattel in “stash houses” on the Texas side of the border so the next link in the cartel can pick up “products” and send them on.

Along the same desolate expanse of the enormous ranch, individuals and families seeking asylum are escorted by coyotes, or paid guides, who “dump” their clients on the Texas side of the river with false instructions that Houston is only a few miles away. In point of fact, Houston is hundreds of miles away, and travelers will find no water or shelter along the way. Should these migrants be intercepted by Border Patrol and charged with illegal entry, the law still allows them to appeal for asylum.

The next day we continued along the border to McAllen where we met with the rector of Saint Peter’s and Saint Paul’s Episcopal Church. The churches prepare a hot breakfast for 600 detainees at the local border detention center twice a week. The parish also prepares and serves breakfast once a quarter to the Border Patrol, acknowledging that everyone is caught up in a collision of circumstances beyond local control.

While there, we were given the particular blessing of listening to the family of a border patrol agent explain how their lives have been impacted by the overtaxing of the Border Patrol and their resources. Agents are working double shifts, alternating between arresting criminals and detaining asylum seekers, and always needing to determine the difference in the middle of the night in the middle of nowhere.

Later that day we headed to Brownsville, where a loving group of volunteers explained how they created Team Brownsville as a response to the migrants on both sides of the border who were caught in the middle of forces beyond their control. Team Brownsville delivers two meals a day, breakfast and dinner, every day to people waiting in makeshift encampments along the Mexican bank of the Rio Grande River.

These hopeful travelers wait for weeks for a chance to plead their case for asylum. If the U.S. officials determine there is a credible threat of endangerment and violence if they return to their nation of origin, they are given the documents necessary to enter the U.S. and continue the asylum-seeking process. From there, families move across the international bridge to a respite shelter in Brownsville run by the faith community. As we saw in San Antonio, it is then more waiting while further transportation arrangements are made and paid for by their U.S. family. 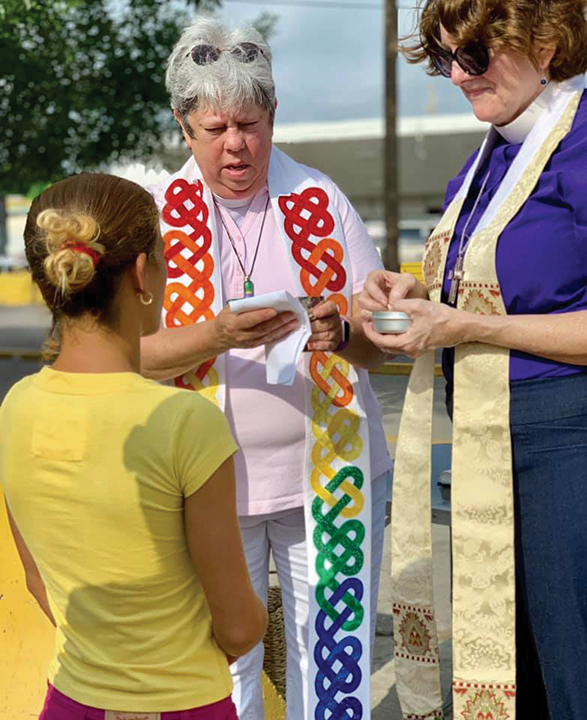 On our last day, it was time for our band of pilgrims to join the procession through customs and across the international bridge. I’ll admit I felt nervous and also kind of silly. I was pulling a red wagon filled with tortillas and huevos y frijoles. Others pulled wagons loaded with bottles of water. With a minimum of scrutiny by the border patrol on either side, we built our breakfast buffet in a parking lot by an overflowing dumpster.

We set up a dented aluminum folding table that looked like it was bought with S&H green stamps back in the 1960s. We expanded our serving line to include some concrete barriers in a parking lot. Folks living in nearby tents stepped up to help set out the food. Families lined up quietly and respectfully while newbies like me awkwardly found my place in preparations.

As we visited with those encamped, the rector of Brownsville Episcopal Church of the Advent asked some of the Spanish speakers if they would like to join us English speakers in a celebration of the Eucharist. This had not been done before, and we were unsure of the response. Faces lit up with delight. “Si, si, por favor!” Prayer books were distributed. The breakfast table was prepared once more, this time as an altar. Instead of a backdrop of stained glass, it was the dumpster, a parking lot and clotheslines about the river banks. Some worshipers were toothless, others were shoeless. Some were from Star County, and some from Durham County. Some were born in Texas, some born in Honduras and Cuba and beyond. All were strangers who had become friends. All found the Lord Jesus known to us in the breaking of the bread.

The Bible doesn’t spell out specific public policies. The Bible does, however, give us clearly stated priorities: to visit the sick and the friendless and to minister to the least of these—the brothers and sisters of Jesus.

The Bible doesn’t tell how us how to address the deep divisions in our country, but it does give us examples, in story after story, of it being done in the past. The Mission of God is to tear down that which divides and lift up what unites. If the first-century Christians could address the deep divisions between Jews and Gentiles, so can we address our destructive divisions and live a more perfect way of love.

The Bible does not give us a detailed work plan, but Jesus gave us a mission statement: to love one another as we are loved by God. The Bible doesn’t spell out the logistics, but does provide some best practices. Just put “Way of Love/Episcopal Church” in your search engine, and it will give you everything you need to know to get started and keep on keeping on.

The Way of Love is Jesus’ way of meeting people where they are: beside an empty tomb, behind locked doors in a room filled with fear, on a lonely road to Emmaus, in a cove on the shores of the Sea of Galilee, or at the foot of a bridge where concrete highway dividers become the gate of an altar rail, where strangers become friends.

I know the humanitarian crisis along both sides of the border seems impossibly complicated, and it seems to grow worse every day. But I also know that by the grace of God, all things are possible. I know that God can set a table in the wilderness and, if we pay attention, breaking bread among strangers doesn’t have to be that complicated. I know I don’t have to understand how miracles happen, I just know they happen. Jesus is ahead of us, beside us and standing in the midst of any community that breaks bread together in his name. I know that no matter how discouraged I feel by the breaking news of the day, I am all the more persuaded that God is at work in the world doing more good than we ask or imagine or possibly deserve. The question is, will we go and do likewise?

The Rt. Rev. Anne Hodges-Copple is the bishop suffragan of the Diocese of North Carolina.