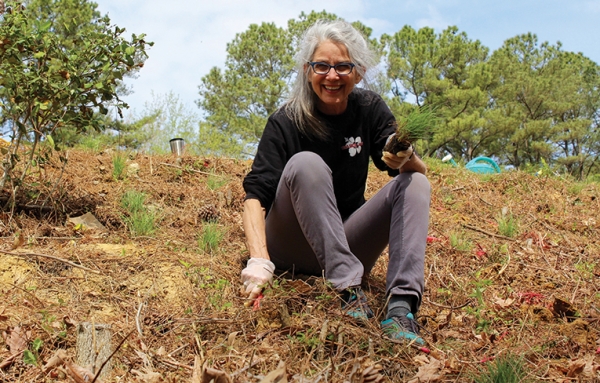 For the first 10 years of its existence, the Church of the Advocate, Chapel Hill, did not have a permanent home. Members of the Advocate embraced the gifts and unique perspective worshiping in a nomadic existence can bring, and after almost a decade of this approach decided they were ready and it was time to find a place of their own.

In January 2011, Advocate purchased 15 acres of land in Chapel Hill and from the very first set out to create a community haven of hospitality, worship and contemplation. It did not wish to exist as a standalone, single-thread entity; rather, it sought to develop and weave relationships to become a part of the fabric of the community.

The congregation of the Advocate has lived by that goal from the very start. Their church building is itself a historic church from Germanton, North Carolina, moved to the Advocate’s site in 2012 and lovingly restored for its second life in Chapel Hill. In 2015, Advocate became involved with the Pee Wee Homes Collaborative after being approached by a small group of community members hoping to bring together a group of partners to build “tiny homes” as part of the solution to the increasing lack of affordable housing. Now a collaborative including the Advocate, nonprofits, builders and individuals with skills to share, the first of the homes are so close to completion the group is in the process of accepting applications from potential residents.

The Advocate’s latest step in its ongoing community journey is the Piedmont Patch Project, an initiative to reintegrate native flora and fauna in a space where urbanization had displaced it. Supported by a late-2017 Stewardship of Creation grant from The Episcopal Church, five acres of the Advocate’s “homestead” is dedicated to the project, with a goal to “transform our site into a food-producing and natural habitat, create a network of involved neighbors and provide numerous opportunities to educate and engage people of all ages and backgrounds.” It was never intended to be done alone and from the start has collaborated with local civic organizations, university science communities, skilled volunteers and the Johnson Service Corps. The door is always open for those who wish to become a part of it.

“The idea for the Piedmont Patch Project developed about the same time as the Pee Wee Homes project did,” said the Rev. Lisa Fischbeck, vicar of the Advocate. “We knew we wanted ours to be a community space. So as we thought about what we might do, we started to look at what was offered around us and then focus on what wasn’t, so we could fill that need.”

Often lost in the excitement of urban development is the cost paid by the displaced plants and animals. It is not simply a matter of soil and foliage now covered with asphalt and concrete; plants and “natural spaces” installed for the new developments are not necessarily compatible with native flora and fauna.

And though the new spaces may be full of beautiful flowers, plants and eye-catching flora, native plant species and the benefits they provide should never be easily discounted or dismissed. They are a necessary part of the comprehensive ecosystem and play a role in nature’s system of checks and balances. Native plants complement one another to ensure survival and work to inhibit invasive species. They are designed by nature to adapt to and thrive in geographic seasons and weather cycles, and they provide food and shelter for local wildlife. Once established, native plants also need far less maintenance than their imported counterparts, as they are designed to flourish in the areas they call home.

Advocate envisions the Piedmont Patch as a sanctuary for displaced flora and fauna, a sanctuary described on the website as “grounds enriched with diverse, well-adapted native plants that will attract and nurture an array of wildlife, including butterflies, bees, birds, frogs, turtles and small mammals.”

“The Piedmont was originally like a prairie,” said Fischbeck. “In fact, it has been called the Piedmont Prairie. Most of the grasses brought in to the area today are not the grasses you’d find on that prairie, and that affects everything from the bugs to the animals.

“Our hope,” she said, “is not just to restore our five-acre patch but to educate and inspire others to do what they can as well. It doesn’t matter whether it’s a window box or a farm—anything anyone can do to help restore the Piedmont has a positive impact.”

This vision is not a dream, but an already flourishing reality. The pond was restocked with bass, brim and catfish to encourage fishing by the neighbors who have fished it for generations. In April 2018, 30 volunteers—including local garden clubs, landscapers, amature botanists, (environmental) faculty and students from Duke and the University of North Carolina, staff and volunteers from the North Carolina Botanical Gardens, and members of the Advocate—planted more than 1,000 native grasses and wildflowers around the Advocate Pond and throughout the five-acre site. Signage accompanied the installation, providing photos and information about each plant.

It didn’t take long to see results. By summer, flowers were blooming, bees were pollinating and volunteers from the New Hope Audubon Society had installed bird boxes to encourage the return of bluebirds and brown-hooded nuthatches. The Johnson Service Corps installed an irrigation system to assist in watering the vegetable garden and other parts of the property.

As the plants have grown, so has the interest in the project and the importance of bringing back the regional plants.

The project was never meant to be kept a secret. In fact, one of the components proposed in its grant application was the development of “digital and other educational resources for sharing in the community.”

A website was the natural place to start. Visitors to piedmontpatch.org can follow the progress of the project while learning about the various species planted or picking up tips on things like creating a pollenating garden. The website also provides resources for learning more about topics such as native plants, invasive species and foodscaping, the practice of growing edible plants alongside ornamental varieties.

The Advocate also hosts quarterly presentations by professionals from the universities, the botanical gardens, local nonprofits and more. Advertised on Facebook and other social media channels, 60%-80% of those who attend are members of the surrounding community.

“We have been moved by the generosity of the botanical community,” said Fischbeck. “There are many outside the Church who have much to teach us, and in turn the work becomes a form of evangelism for us. We as a Church can’t do all this work alone, and collaborating with governmental and academic entities as well as those within and outside of the Christian faith not only teaches us, it allows others to see what we as Christians are about.”

The dream is to continue to extend the connections across generations. It is a hope of the project partners that, funds permitting, they may someday be able to hire an intern or graduate student to help document the project and start creating connections with local schools so students can come visit and learn. 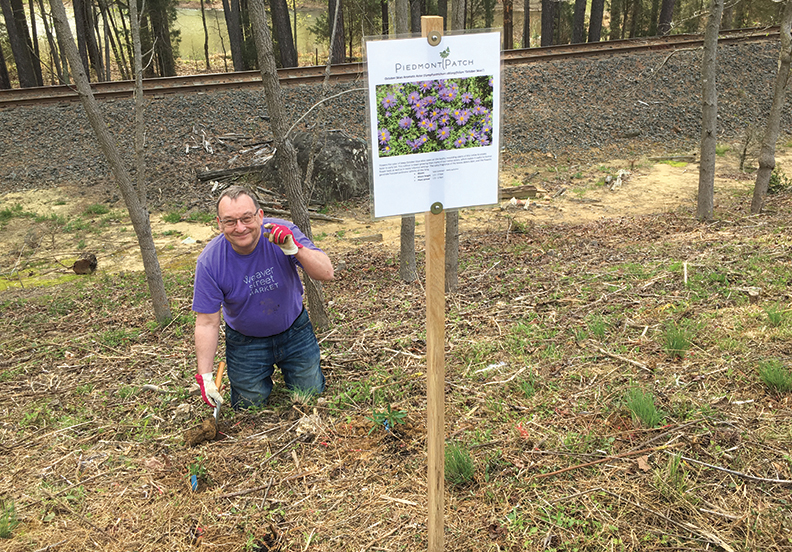 The Piedmont Patch is open to visitors whether the visit is scheduled or unscheduled. Those who stop by are encouraged to walk the path around the pond and enjoy the signs that help identify what’s growing. Take a look at the bees at work, or peek in the bird boxes to see if a bluebird is in residence. Catch-and-release fishing in the pond is available, picnic tables stand waiting, and the chapel is open to all who might like a moment of indoor prayer or contemplation.

For the former nomads of the Advocate, creating a haven so welcoming to others only deepens their own roots. The Piedmont Patch Project has “helped to integrate new people and create community both inside and outside the church,” said Fischbeck. “We learn from each other, from the professionals that come in and from the land itself. It’s really deepened our understanding of Creation Care.”

For those looking for their own seeds to plant, Fischbeck recommends first looking inward. “Creation Care is awfully big,” she said. “Start in an area that means something to you, and learn and build your awareness from there. It will spread exponentially as you start to see connections all around you and feel how connecting with creation deepens our connection with God.”