Disciple: The First Line of Help 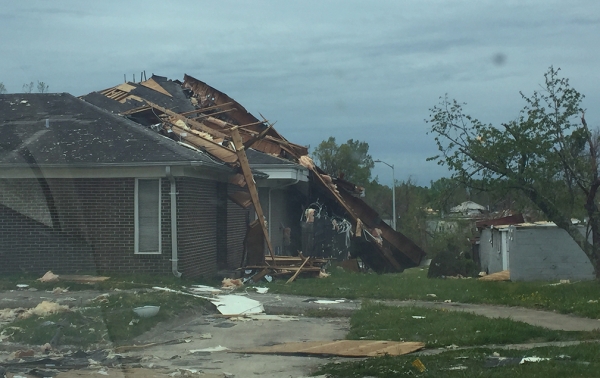 How churches rallied together after a devastating tornado struck Greensboro

Early in the evening on April 15, an F2 tornado reaching top speeds of 135 mph hit some of Greensboro’s poorest neighborhoods. The storm knocked out power to 85,000 households, destroyed three elementary schools and approximately 100 houses, and killed one resident whose car was hit by a falling tree. While recovery from a major natural disaster—especially an unexpected one—is always a long-term project, the difficulty increases when the affected neighborhoods struggled even before the storm hit.

“Around the end of the month, a lot of the folks we met after the tornado, as bills come due, are requesting help,” the Rev. Audra Abt, vicar at Holy Spirit, Greensboro, explained during the last week of July. Because the storms caused disruptions to people’s work schedules and created unexpected expenses like home and car repairs, hotel stays and transportation, many economically fragile members of the Greensboro community have yet to return to the level of stability they had before the tornado hit.

Fortunately, the churches located nearest to the neighborhoods devastated by the storm—Holy Spirit, Church of the Redeemer and Puerta Abierta (the Open Door) house church—were able to pool resources to aid in the recovery effort. Churches, both within the Greensboro convocation and across the Diocese of North Carolina, reached out to contribute funds, supplies and resources to the recovery effort. In addition to helping people with immediate needs like food and transportation, donations allowed Holy Spirit to help a local domestic abuse shelter cover the repairs insurance wouldn’t after a tree fell on the house. The Diocese was so generous, in fact, Abt was able to save some of the donations to assist people with long-term recovery, like filling some of those end-of-the-month requests.

“The support from the convocation and the diocese gave me a sense of why we’re a diocese,” Abt said. “People were so generous.” Churches called and texted to ask if specific contributions—like a donation to the rector’s discretionary fund—would be helpful, an approach Abt appreciated because it took some of the pressure off her to decide what she should request.

One such call came from Maureen Flak, the parish nurse at Holy Trinity, Greensboro, who has experience with disaster response. When Abt told her Holy Spirit would like to host a community meal for those affected by the storm, Flak asked only for an estimated headcount, and then the people of Holy Trinity organized the meal and brought it to Holy Spirit.

Part of the work in the convocation was coordinated through a gathering arranged by the Rev. Canon Earnest Graham. Other relief efforts started in congregations, like Holy Spirit organizing groups of parishioners to partner with grassroots groups and canvas the church’s neighborhood assessing damage, or Holy Trinity running a drive that collected 200 bags of food for a local food pantry.

The Rev. Sarah Carver, assistant to the rector at Holy Trinity, reported that parishioners also self-organized or volunteered on their own.

“The community did a good job of pulling together,” she said. Abt concurred.

While the Greensboro convocation did an excellent job of responding to the April 15 tornado, the aftermath of a natural disaster always offers the chance to reflect on how to better prepare for the next disaster. Here’s what we learned.