Disciple: The Abundance of Community

Abundant Life Ministries began in 2019 as a health outreach ministry to economically and medically vulnerable people in north Greensboro. Its roots extend back to at least 2017, however, when the Rev. Audra Abt, at the time serving as a diocesan missioner in Greensboro, worked with the people of Holy Spirit, Greensboro, to discern how best to engage their neighbors through a series of neighborhood walks. The walks were intentionally relational; as parishioners met their neighbors, they collected prayer requests and prayed with and for those who asked for it. As they prayed through the requests after the walks, they noticed health problems arose as a common concern.

The people of Holy Spirit called Abt to be their vicar in fall 2017, and the first Holy Spirit health fair took place on June 23, 2018. That first health fair and those that followed involved volunteers from organizations as diverse as the congregational nurse program through Cone Health System, the Center for New North Carolinians, the Mental Health Association of Greensboro, and volunteers from Holy Spirit, Holy Trinity and St. Francis, Greensboro. The health fairs served to deepen budding relationships with neighbors, serving as much as fiestas—complete with food and children’s games, crafts and face painting—as serious health initiatives.

Over time, the health fairs transformed into a full-fledged ministry, Abundant Life, which, in addition to health services, provides weekly hot meals and grocery and diaper distribution. At least, it did until COVID-19 led to restrictions on in-person gatherings.

ADAPTING TO A TIME OF GREATER NEED 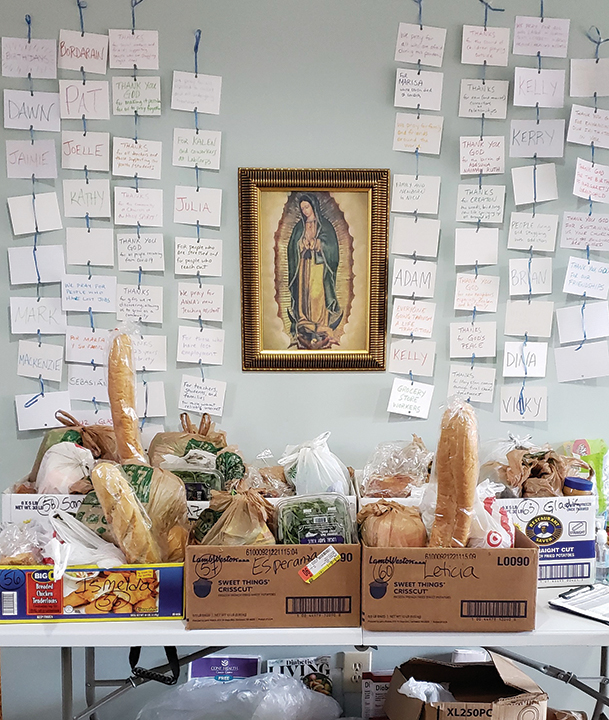 Abt needed to find a way to adapt the ministry at Abundant Life. In-person community meals became impossible, so eight to 10 volunteers drivers began delivering food to approximately 60 families in neighborhood clusters each week. Some of those delivery drivers came from the communities—people picking up food for themselves while also taking extra boxes of groceries to deliver to their neighbors—while others were volunteers from other Greensboro Episcopal churches: St. Andrew’s, St. Francis and Holy Trinity, since many members of Holy Spirit are themselves medically vulnerable or do not have access to transportation.

While these modifications allowed Abundant Life to continue meeting neighbor’s physical needs, the heart of the ministry has always been building community, a task which seemed impossible during a time when people are encouraged to socially distance themselves and self-isolate.

Things changed when George Floyd died as a result of police brutality. Through the month of June and into July, drivers reported encounters they were having with neighbors who came to the door to pick up the groceries volunteers had just dropped off on their front stoops.

“[Driver’s] testimonies were about people coming to the door and calling them back from their cars saying, ‘Wait, wait, we need to pray’—for everything from Black lives need to matter, to me and my family are having a really hard time having any space for compassion in our hearts for those police officers….‘We need to pray,’” Abt explained.

“And these mostly white volunteer drivers are saying, ‘I didn’t know what to expect, but we stood there and prayed at a distance, and the Holy Spirit was there and moving, and what I thought the problem was, I saw in God’s eyes as so much bigger and so much more fundamental than race or Black and white of any of the things I thought were the problem.’”

And so a new form of community emerged as drivers requested to remain on the same routes each week in order to continue forming prayerful, neighborly community with people who are not their geographic neighbors, and who, in many cases, have very different lived experiences. While Abt knows these communities might grow into something else in the future, for now, she recognizes these encounters as what church—what community—looks like during a time of pandemic. 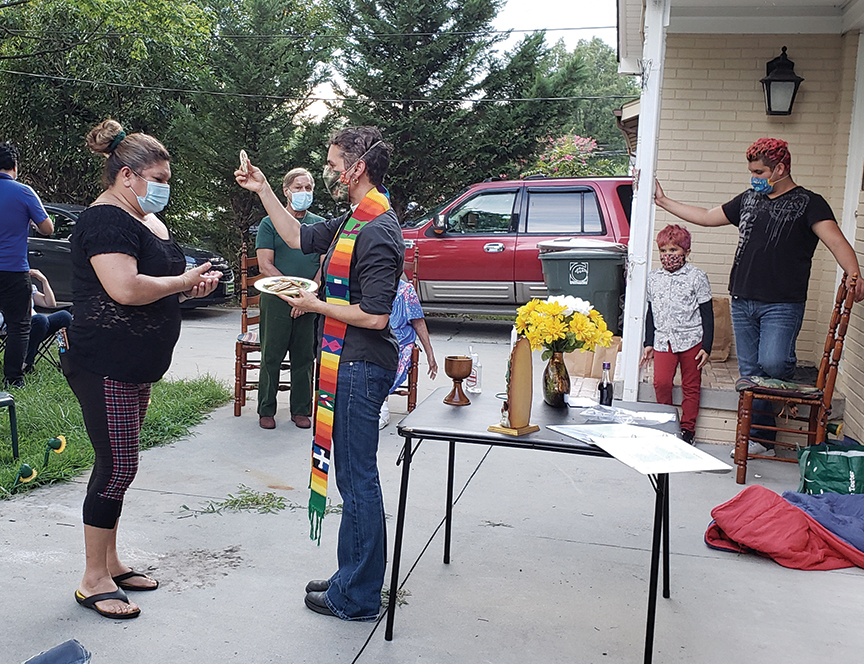 In addition to changing how Abundant Life administers direct service, the pandemic has also opened the possibility of in-person worship in people’s front yards as neighbors connected to the ministry miss their own church communities. Abt regularly conducts family or neighborhood worship with community members who have a personal relationship with the ministry. That relationship, too, has evolved as Abt learned about the worshipers’ expectations around time, communication, cancellations for weather and safety arrangements. Abt is, for the time being at least, these families’ priest, but she has not pushed them to join Holy Spirit or another congregation.

“This is what The Episcopal Church needs to learn from and learn about being church in the world,” Abt said. “This is part of Abundant Life, but none [of the community members] would know themselves as Abundant Life church or community. Yet.”

Building beloved community is the work of our church, and, while it might seem now is a particularly difficult time to accomplish that work, being forced to let go of what we’ve done in the past and reimagine our life together might be the key to building true community. Below, Abt shares some of her learnings.

Service among neighbors is not antithetical to building Christian community. There does not need to be a divide between worship and service.

There does need to a be a genuine relationship between the church and its volunteers and the people they serve before a service relationship can transform into a prayerful relationship.

Presume the people you encounter bring with them a spiritual integrity—something to contribute, not just receive.

The fundamental question is one of orientation; if people are objects of need, you cannot build a community of mutuality and respect.

Seek out ways to interact with people in public encounters that are not church-related or dictated by your title or role. Talk to people in the grocery line or somewhere similar to practice being open and developing relationships. “That’s been one of the most regularly human interaction times I’ve had in this whole pandemic is shopping and having wonderful, open conversations across that little plastic window,” Abt said. “That’s part of where my pastoral ministry is right now.”

Be willing to experiment and accept not all experiments will succeed.

Here’s the hardest one: Radically let go of expectations. Now, more than ever, we are forced to grapple with this reality. If we are not naming and claiming what we’re choosing to let go of, we’re not really letting go of it.