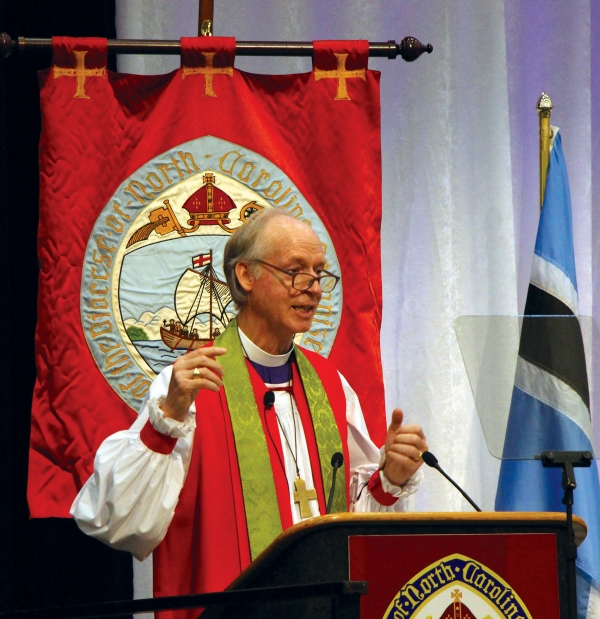 The 207th Annual Convention took place November 18-19 at the Benton Convention Center in Winston-Salem. With online offerings, drive-in gatherings and a Special Convention in March 2022, this was the fifth Convention of the Diocese of North Carolina in the last three years.

But this one felt different. As staff gathered on Thursday afternoon to run through the plan for the coming days, everyone present remarked that the convention hall felt different. It felt like a return to full life, with hundreds of places set for delegates and a full agenda ready to go.

The theme of Convention was Creation Care, one of the diocesan mission priorities and a timely topic with the international COP27 gathering having just finished in Egypt. Throughout the course of Convention, Creation Care was examined on a local and global level, attendees reflected on our spiritual call to care for our earthly home, and, as a Diocese, we reaffirmed our commitment to take action to halt and reverse the course of climate change.

Before the official start of Convention, the traditional Thursday Night Program offered a look at “Creation Care Across the Communion.” Led by the Rev. Dr. Leon Spencer, chair of the Global Missions Committee, and David McDuffie, chair of the Chartered Committee on Environmental Ministry, the program provided a look at Creation Care on a global scale, sharing the work happening not just in The Episcopal Church but across the Anglican Communion. The Rev. Jill Staton-Bullard offered the program’s message succinctly, saying, “Everything we do must serve our community, locally and globally.”

Throughout the evening, attendees heard stories from members of diocesan churches engaged in the work of Creation Care, as well as of efforts being undertaken in partnership between the Chartered Committee on Environmental Ministry and the Global Missions Committee. Time was dedicated to small group discussions to give those participating the opportunity to share their own stories and gather inspiration for their own local work. A highlight of the evening was hearing about the positive impact of the Haiti Reforestation Project, an initiative that started planting trees several years ago in an effort to prevent deadly mudslides like those that had devastated the island during hurricanes.

It was an evening of perspective, energy, urgency and, ultimately, hope that the work we do must, can and does make a difference.

The 207th Annual Convention opened with Holy Eucharist, during which the Rt. Rev. Sam Rodman delivered his sermon and address. He laid the theological foundation of our call to care for creation, noting Creation Care is “a vital and essential part of the mission of the 21st-century church,” as “all of the compelling reasons to focus our energy around Creation Care have their roots in the biblical narrative.”

He took worshipers back to the start, when the call to care for creation began with the story of creation itself. “Creation is the first witness to the power and glory of God,” he said. “This is a universal human experience. Every one of us has had moments when we felt the presence and power of God in the beauty of the earth. We have all felt the awe and wonder in the beauty of what God has made.”

But we should not be mistaken that the earth was given to us, and we cannot see ourselves as things apart from it. “The earth is not ours,” said Rodman. “We belong to the earth. As the earth goes, so we go. Our destinies are linked.” Those destinies include more than our physical selves. “Our redemption and salvation in Jesus is connected to God’s plan for the redemption and liberation of all of creation,” he said. Creation Care is not a political agenda; it is bigger than labels. The health of this earth we call home, the abundance it provides or the scarcity of its resources are all dependent on us and how we care for it. And how we care for it is a reflection of how we care for each other, reinforcing once more why we are called to this work, both as the Church and as part of the global community. 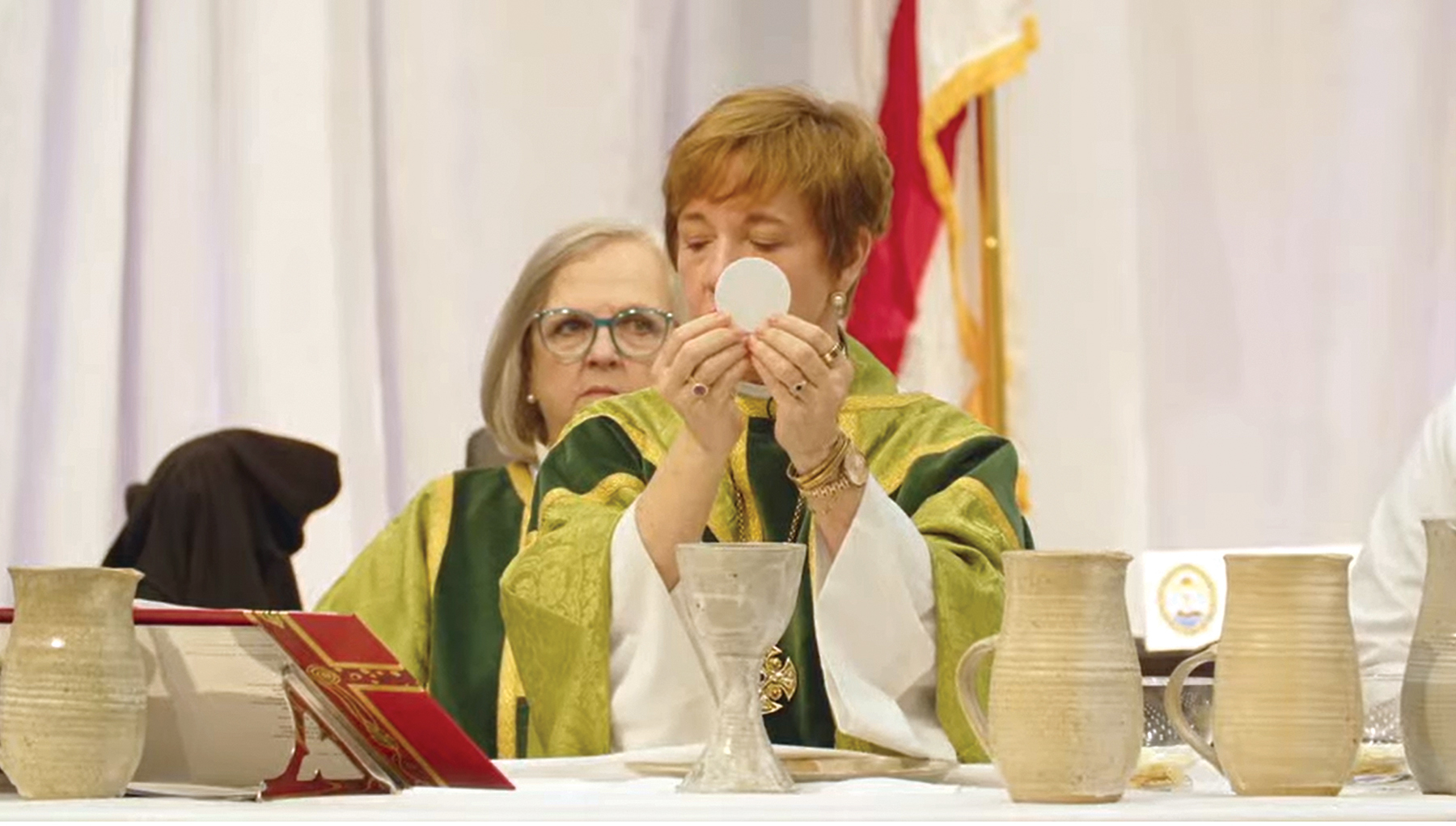 One of the most joyful moments of Convention was the official welcome of the Rt. Rev. Jennifer Brooke-Davidson as assistant bishop of the Diocese of North Carolina. Unlike other types of bishops, assistant bishops are appointed but voted on by Convention. The vote was unanimous and done by standing ovation. Brooke-Davidson then took the podium to address the Diocese for the first time, expressing her happiness at being a part of the Diocese of North Carolina and discussing her passions: sharing the Good News as a follower of Jesus; the providence of her first Convention focusing on Creation Care, something for which she and her husband, Carrick, an environmental attorney, have worked their entire adult lives; and her formation growing up in South Texas, which impacted her understanding of and appreciation for the complexity of culture and the beauty and gifts to be found in every setting.

The keynote speaker at this year’s Convention was the Rt. Rev. Dr. Marc Andrus, bishop of the Diocese of California. He is one of the Episcopal Church’s foremost leaders in environmental advocacy, and he traveled directly to North Carolina from Sharm El-Sheikh, Egypt, after attending COP27, the international gathering on climate change and action.

Andrus presented two keynotes during Convention. The first took place on Friday and focused on the impact the work such as that done in the Diocese of North Carolina has on the wider world. As Andrus said, “The global always starts with the local.”

During his presentation he wore a scarf, one of several knitted by a woman in Queensland, Australia, and sent to COP27 to be given to faith leaders. The colors of the scarf ranged from blue to red, the blue end representing temperatures on the earth in the pre-industrial age, and the red representing the changes to the earth’s climate since the dawn of the industrial age. He noted the age in which we are living now started approximately 400 years ago, the interceding time frame marked by a departure from the concept of the earth as sacred and replaced with a thought process of the earth as an object to be used as a resource. He explored the impact of that way of thinking, that its detriment goes far beyond the destruction of the earth itself. Seeing what is sacred as an object to serve us affects every element of life, including our relationships with each other. There is no denying we are experiencing the consequences of that way of thinking, but he shared the hope held by those involved in the work of healing—the earth and each other—and how it will be done with the help of divine love. 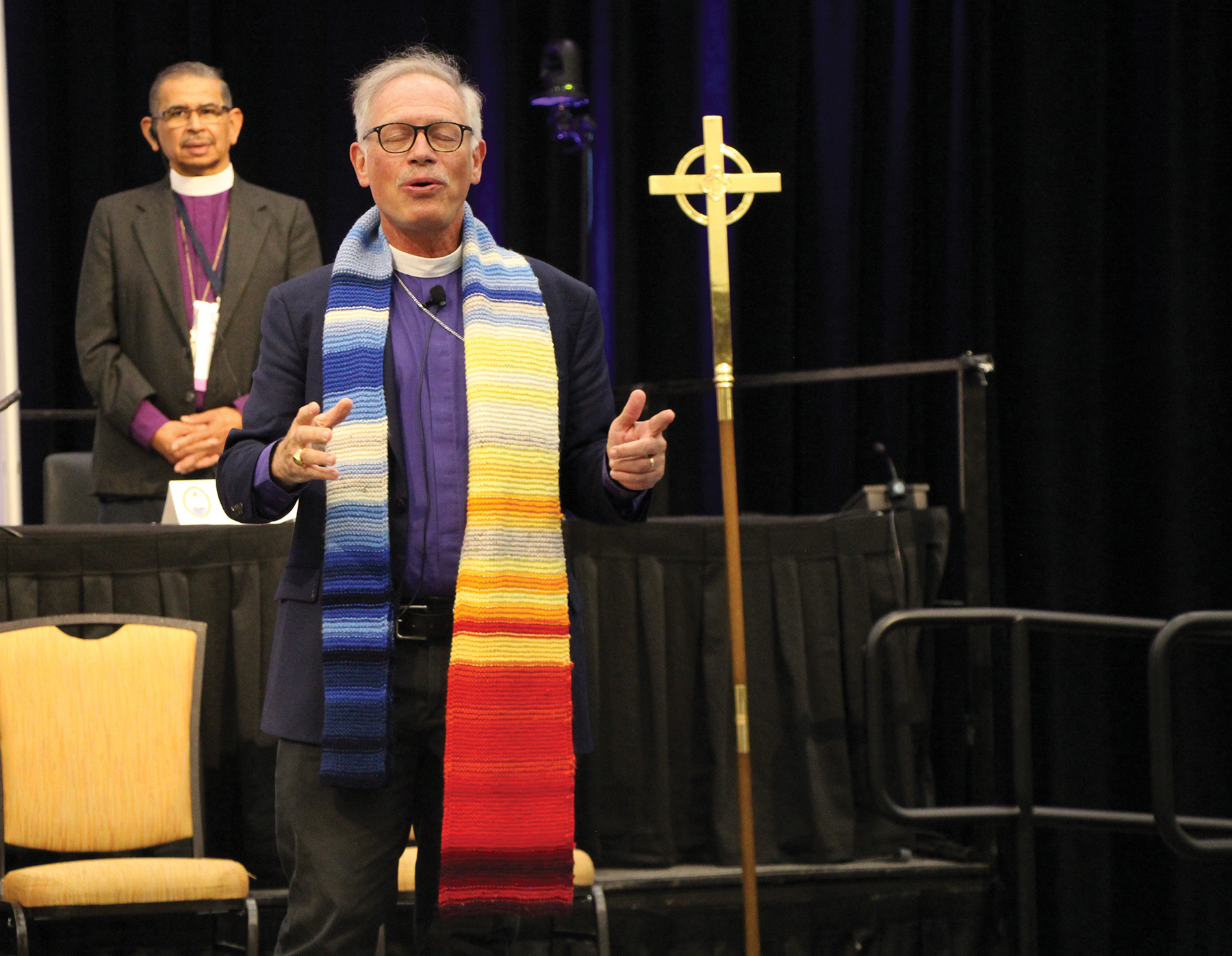 [Image: The Rt. Rev. Dr. Marc Andrus, bishop of the Diocese of California and noted climate activist, keynoted, leading the hall in prayer and song. Photo by Summerlee Walter]

Saturday’s keynote invited those in attendance and watching at home into conversation and an examination of the faith foundation that can guide us in the work of Creation Care. Andrus shared a resource now available to all: COP Prayer Cards, each of which includes Scripture, a meditation and a prayer. The invitation was to introduce these tools for use in a daily prayer practice, reaffirming the foundations of our faith and guiding us each day in the work of Becoming Beloved Community. The COP Prayer Cards shared during the Saturday keynote are available in the “Get Started” section at episdionc.org/creation-care.

A TRIBUTE TO BISHOP ANNE

Friday closed with a special event, as those gathered took time to pay tribute and say farewell to the Rt. Rev. Anne Hodges-Copple, bishop suffragan of the Diocese of North Carolina, who is officially retiring at the end of 2022. Hodges-Copple led the Evensong service, after which she was feted by speakers, both live and via video, sharing memories and gratitude for her years of service to the Church, not just in her role as bishop suffragan but also during the years that came before, when she served the Diocese long and faithfully as a priest.

Before the tribute’s close and the start of the bishops’ reception, Rodman presented Hodges-Copple with a final parting gift: The Bishop Anne and John Hodges-Copple Creation Care Fund, a new fund dedicated to education and the encouragement of new actions and thought processes around Creation Care, through formation and efforts that benefit the earth and its inhabitants. The fund is also intended to facilitate the walk with churches, to help them connect Creation Care with racial and social justice, to commit to climate stabilization through emissions reductions, to restore the earth using natural systems, to engage in environmental advocacy, and to find and explore points of intersection with other mission priorities. The fund was established by the Diocese with a $5,000 start, and the offering from Convention was added to it. 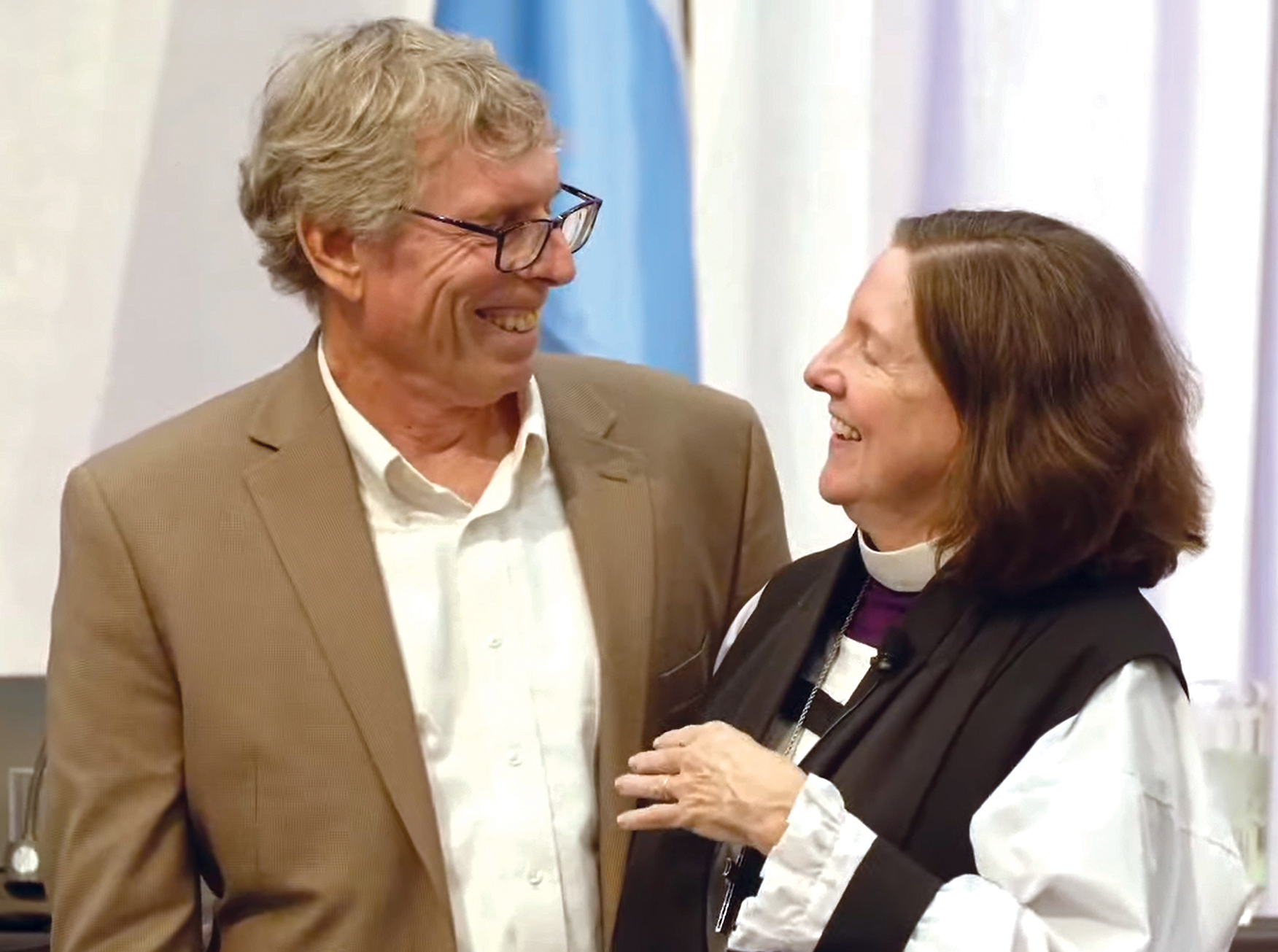 [Image: The Rt. Rev. Anne Hodges-Copple invited her husband, John, to accompany her on stage during her retirement tribute. Screenshot by Christine McTaggart]

The Bishop’s Award was presented to the Rev. Dr. Leon Spencer in recognition of his tireless work with Global Missions, not only as chair of the committee but also for the years he has spent cultivating global partnerships. He was instrumental in forming St. Augustine’s School of Theology, a school of ministry that has had an incredible impact on the development of ordained and lay leaders in the Diocese of Botswana. 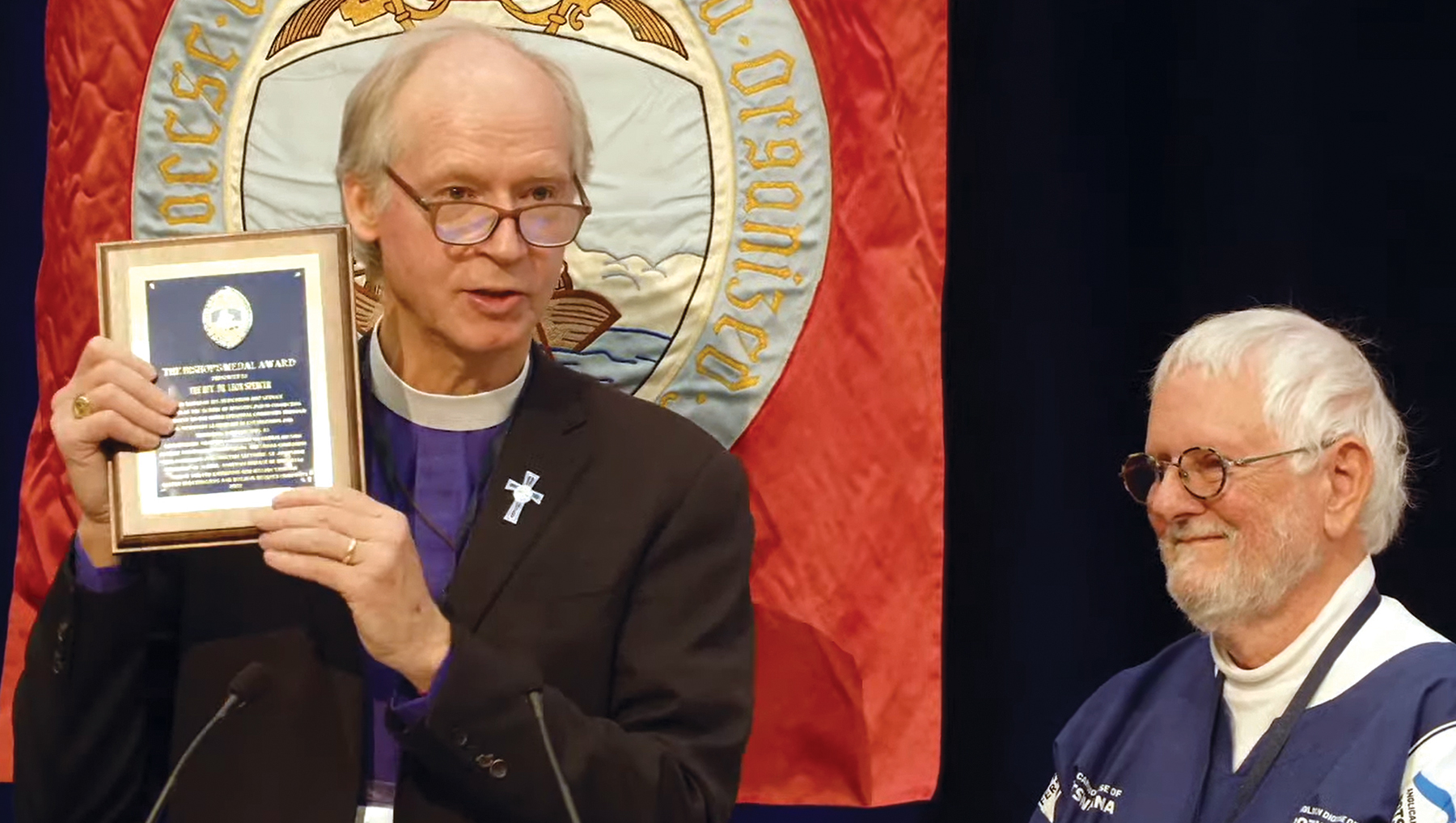 The Bishop’s Award was not the only award presented during Convention. All Saints’, Concord, was presented the Rev. Thomas Droppers Memorial Green Congregation Award for their work best summarized by the stated goals of the Global Communion Forest launched by the Anglican Communion at this year’s Lambeth Conference: to “significantly increase Anglican tree growing and landscape protection around the world and deepen care for creation within the life of the Church.” All Saints’ has done that through programs such as the Energy Saving Trees Program through the Arbor Day Foundation, the Native Plant Demonstration Garden, the Native Plant Nursery, the All Saints’ Arboretum of Native Trees and the All Saints’ Garden.

The spouses and partners of diocesan clergy were also in attendance and enjoyed lunch together on Friday. Hosted by Deb Rodman, the lunch featured a presentation by members of Nativity, Raleigh, to talk about Creation Care and Nativity’s congregational initiatives.

Though Creation Care was the focus and theme of Convention, a new traveling display in the area of  Racial Reckoning, Justice and Healing made its debut. The six panels, “Telling Our Stories,” feature the contributions made by Black Episcopalians throughout our diocesan history.

One of the favorite moments of Convention was provided by the youth delegation. As the last legislative session started Saturday afternoon, they led the hall in an energizer. Set to “Revolution” by Kirk Franklin, they taught everyone the dance steps to go with the song and then turned it up to see the entire convention hall on its feet, dancing, smiling and energized for the final pieces of the business agenda.

THE BUSINESS OF CONVENTION

The 2023 budget passed as submitted.

Voting on resolutions went as follows. Certified copies of all resolutions are available on the diocesan website.

If you want to enjoy even more, including videos of the bishops’ addresses and the keynote address, click here.