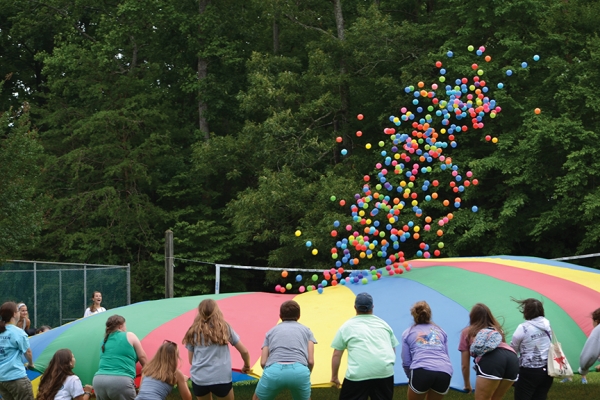 When you ask Lisa Aycock what the best thing about HUGS Camp is, she’ll laugh and ask, “Besides being the coolest camp ever?”

Aycock is a youth missioner for the Diocese of North Carolina and the driving force behind HUGS (Helping Understand God Through Sharing). “A unique camp for unique people,” as all of its marketing materials proclaim, HUGS pairs campers with a variety of special needs with high-school helper campers whose sole task for the week is to help their campers participate fully in summer camp. Some campers use motorized wheelchairs to get around, feeding tubes to eat or assistive devices to hear. While most communicate verbally, others use picture boards or communicate only through facial expressions. Regardless of each camper’s abilities, however, the camp staff adapts every activity to include every camper. Whether it’s swimming, relay races, crafts or the annual talent show, everyone has equal access to a traditional summer camp experience. 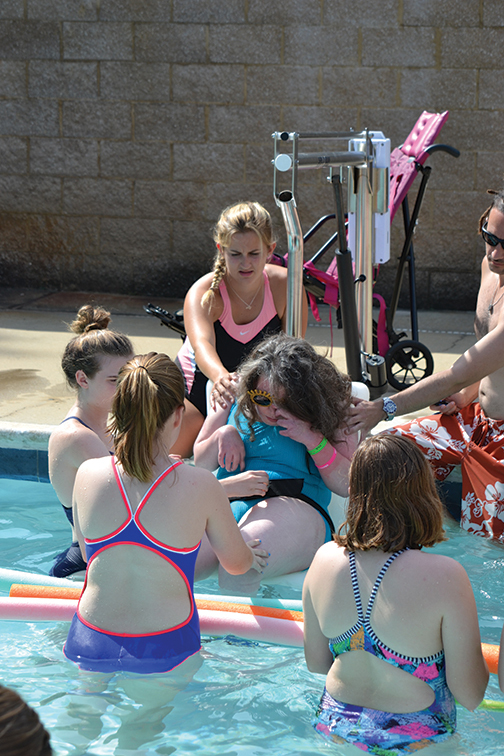 A lot of work goes into running this regular camp, however. Signing up as a helper camper is a serious commitment for the dozens of high school students — many of whom return year after year — who attend each summer. All helper campers learn how to do bed lifts and chair transfers, assist in toileting and showering, clean feeding tubes and communicate with campers who are nonverbal. Not all helper campers will need all of those skills to assist their assigned camper, but they are all prepared to fill in should a fellow helper camper step away for a moment. Remarkably, the helper campers are not paid for their service. In fact, they pay a fee comparable to a week of summer camp in order to help their fellow campers get showered and dressed, eat their meals, navigate social situations and, most importantly, have fun.

The helper campers are there because they, like their camp buddies, love to be at HUGS.

“Every time I think about what is HUGS Camp, I think about energizers in the morning,” Kate Akerman, a six-time helper camper and three-time HUGS camp counselor, said. “I picture singing so off-key, so loudly, laughing our heads off. I think about pool time and carnival night and everything just being laughter. We had a bathroom incident that ended with poop everywhere, and that’s normally something that would be so frustrating — nobody wants to clean poop — but we were all just laughing and our camper was laughing. HUGS Camp just brings a magic to every moment.”

For many helper campers, the HUGS experience is so powerful it transforms the course of their lives. Two helper campers from Virginia recently started a club at their school to help students recognize the dignity in all their peers. Helper campers from a Pentecostal church have started a weekend camp modeled after HUGS. For others, the impact of HUGS extends to their vocational discernment. Former helper campers have pursued careers in special education, occupational therapy and genetics.

“Their whole vocation has been impacted from volunteering at HUGS Camp,” Aycock explained.

Akerman is one of those helper campers. After earning a bachelor’s degree in Recreation Management with a concentration in camp management from Appalachian State and working in camps full-time for a couple years, she is now the anti-bullying coordinator for the LGBT Network Bay Shore Center in Long Island, New York. 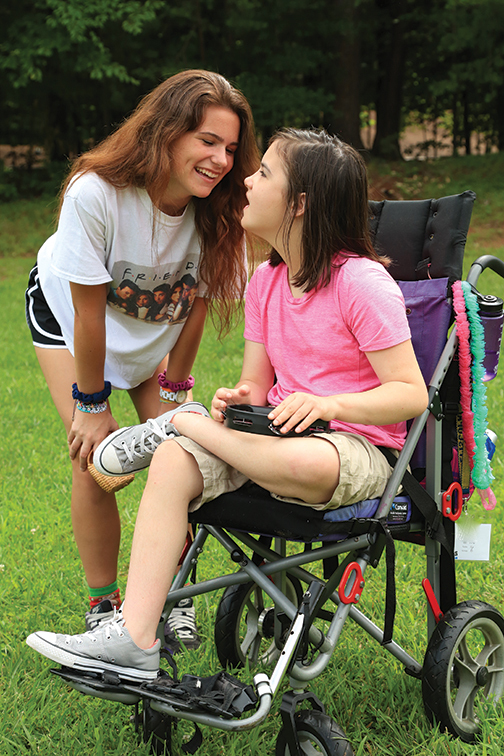 Ben Hatley, who has been involved with HUGS in varying roles since the summer after his freshman year of high school in 2008, also found his calling through his time at HUGS.

“It really was a direct influence on my career path,” he said. “I always told people I wanted to continue working with this population as a hobby, but when the engineering plan was scrapped [after his first two years of undergraduate school], I turned to HUGS, what I had always loved to do, and that absolutely led me here.” Here is a bachelor’s degree in psychology and a graduate degree from Auburn University’s Applied Behavior Analysis master’s program. After his graduation in May, Hatley will take a position working with children and young adults with autism at an autism and behavioral health center in Birmingham, Alabama.

“What I would tell people when I was trying to get them to HUGS is that was where you could see the love of God and what the church is supposed to be and what ministry is supposed to be so clearly,” Hatley explained. “It’s a week full of love where the high schoolers would empty themselves — just give everything they have and love these campers — and the campers would love them back, unconditionally love them back.”

For the campers, too, the HUGS experience is life changing. Campers range in age from 11 to 39. Because HUGS has no upper age limit, the top age will probably continue to increase. The flexible age range has allowed some campers to attend HUGS camp for decades.

“HUGS camp is the epitome of the way Christ wants us to live,” said Pam Love, whose son, Taylor, has attended HUGS Camp for more than 20 years. “It’s a place of unconditional love. [My son and I] have been here almost from the beginning, and this is the highlight of Taylor’s life and a very important part of mine.”

As HUGS Camp promises, through sharing their lives together for one week each summer, the campers, helper campers and adult staff members truly see God. The experience resonates throughout their lives in ways both profound and life-giving.