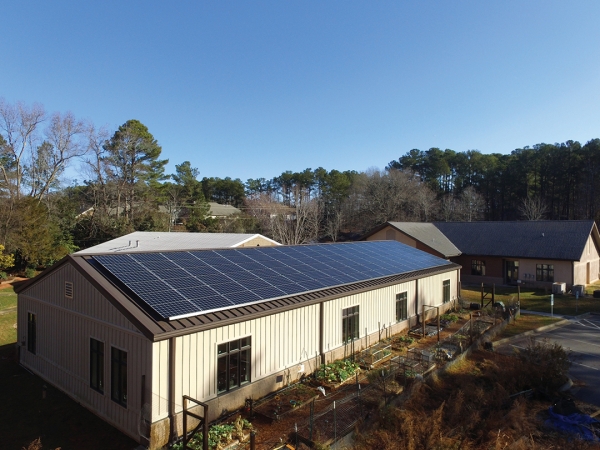 The cost savings are significant, but ultimately, St. Andrew’s, Greensboro, viewed installing solar panels on the church as an act of mission, a way to redirect resources toward serving the community and saving the environment instead of maintaining the church building. Since their installation in spring 2020, St. Andrew’s panels have generated 28.86 megawatts (MW) of power, which equals 45,090 lbs of carbon dioxide saved. That’s the equivalent of 51,401 miles driven, 22,606 pounds of coal burned, or 2.5 homes’ worth of annual energy use. Put another way, St. Andrew’s has saved the amount of carbon sequestered by 25.1 acres of U.S. forests in one year. That’s impressive for a single roof’s worth of panels.

“The driving force for us was we strongly believe and have a conviction of taking care of our community, and this was a part of it,” St. Andrew’s treasurer Chris Berger explained. “A lot of people talk, and we wanted to put our actions where our words are.”

Growth in the church’s mission and ministry was actually the force that made the parish examine its electric bill in the first place. The congregation was growing, more activities were taking place in the building throughout the week, and there was an increased demand for space in the church from outside groups. All of this led to a higher electric bill.

As a result, St. Andrew’s joined a growing number of churches in North Carolina, including Nativity, Raleigh, and St. Philip’s, Durham, installing solar panels. Care for creation, a desire to use resources for mission instead of building upkeep, and some enticing financial incentives are the reasons churches cite for embracing this clean energy.

“Caring for creation is woven into the fabric of our relationship with God,” the Rev. Ginny Inman, rector of St. Andrew’s, explained in her solar energy presentation to the virtual diocesan gathering held in November 2020. 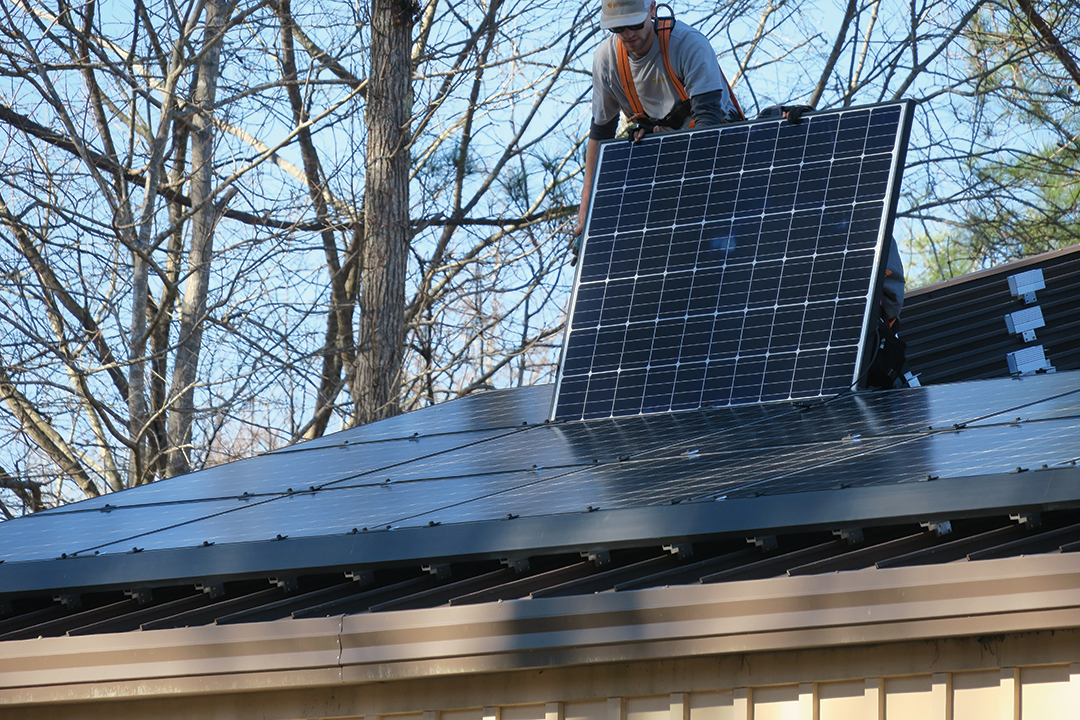 Sigel’s congregation, Church of the Nativity, Raleigh, has long embraced sustainable practices, like composting and recycling, carbon recapture and community gardening, through its Zero Waste Church initiative. In 2014, the vestry set a goal of becoming a net-zero church by 2030. Since beginning seriously to research solar energy in 2015, the church has been strategic in making the switch, opting for a step-wise approach. For example, because removing and reinstalling solar panels is expensive, Nativity decided to wait to install them on the sanctuary until the aging roof of that building needs to be replaced. Because the church opted for a donation-based model of funding the panels, there were also financial considerations to installing solar panels only on the education building at the outset. That structure’s south-facing roof, ideally situated for capturing the sun’s energy for as long as possible each day, also made it an appealing place to start.

Ultimately, Nativity contracted with Southern Energy Management to install the panels on the education building in 2018. The project cost $75,000, and the church received a $24,000 rebate from Duke Energy and a $5,000 green grant from The Episcopal Church. The rest was raised through private donations. In the pre-pandemic years of 2018 and 2019, Nativity realized an average savings of $5,500, which the church redirected toward outreach. The solar panels currently supply approximately 35% of the campus’s electricity needs. Sigel calculates the panels will pay for themselves in 10 years and projects Nativity could reduce its energy consumption by 90% with the installation of additional panels and an updated HVAC system.

While Nativity was able to fundraise the full cost of installing solar panels, many other churches opt to lease them. St. Andrew’s leases from Eagle Solar and Light through the company’s lease to own program. The panels have reduced the church’s monthly electric bill by 50-55%, but the system as a whole currently is cost-neutral once the leasing payments are taken into account. The church has the option to purchase the lease from the company for the residual value of the panels in year 10, and Berger calculates the option becomes very financially attractive after 13 years. The panels and inverters are projected to last 25 years, with only a 15% drop in efficiency by the end of their lives. (High-end panels with as little as 5% degradation are also available for a premium.)

St. Andrew’s also received a rebate from Duke energy, as well as a $10,000 green grant from the Diocese of North Carolina to help fund the solar panels.

While both the cost savings and the buffer solar energy provides against rate increases are appealing, Berger views St. Andrew’s investment in renewable energy as ultimately mission-driven: “How do we do something good by our belief and be good shepherds of our resources?”

St. Philip’s journey toward installing solar panels arose from similar conversations. When long-time parishioner Hildegard Ryals died in 2012, her bequest to the church was earmarked to fund projects that aligned with her passion for creation care, children’s ministry and outreach. The Ryals Committee, formed of parishioners who knew Ryals, taking seriously her commitment to “air, water and earth,” created the AWE Fund to finance larger projects with annual contributions from her endowment. After several years, the AWE Fund had grown enough to finance Ryals’ long-time dream of installing solar panels on the church.

The timing worked out well with the solar rebates Duke Energy Progress was offering; the church’s $30,000, 12.4 KW system, installed on the parish hall in the fall of 2019, yielded a $10,800 rebate from Duke. Since then, the system, installed by YES Solar Solutions, has generated approximately 10% of the church’s electricity needs, and the system will pay for itself in about 16 years. The system has already saved 38,233 lbs of CO2 emissions, which is equivalent to planting 282 trees. 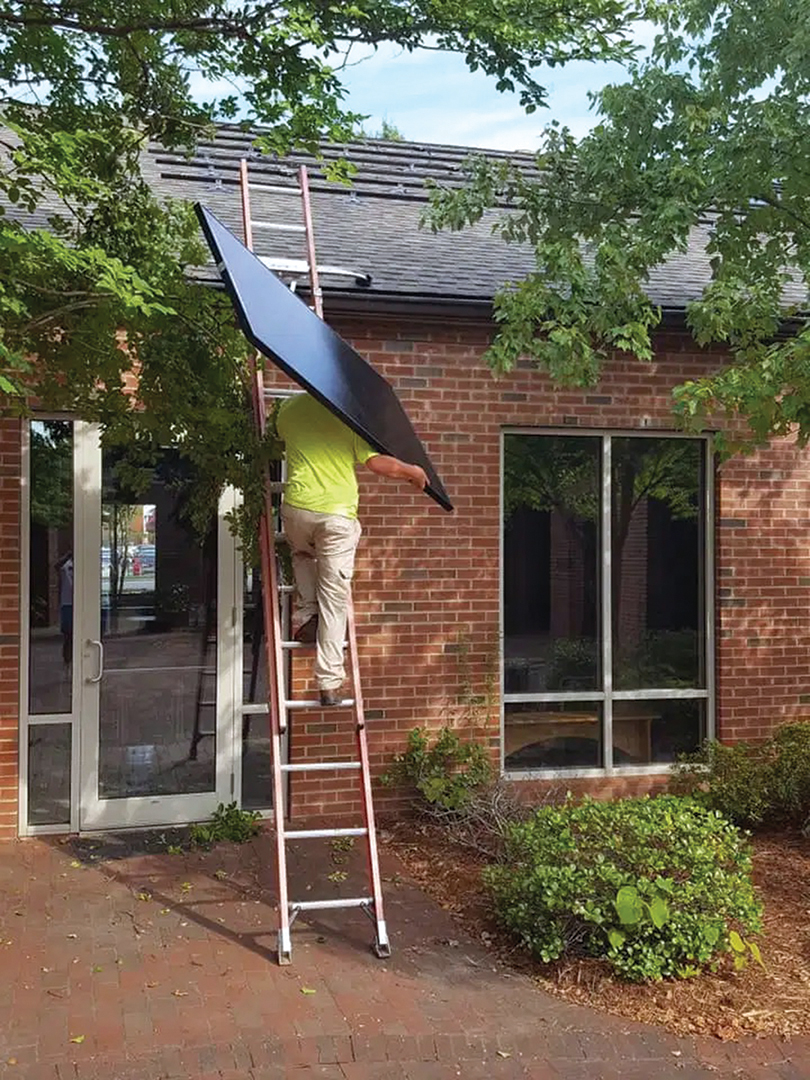 While the environmental and missional benefits of solar will always be significant, the North Carolina Solar Rebate Program through Duke Energy will expire at the end of 2022. The rebates, which came out of House Bill 589, offer residential, nonresidential and nonprofit customers the opportunity to apply for a rebate up to 90 days after a solar panel system has been installed. The rebate applies to both leased and owned systems, and nonprofits are eligible for a one-time rebate of up to $75,000. There are two application windows per year, one in January and one in July, and rebates are allocated by random selection among all entities that apply in each of the three categories. Solar panel installers can apply on behalf of their customers, making it even easier for churches to receive a rebate.

Sigel advises churches wishing to explore solar energy to get a free energy savings analysis from North Carolina Interfaith Power and Light (NCIPL). NCIPL will provide a detailed report with energy-saving recommendations ranging from simple to complex, and Sigel advises churches to begin with the low-hanging fruit while researching larger, more expensive projects like solar panels.

Once a church decides it is serious about the possibility of installing solar panels, NCIPL suggests getting a free solar suitability study from a reputable installer. From there, it’s a matter of figuring out the financial component of the project, which through leasing, rebates and grants can be surprisingly affordable, especially given the long-term cost savings.

Ultimately, the decisions to install solar panels is a missional one. As Inman put it, “How can our facilities be an asset rather than an albatross?

While self-contained battery storage systems for solar installations will one day be a viable solution for homes and businesses, the current system of privately owned or leased solar panels in North Carolina depends on net metering. With net metering, a building’s meter runs backward when a building is using less electricity than the solar panels are generating or forward when a building is using more electricity than the system is generating (e.g. at night or when the sun isn’t shining). The electricity that is generated is sold back to the local electric utility—Duke Energy or Duke Energy Progress in most of North Carolina—and the energy generated is reflected as a savings on the building’s electric bill.

GETTING STARTED WITH SOLAR ENERGY 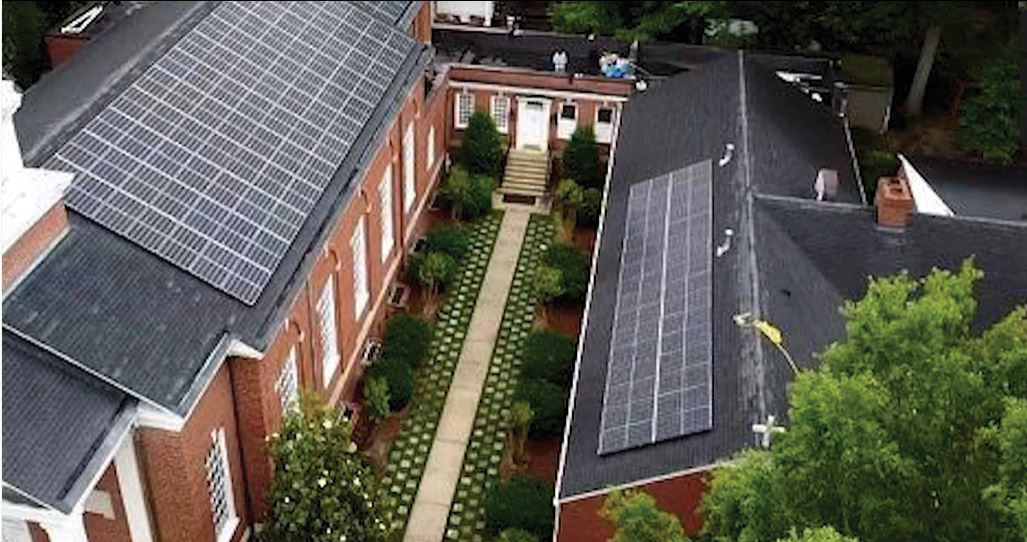