A reflection on the power of change

By Alice Freeman and the Rev. Phil Byrum

Change is inevitable. It can’t be stopped. Some fear it, some welcome it, but none can keep it from coming. So when it occurs, every one of us has a choice: pretend it’s not happening, or face it and see what it has to offer.

IN NEED OF NOURISHMENT

For more than a century, St. Mark’s, Wilson, was an anchor in religious, social and educational life for local African Americans. Chartered in 1887, the church has been through it all: economic ups and downs, black flight to the North, kids leaving to go to college, an aging population, the decline of church “cool,” and the dwindling of finances, leadership and priests.

But in its heyday, back in the 1940s and 50s, St. Mark’s had a full-time priest, a choir with a real organist, a certified lay reader and a robust congregation that actually included children and Sunday school.

Like any living organism, a church has to be fed. It has to be nourished if it is to be sustained. For many reasons, including that lovely frame of mind when times are good that things will never change, we did not do a very good job of nourishing our church over the years. We attracted no new people, relied on jaded ideas, and basked in the glory days — days when our Thanksgiving dinners with collards and cornbread stuffing were known throughout the community, and everyone looked forward to the annual concert by the St. Augustine’s Choir.

Suddenly — or at least it seemed sudden — we looked around and found there was no one in the congregation under 50 years of age, there were no children and our deacon-in-charge had passed away.

In 1991, the Rev. Philip Byrum, known affectionately to all as Fr. Phil, became the new rector at St. Timothy’s, Wilson. St. Mark’s had enjoyed a long-standing relationship with St. Timothy’s; when we transitioned priests, the rector of St. Timothy’s provided Eucharist once a month. We did morning prayer led by a lay reader on other Sundays.

When we lost our deacon and celebrant, Fr. Phil was a godsend. He continued the tradition of our churches’ relationship, and we were able to have Eucharist. But it didn’t solve the underlying problem: We were still not growing.

We were very proud that we did not require financial assistance from the Diocese, despite the small size of our congregation. This perhaps may have given us some false sense of security and a certain amount of complacency.

At the same time, more and more Latinos moved into the Wilson area, and they didn’t find the Roman Catholic church initially very welcoming. Fr. Phil, seeing the need of our new neighbors, established a Spanish-language congregation at St. Timothy’s, called La Guadalupana. From that point, Fr. Phil found himself conducting four services on Sundays: 8:00a.m. and 10:30a.m. at St. Timothy’s, 11:45a.m. at St. Mark’s and 1:30p.m. at La Guadalupana.

After several years, having served as a priest for more than 30 years, Fr. Phil recognized it was time to retire from such a hectic schedule.

THE FORK IN THE ROAD 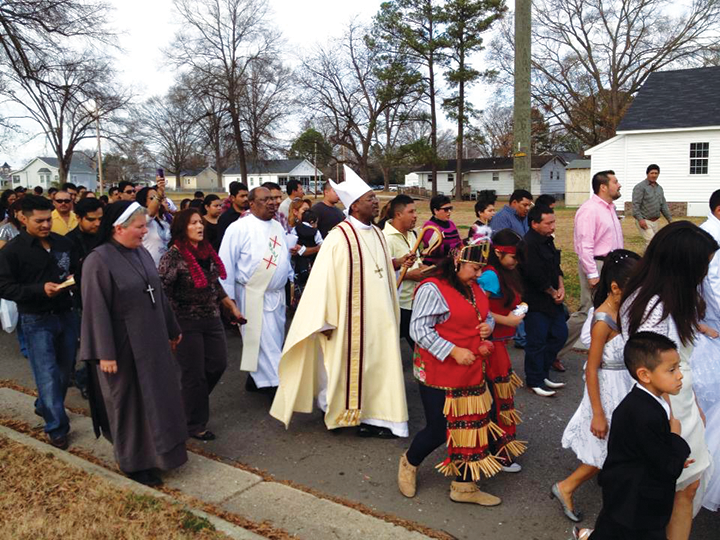 “[Change] is seldom sought out, but rather endured,” says Fr. Phil. “It is to be found in manifold dimensions of our lives. No part seems to be spared, however much we may try to avoid it, or by whatever name we may call it. Change happens. It comes in happy times, and yes, in moments difficult and unwelcomed.”

When change comes, it is that proverbial fork in the road where you must ponder which direction to take. As a congregation, we had come to realize we were probably dying, but we did not know how to reverse the tide. What we did know is that we were — and are — a congregation of faith. “‘For I know the plans I have for you,’ declares the LORD, ‘plans to prosper you and not to harm you, plans to give you hope and a future.’” (Jeremiah 29:11)

In its 130-year history, St. Mark’s has earned its reputation for reaching out to the community. Even in the most robust of times, its congregation was never large in terms of numbers, but that didn’t stop St. Mark’s from touching countless lives. One of the first schools for black children in the area was established in the then one-room church. A respected kindergarten program was established years later. Times changed, and needs changed, but no matter what shape or direction they took, St. Mark’s rose to meet the challenge.
That tradition was about to be continued. As we examined our options at our fork in the road, we saw a need to fill our church with new life. We saw neighbors in need of a new church home.

So we extended an invitation: “Come share our church with us.”

A FAMILY OF FAITH

In 2000, following a Spanish-language Festival Eucharist on Easter Day, 200 worshippers, led by Wilson Mayor C. Bruce Rose, followed a processional cross and banners from St. Timothy’s to St. Mark’s. Spanish Easter hymns and guitars rang out. After almost four years at St. Timothy’s, the people of La Guadalupana were relocating to their new church home. Awaiting the processing Latinos at St. Mark’s were members of the congregation — mostly female, several whom were in their nineties. A new day was beginning.

The congregations continue to share the church. We celebrate bilingual services in English and Spanish on special occasions, and they are always well-received. Someday we may even see a day when our worshipping congregations will not be separated by language.

“I am often asked how the members of St. Mark’s and La Guadalupana get along as they work and live together,” said Fr. Phil. “Like any family, there are moments presenting challenges. But as a family of faith, we are people of God who work it out and move on together. It is a joy to know and love the congregation of La Guadalupana and share in the life that God calls us to live.”

St. Mark’s has had to overcome a lot in more than a century, including three major fires, yet like the phoenix, we rise and survive. This time, St. Mark’s is not just surviving, we’re once again beginning to thrive.

Since we welcomed La Guadalupana, the financial burden of trying to go it alone is lifted. The two congregations, working together, received a $30,000 grant from the Episcopal Church Women to assist in building a parish hall, called St. Mark’s House/La Casa de San Marcos. With our own parishioners and the assistance of volunteers who attend St. Timothy’s, we have a very successful after-school tutoring program. And we are most proud that a young fellow who once received tutoring in the early days is not only now a junior in high school and recently inducted into the National Honor Society, but also comes back to tutor other kids. In addition, St. Mark’s sponsors a summer program for kids and a food distribution program, and we gladly open our doors to the community for such programs as Alcoholics Anonymous.

I don’t know where St. Mark’s would be today had we not made that decision years ago to make a change. As Fr. Phil says, change can be difficult and unwelcomed, but it is not to be feared. Because it’s going to happen, and so instead of focusing on what might be lost, look ahead to what gifts it might bring.

Alice Freeman is a parishioner at St. Mark’s, Wilson. The Rev. Phil Byrum is the vicar of St. Mark’s and La Guadalupana, Wilson.