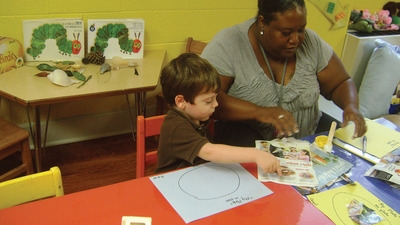 Imagine a world where children interacted with no bias toward race or cultural differences, talking to each other in not one, but two languages. Think about the possibilities if children had the chance to learn and grow together without the barriers that create cultural and socioeconomic divides, because they were taught instead to celebrate their differences and see the beauty in diversity.

Holy Comforter, Burlington, did those things in 2013 when it began the work of discerning whether opening a bilingual preschool would help to overcome some of the challenges local children were facing.

Though they didn’t know it at the time, the process actually started in 2011, when Holy Comforter entered into a partnership with Harvey R. Newlin Elementary School, a Title I school located only a mile or two from the church’s campus and comprised largely of African-American and Latino students.

The Rev. Adam Shoemaker, rector of Holy Comforter, describes Newlin principal Larry Conte as a “short, Italian Bishop Curry,” and the “best partner you could ever hope to have.” A passionate advocate for his kids, Shoemaker said “to hear him talk about Newlin sounds a lot like Bishop Curry’s Galilee vision.” Conte wants to do what’s going to work, he’s willing to ask for help, and he responded when Holy Comforter raised their collective hands to offer assistance.

Holy Comforter’s partnership with Newlin began as an Augustine Literacy Project site. The church sent tutors to the school, but, as was suspected from the start, partnering with a school like Newlin opened doors to new avenues of ministry as the relationship grew. Four years later, the partnership now includes a backpack program, a reading-buddies program, a Newlin summer camp, an annual welcome back brunch for Newlin faculty and staff, and an annual Newlin Day at Holy Comforter, where students and families join parishioners in worship.

In the midst of working with the school, leaders and volunteers came to realize there were not many teachers at Newlin - or in any of the local public schools - who spoke Spanish, even though the Spanish-speaking population is growing rapidly in Alamance county. It was also discovered that an increasing number of kindergartners were arriving at Newlin with linguistic deficiencies and not really prepared to start elementary school.

“In addition to the challenges faced by Spanish-speaking families, we were also finding families [of other cultures] who were not accustomed to enrolling their kids in a preschool setting,” explained Shoemaker. “The result is not enough kids starting Newlin with the classroom experience that other kids traditionally have.” 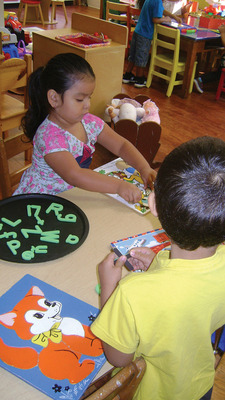 Holy Comforter has a history of starting schools. They do it about once every 30 or 40 years. There is ample classroom space, and in 2013 the underutilized space sat vacant during the week. Infrastructures were in place, so that year Shoemaker convened a committee of parishioners and community partners to begin discussing the possibility of starting a bilingual, multicultural school that would be unlike any other in Alamance county. Other churches operated preschools, but most of them served a homogenous population, namely white, upper-middle class kids.

The vision of a multicultural school meant being open to all, and so began two painstaking years of groundwork: lots of committee work, feasibility studies and relationship  building with community partners took place before the decision was made to make the vision a reality.

Holy Comforter found support in several institutions. Centro La Comunidad came on board; as a branch of Catholic Charities, they are also a Latino advocacy organization. Alamance Partnership for Children provided vital information and counsel in the planning process. Elon University also lent considerable support. University  president Leo Lambert has a track record of supporting efforts to widen access to education and as a result, Elon utilized its classes for projects that used the prospective preschool as the basis to do research for and provide recommendations to Holy Comforter.

The school’s logo was even designed by an Elon student. Its artwork features children and train tracks, representing the gap the school is endeavoring to bridge.

“I cannot overstate the collaborative and collective effort it took to make this school happen,” said Shoemaker. “Without everyone’s efforts and contributions, it may never have happened.” 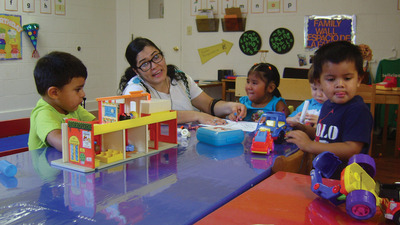 The doors opened in August 2015. Within a month, the school was two students shy of being 100 percent enrolled. Two classes are offered: the “younger” classroom of older 2- and 3-year olds meet on Tuesdays and Thursdays and has a waiting list for open spaces, and the “older” classroom of older 3- and 4-year olds meet Monday, Wednesday and Friday. Among the 22 students can be found African-American, Caucasian, Latino, Indian, Arab and Sudanese children. All classes are taught in both Spanish and English by Eva Green-Baysmore, the school’s director and lead
teacher, and Maribel Flores de Hoppert, the school’s trilingual assistant teacher.

“Because we’ve been so intentional about being diverse, multicultural and multilingual,” said Shoemaker, “the communities of color that are sometimes hidden in the background in Alamance county are hearing about the school and seeing us as a true place of welcome for their children.

“It is such a joy to see these kids together, speaking different languages, learning and growing together.”


WORKING TOWARD THE FUTURE

Among the many pieces that came together to open the doors was a $50,000 grant from Impact Alamance, a fund created as a result of the merger of Alamance Regional Medical Center and Cone Health. The fund exists primarily to assist organizations helping children in Alamance county.

The grant helped with the costs of renovating the classrooms and planned playground upgrades, but its most notable use has been the scholarship assistance Holy Comforter is committed to providing to families who may not have the means to afford even the minimal cost to attend the school. Additional funds have also been donated toward the scholarships, as the ultimate goal is to create an endowment that will support the scholarship fund long-term.

When asked about the keys to the school’s success, Shoemaker attributed it to two things. “One thing that really helped us was staying flexible and adaptable. When you start a project like this, there is some risk involved in even trying. We started slow and set our sights small in terms of what we were hoping to accomplish, but we stayed flexible. We listened to what others had to say.

“And we built relationships; we utilized and leveraged
every relationship we had in our community. We had a mix of parishioners and non-parishioners on our planning committee. Our current committee chair is not a parishioner – she’s a member of the local Catholic church. But she’s a Latina woman who has deep ties to this and had started a school at an Episcopal church before. Our approach is how we’re embodying the Galilee vision – we’re reaching out to folks and offering them a leadership seat at our table to help us discern what it is we need to do. That relationship building has been absolutely critical. We wouldn’t be where we are today without them.”