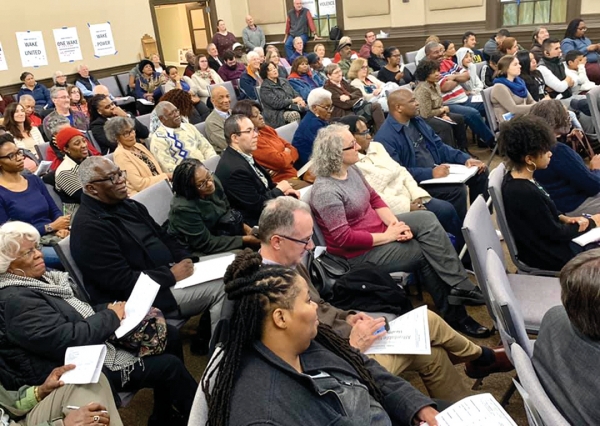 ONE Wake looks to transform the community


The Rev. Jemonde Taylor has thought, taught and preached a lot about community organizing during the last few years.

“What I tell people at Saint Ambrose is, collectively, 12.5 million children in Wake County go hungry every year,” he said. “There is no way we can deliver enough backpacks with goodies or enough lunches or enough dinners to feed 12.5 million children. However, what we can do is band with other churches, nonprofits, people of good will and work with government and corporations to create a system in which no one goes hungry.”

Taylor is the rector at Saint Ambrose, a historically Black parish in Southeast Raleigh known for its community engagement. As a founding member organization of ONE (Organized Neighbors for Empowerment) Wake—which grew from a series of meetings hosted by the church—on October 13, 2020, Saint Ambrose joined with Church of the Good Shepherd, Raleigh; St. John’s, Wake Forest; St. Mark’s, Raleigh; St. Paul’s, Cary; Trinity, Fuquay-Varina; and 36 other congregations, associations and nonprofits at the founding assembly of the community organizing collective. ONE Wake is a non-partisan, multi-ethnic, multi-issue affiliate of the Industrial Areas Foundation (IAF). ONE Wake is people-focused, “developing their innate skills and ability to work with each other to identify common problems, to find or create workable solutions, and to work together to implement systemic changes within society to achieve the common good,” as the organization’s website explains.

[Image: Attendees at listening sessions are all ears. Photo courtesy of ONE Wake]

IAF is the largest and oldest network of local faith and community-based organizations in the United States. Based on principles of community organizing, IAF affiliates help congregations, community groups and nonprofits join together to recognize their shared power, identify priority issues through extensive listening sessions and form partnerships with local government and business leaders to affect change.

“One of the principles of IAF is that our partners are ever-evolving,” Taylor explained. “It is a power organization based on relational power, meaning that power comes through relationships. We believe that power comes in two forms: organized people and organized money, and since we are about building relationships, we take it seriously…. We want to partner with any organization; we don’t want to work around [any entity in the community].” 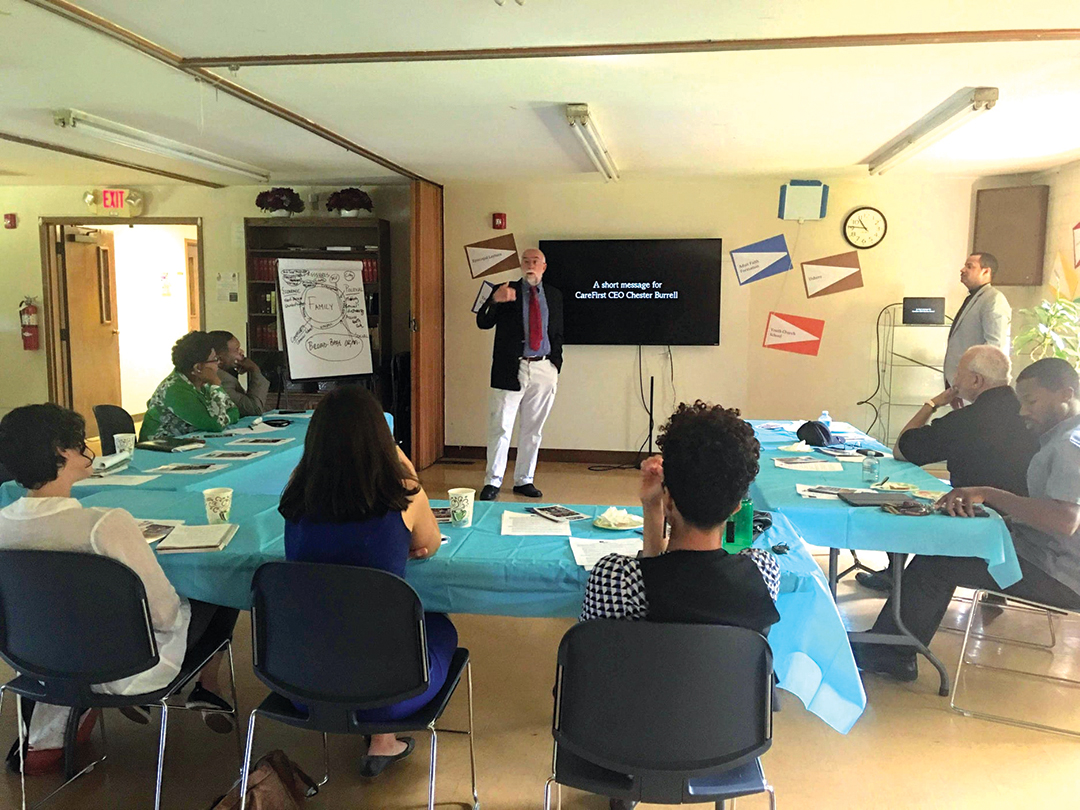 Fittingly, ONE Wake started out with a relationship between two diocesan clergy from different convocations. In 2015, the regional IAF organizer for Philadelphia and Baltimore and the local Durham organizer asked the Rev. Jonah Kendall, then rector of St. Philip’s, Durham, a member organization of Durham CAN (Congregations, Associations and Neighborhoods), to recommend a Raleigh-based clergy person who might be interested in starting an IAF affiliate in Wake County. Kendall gave them Taylor’s contact information. Taylor, who already recognized the power of the IAF model from his work with community members to transform the South Bronx through the Nehemiah project while a seminary student, was eager to get started.

The first step toward realizing the dream of an IAF affiliate in Wake County was reaching out to other clergy. (From the organization’s founding by Saul Alinsky, IAF affiliates have been heavy on representation from ethnically and religiously diverse communities.) Throughout the next year, Taylor began inviting small groups of three or four local clergy from a variety of denominations to meet at Saint Ambrose and imagine what community organizing in Wake County might look like.

The Rev. Javier Almendárez-Bautista, associate rector at St. Paul’s, Cary, became involved with ONE Wake in 2016, in part because he had worked with Durham CAN during his time at St. Philip’s. (Both Taylor and Almendárez-Bautista currently serve on ONE Wake’s steering team, a temporary, transitional team serving until the election of ONE Wake’s strategy team in fall 2021.)

“It started with me and George [Adamik, St. Paul’s rector] showing up,” he said. The act of showing up is the fundamental step in becoming involved in any IAF affiliate because the IAF model is relational. “It’s the power of presence. You don’t have to come in with an idea of what you want to do; you just have to keep showing up and listening to what you want to do together.”

Those clergy meetings eventually grew into slightly larger, more official conversations about forming an IAF affiliate under the banner Wake County Sponsors. During the next several years, thousands of conversations—from one-on-one chats over coffee to sanctuary-packing gatherings at local congregations—took place. The question was always fundamentally the same: What issues are important to people in Wake County? While answers varied, three trends emerged: affordable housing, education and workforce development.

As Almendárez-Bautista described it, “At the end of every one of the clergy meetings, people would say, ‘If you think this is worth your time, if you think exploring ways to act before the bills are late and the rent is past due is something that you’re interested in’—which for a lot of clergy what I sensed at the beginning, four or five year ago, was that sense of exhaustion, of having a lot of people call with needs that were just too big for us to handle out of discretionary funds—‘if you think this is worth your time, invite another clergy person to come to this meeting.’” Organizers made the same ask during listening sessions attended by dozens or hundreds of lay and ordained people: If the issues we are naming matter to you, bring someone to the next meeting. Keep showing up, and trust that the process will build something larger than what you can achieve alone.

“The goal is always to have a big tent—as big as possible—both because I think there’s a really great potential for truly democratic politics but also because that’s how you win,” Almendárez-Bautista explained. 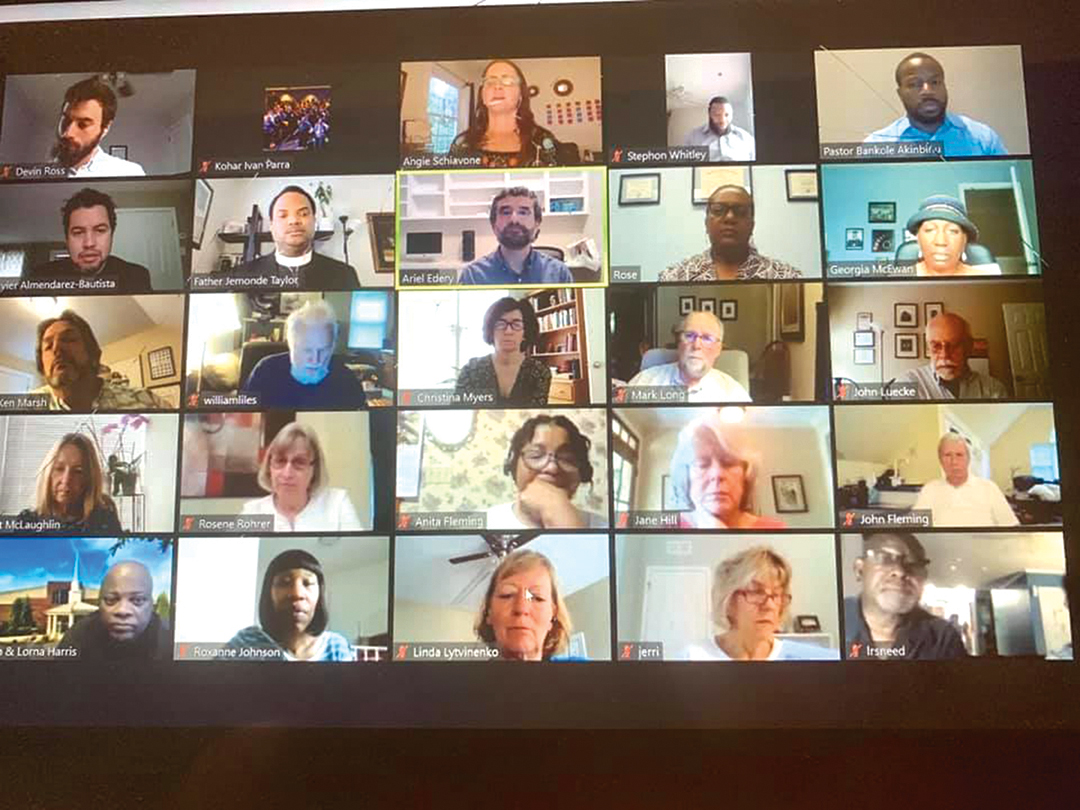 In October 2020, ONE Wake officially launched with its founding assembly. The organization is the first IAF affiliate to launch virtually; instead of the usual in-person gathering of three or four thousand supporters in an auditorium, ONE Wake gathered 3,000 supporters on Zoom. One official, when he heard ONE Wake’s goal for its virtual launch, said, “I’ll believe it when I see it.”

And see it he did. Attendees at the founding assembly included the mayor of Raleigh, the state’s attorney general, county commissioners, Raleigh city council members and developer John Kane, whose 150-acre, $2.2 billion Downtown South project is poised to reshape the community near Saint Ambrose.

Kane Realty Corporation isn’t the only influential business with which ONE Wake is in conversation. Apple, which recently announced a 3,000-employee Research Triangle Park campus, is a prime example of a corporation with which ONE Wake would like to partner; the organization’s June 10 “Issue Platform and Power Strategy” document highlights the impact the tech giant’s $1 billion dollar investment will have on Wake County. ONE Wake, Taylor explains, would like to work with Apple to make sure some of the company’s power and capital goes toward supporting local affordable housing, like the $2.5 billion Apple pledged to fight California’s housing crisis in November 2019.

“People can be our own worst enemies,” Taylor said. “We know we have power, and we don’t exercise that power.” For most people, “power” has a negative connotation, but, as Taylor points out, the simplest definition of power is having the ability to do or the ability to act. Relational power is positive power—not adversarial, not egotistical, not oppressive—leveraged to lift the entire community.

“The way I like to describe it in the Christian context is in the context of the resurrection and ascension of Jesus Christ,” he explained. “In Luke 24:48-49, Jesus has his disciples and is getting ready to ascend into heaven, and he says, ‘Once I go you will be clothed with power from on high. After I send the gift of the Holy Spirit, you will be clothed with power from on high….’ I view IAF and community organizing as living into the resurrection power of Jesus Christ. One of the tragedies, I think, of Christianity is that most Christians view the resurrection as an event that happened once with Jesus Christ and will happen again when Christ comes the second time, and they do not see the resurrection every day. Community organizing helps bring about a resurrected reality.”

What does that resurrected reality look like? Taylor says it looks like building strong relationships among member organizations in ONE Wake, government officials, corporations and business leaders and, ultimately, creating a community in which people’s quality of life is raised through meaningful employment that pays enough for people to eat healthy food, live in safe housing and secure good educations for their children.

One of the guiding principles of community organizing in the IAF model is local affiliates are organizations of organizations. In other words, individuals cannot become a member of an IAF affiliate (although they can attend meetings and trainings); only organizations can become dues-paying members. Member organizations pay annual dues equivalent to 1% of their operating budgets, with a floor of $2,500 and a ceiling of $15,000 to ensure larger, wealthier organizations do not wield more influence than smaller organizations. The organizational budget pays the salaries for a lead and part-time organizer, plus training and administrative and office expenses.

Images: ONE Wake’s model of community organizing is based on relationship-building and deep listening, whether in person or via Zoom. The original planning meeting took place at Saint Ambrose, Raleigh, on September 12, 2016. ONE Wake became the first IAF affiliate to hold its founding assembly online on October 13, 2020. Attendees at listening sessions are all ears, including the Rev. Jemonde Taylor (far right). Photos courtesy of the Rev. Jemonde Taylor and ONE Wake