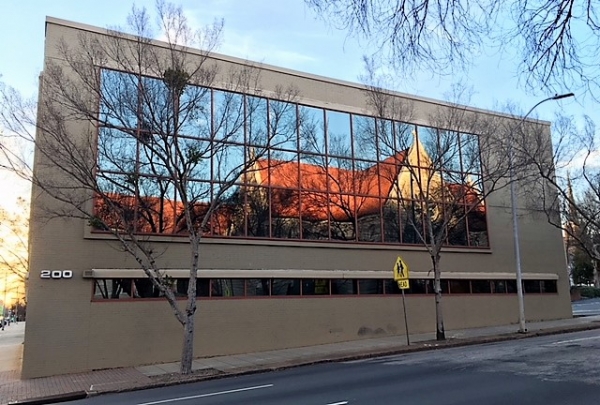 After more than three years of discernment, the Diocese of North Carolina announces the decision to list for sale the Diocesan House office building at 200 West Morgan Street. The sale is being overseen by Jones Lang LaSalle Incorporated (JLL), a professional services company specializing in real estate and investment management.

The decision is one that was reached with much deliberation, intention and prayer. Led by a task force that began its work in the summer of 2019 after the building’s longtime tenant vacated the first two floors, the team imagined a multitude of possibilities for the three-floor building, including renovating the existing building, redeveloping the site or selling it outright. Every possibility was measured by how it might allow the Diocese to further the work of our mission priorities and call to ministry.

Discernment naturally slowed at the start of the pandemic, but as time went on, two changes became evident. First was recognizing that diocesan staff could operate with a much smaller footprint. At the start of the pandemic, the staff transitioned easily to functioning as a remote workforce, in part because not all staff is based in Raleigh. Over the course of the last two years, the staff worked to refine its practices of remote teamwork while maintaining its ability to serve the congregations of the Diocese.

Second was the changing landscape of Raleigh itself. Commercial and residential development continues to grow and expand at a rapid rate, and with its lot in the heart of downtown Raleigh, Diocesan House’s site provides several possibilities for development.

“What we discovered during the pandemic is that despite not being in our usual offices, our productivity not only held to its usual levels but increased,” said the Rt. Rev. Sam Rodman, bishop of the Diocese of North Carolina. “For two years, we have demonstrated we could continue to serve our churches in every way without a central office. And that was a gift. It allowed us to release any doubts about letting go of our current building and instead get excited about looking forward to how reducing overhead costs of our administrative home may provide more resources for ministry.”

In May 2021, the Diocesan Building Task Force announced its intention to issue a Request for Proposal to begin the search for a consultant with whom to work on the next phase of discernment, gathering input from across the Diocese and neighbors in Raleigh, and helping to evaluate every option for what might be done with the property. Following that research phase and study, it was clear the best option for the Diocese is to sell the building to be able to fulfill its desire for both long-term stability and ability to do ministry.

The building was listed publicly on September 8. The Diocese will be active in the offer process to ensure future plans for the site will be amenable to our current neighbors as well as beneficial to the city. The hope is that the building will be sold and the Diocese settled in its new location in the first half of 2023.

Where that location will be has not yet been determined, though several options are being explored. The Diocese expects to remain in the Raleigh area and plans to occupy temporary office space while next steps are discerned. This is not the first time the Diocese has relocated its headquarters. It moved to its current downtown location in 2005; prior to that it occupied offices in the North Hills area of Raleigh.

“There will be a transparent and intentional process of discernment regarding the use of proceeds from the sale, once a new location has been determined," said Rodman. "This discernment will include Diocesan Council, the Standing Committee and the Trustees for the Diocese as well as other representative bodies. Wherever it’s located, Diocesan House will always be a place of welcome and a reflection of our commitment to our missional priorities. We are excited about the possibilities the sale of our building presents, and we look forward to welcoming one and all to our new home.”