Deacon Reflection: The Hands and Feet of God 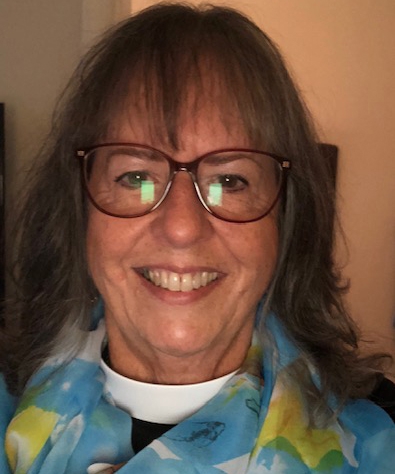 I believe God started tapping me on the shoulder when I was about 5 or 6 years old, when in the summers at the beach with my grandparents (all of us good Presbyterians!), we went to church every Sunday morning.The closest church was a chapel in Ridge, Maryland, which was a mission of Trinity Episcopal Church in St. Mary’s City, Maryland. There, in that little Episcopal chapel, my love of the Episcopal liturgy was born.

Life happened, I grew up, graduated from college in Bristol, Tennessee, which is where I discovered the little A-frame St. David’s in the Woods Episcopal mission church. In 1973, I was received into The Episcopal Church after returning to the Washington, D.C. area. It was there I began a long and rewarding airline, travel management career, and worked all over the world. I married Aden Riggin and we had two girls, who are grown and good citizens making their own contributions.

Aden had a long career with the airline industry. He retired and went on social security disability because of medical issues. It was then that he recognized the need for English as Second Language classes in a community with a growing Korean population and researched the best program to offer. He established this ministry at Good Shepherd Episcopal in Burke, Virginia. It was incredibly successful and continues to this day. We believe God then called us to a little A-frame church (full circle from my college days?!) in Annandale, Virginia: St. Barnabas’. It was there Aden offered to help establish an afterschool program, in cooperation with Fairfax County, for children in the church’s neighborhood who were at risk for gang recruitment. I contributed to the Journey to Adulthood program (little did I know then that program originated at St. Philip’s, Durham) by mentoring first-year students. We ended every Sunday with “God moments” from the previous week.

I believe God was working in and through both of us; in effect, we were both deacons together. We moved to Durham in 2007 and Aden died in 2008. Our home and life in Durham were his final gift to me. Thanks be to God, and to Aden.

Fast forward to about 2013 when I felt a strong need to go visit the son of a dear friend of mine who is serving a 35-year term in a Virginia state prison. We had the most wonderful visit. I stayed for five hours. As I was driving home, I experienced an urgent need “to do something.” I believe it was a visit from, or a rising up of, the Holy Spirit. I returned to Durham and had coffee the next morning with the Rev. Joe Hensley. The rest is history! That was the launch of prison ministry for me, and it was no accident. The journey has continued to encompass anti-racism and reconciliation, including mass incarceration and bail bond reform. The common theme for all of these ministries is racism and poverty.

Soon after coffee with Joe, at his suggestion, I began to discern with the rector, the vestry and my congregation about God’s call for us to establish Faith Teams - groups of parishioners who would enjoy a meal together and meet (in covenant and friendship) twice-monthly with an ex-offender returning to our community, supporting that person as they assimilated back into our community. Those teams are alive and well at St. Luke’s and many other churches in Durham to this day. St. Luke’s now has two teams!

I was visiting with my friend (the mother of the incarcerated son in Virginia), and over a glass of wine she quietly told me she thought I should become a deacon. Frankly, my initial thought was that she’d lost her mind. I did listen to all the reasons why, and clearly the seed planted by God early in my life had continued to grow. My formal discernment began in February of 2015.

For 3.5 years, I followed God’s call through preparation and study and prayer and interview, to be ordained to the diaconate. It was an incredibly enriching and a very difficult experience. I learned so much about the gift I was being given by God and about myself. It was scary and hard and “character building,” but I knew without any doubt this was what God wanted me to do. On May 5, 2018, the Rt. Rev. Sam Rodman laid his hands on my head and consecrated me. God had indeed made me a deacon. It was the happiest day of my life, and I knew I would never be the same.

God has taken me deep into the work of acknowledging and addressing racism. The launch of that work resulted from a two-day long training with the Racial Equity Institute (REI). Cathy Rimer-Surles “strongly encouraged” me to go to this training over what seemed like a very long time. I didn’t really understand a word she was saying (it is a new language), but I went to the training to find out why she was so impassioned (and to get her to stop encouraging me). I was stunned to learn that as a white person, with all the power, I was a racist (something I thought was impossible). I know what our forefathers did some 400 years ago wasn’t my fault, but I knew it would be my responsibility to use my white power to make change with people of color. I would learn to follow and support people of color – not fix it – but lend my power to help them make change. This training was life-changing for me. It has been six years since that first training – I’ve attended many more of those workshops and others, to learn as much as I could about this country’s painful past and its impact upon God’s children today. I knew in my heart I had to be part of making change.

Right after the REI training, Episcopalians United Against Racism (EUAR) was founded by five good Episcopalians (I was one) who needed to be able to continue the conversation in a faith-based environment. We have learned together and developed relationships with people and organizations established by people of color for people of color. Together, we applied for and were awarded a Jesse B. DuPont grant (over two years) which has supported Communities in Partnership (CIP) and others, with the result of improving the lives of people in Durham who have been so impacted by racism and the resulting poverty, over generations. A Summit on Racism and Child Poverty was held last year, led by people of color that provided the venue to tell their stories and a platform to talk about a better future. It was attended by more than 400 people. We continue to have monthly roundtable lunches with these same leaders. We are strong supporters of getting as many of our diocesan population to the REI workshops and we developed an eight (now 10) module mini-series to help congregations continue these tough, yet critical, conversations. There is hope.

How in the world could all of this be accomplished by so few? God is in the midst of all of this, paving the way for us to do God’s work – we are the hands and feet of God.

I didn’t think it was possible for my life to get any richer, but God continues to touch my heart in a very deep way. God is good!

By the Rev. Monnie Riggin