CAMINANDO WITH JESUS: Being Chosen is the Reason You Can 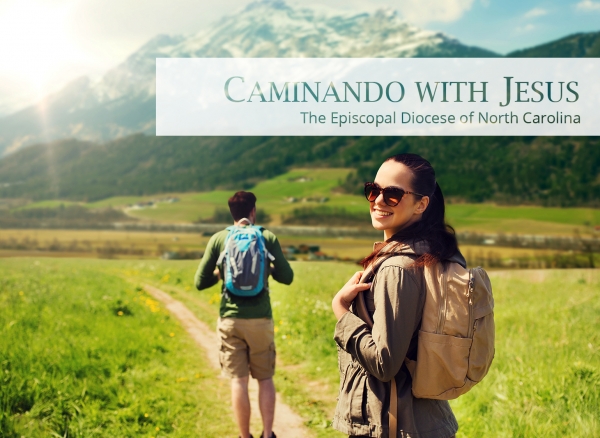 When the hour for the Passover meal came, Jesus took his place at the table, and the apostles with him. He said to them, "I have eagerly desired to eat this Passover with you before I suffer; for I tell you, I will not eat it until it is fulfilled in the kingdom of God." Then he took a cup, and after giving thanks he said, "Take this and divide it among yourselves; for I tell you that from now on I will not drink of the fruit of the vine until the kingdom of God comes." Then he took a loaf of bread, and when he had given thanks, he broke it and gave it to them, saying, "This is my body, which is given for you. Do this in remembrance of me." And he did the same with the cup after supper, saying, "This cup that is poured out for you is the new covenant in my blood. But see, the one who betrays me is with me, and his hand is on the table. For the Son of Man is going as it has been determined, but woe to that one by whom he is betrayed!" Then they began to ask one another, which one of them it could be who would do this.

"You are those who have stood by me in my trials; and I confer on you, just as my Father has conferred on me, a kingdom, so that you may eat and drink at my table in my kingdom, and you will sit on thrones judging the twelve tribes of Israel.

The Passion on Palm Sunday has all the markings of a great play. There is tension and subterfuge. The opening scene is a dinner party for what would appear to be the closest of friends. There is an undercurrent of a pending crisis and an understanding that the hour is coming when life as those gathered know it will never be the same again. We have Jesus Christ as the ultimate protagonist pitted against the lead antagonist, Judas Iscariot, “one of the twelve.” There are a number of other characters in this magnificent play who may initially appear to have minor roles but who, upon further reflection, reveal their importance as the audience moves quickly through Jesus’ triumphant arrival in Jerusalem to his awful crucifixion five days later.

Peter was one of the first humans recruited by Jesus to be a disciple. Simon Peter was a fisherman who was in a slump when Jesus identified him. He and his brother had been fishing all night when Jesus urged them to put down the nets and become fishers of people. That set them off on a fantastic journey studying with the Rabbi who taught them about love for themselves and one another. Jesus showed Peter how, as an apostle, he had the power to change people’s lives. He could heal the sick and nourish the hungry. He could offer people the gift of forgiveness and eternal salvation.

Peter stumbled quite a bit. At times, he seemed to understand the mission perfectly well, but then he would offer some insight that indicated that he required more instruction from Jesus. Peter seems to represent the best and worst in all of us. The more we study the word of "go"—and the deeper our relationship is formed with our savior—the more profound the hope is that we are more Christ-like in the world. Jesus, however, knew his students very well. He knew that Peter loved him, and he also knew that Peter would betray him. When Jesus tells the disciples that imprisonment is imminent, with a violent death to follow, dear Peter blurts out, “Lord I am ready to go with you to prison and to death!” If asked for a show of hands, hopefully most Christians would have that same response. Yet, at the crucial moment when Peter was given an opportunity to pledge his undying support for Jesus, he choked and denied being a follower. Just as Jesus said, “the cock will not crow this day until you have denied three times that you know me.” We can all point to a moment in life when we thought we would have courage to take a stand and fear stopped us in our tracks. Peter is not a bad person. Peter is a necessary villain in the passion. He reminds us that, as human beings, we all fall short of our call sometimes. It is also a reminder that Jesus never turns his back on his people, for Jesus never faltered in his love for Peter.

In order to have a conviction, there must be a presiding judge, and that is the role Pilate, Roman governor of Judea, is called to portray in this tragedy. Pilate is a hesitant presider who is looking for a way not to condemn the person who the public wants executed. Pilate knew Jesus was innocent of the accusations and should be liberated from the mayhem engulfing the community. At the same time, Jesus knew the time had come to bring about the prophecy as outlined in the scriptures. Despite the pleas from Pilate for Jesus to help save himself, he left Pilate to bring about the outcome that was predestined.

Following the conviction, Jesus was condemned to death and given a cross as he was paraded to the place where he would be hanged. On the way, a young man is recruited to carry the cross. His name was Simon of Cyrene. He was one of the seemingly minor characters who was given a herculean job.

Simon was a person of African descent. He was coming in from the countryside headed in the opposite direction of those marching towards Golgotha. Simon perhaps was headed towards a Passover feast and not looking for any trouble on the dusty road that day. Suddenly, out of nowhere, Roman soldiers approached him and commanded him to carry the cross to its final destination. Some shock must have set in. "Why me?" would seem a natural reaction to such a demand. Once compelled, Simon picked up that very heavy cross, the cross that has come to symbolize Christianity, and carried it as instructed.

Prolific poet Countee Cullen offered his spin on Simon and what his feelings must have been in a poem called “Simon the Cyrennian Speaks.” In his musings, Simon of Cyrene is questioning why he was given the assignment in the first place. He says,

At first I said, "I will not bear
His cross upon my back;
He only seeks to place it there
Because my skin is black."

In the end, Simon knew Jesus was on a mission and, for some reason, he had been called to be a part of that truly bleak assignment.

Instead of contesting, Simon picks us the cross with a sense of awe and wonder. He turns back in the direction from which he had just come and falls in with the crowd. Though we may not understand why, Simon is not an incidental participant. Simon is the connector who shows the world what it is to truly pick up the cross and to follow Jesus. Simon was not one of the original 12. He had not journeyed with Jesus through three years of ministry. Simon is not reported to ever have received a miracle from Jesus. With the little information we have, there is no indication that Simon had ever laid eyes on Jesus until that fateful day.

As contemporary disciples, you were not present for the ministry of Jesus in Ancient Israel and yet, on this Palm Sunday, you, too, are drawn into the Passion. You are active participants in this drama. That frenzied crowd was confused to the very end. Today, you are reminded of the decisions that you are called to make over and over. Will you pick up your cross and follow Jesus? Will you acknowledge your dependency on the Savior? Are you willing to invite others to carry the cross of Christ and to see that as an honor and not a burden?

As Holy week begins, we are reminded that this is a solemn time to deepen our resolve to follow Jesus, even unto death on a cross. We will sit this week with the understanding that Jesus was crucified to save humankind from sinful ways. Let us not rush through these days but rather surrender ourselves to renewing the bonds of love with Jesus Christ who was condemned by the world and loved us so much that he forgave our human failings as he was dying. May we never fail to acknowledge our Savior, and may we feel honor bound to pick up the cross when chosen.

The Rev. Kathy Walker is the missioner for Black ministries in the Diocese of North Carolina.