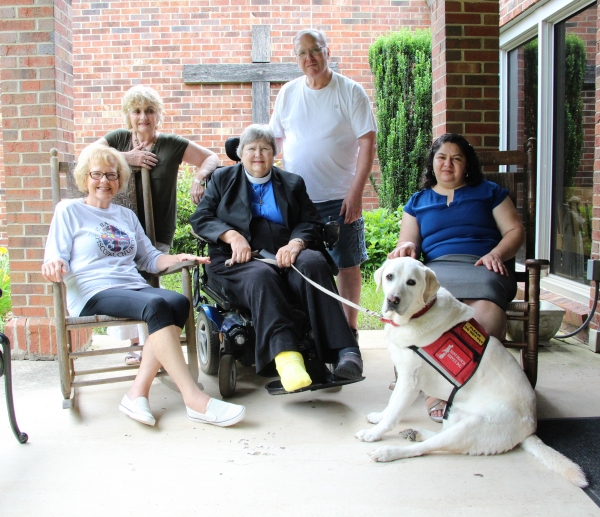 By now, Juana’s story is well-known to Episcopalians and immigration reform advocates in North Carolina.

A 24-year resident of Asheboro, Juana Luz Tobar Ortega had dutifully reported to Charlotte for her scheduled check-ins with Immigration and Customs Enforcement (ICE) without incident since 2011. In April 2017, however, she was informed she had until the end of the following month to departure voluntarily. Faced with the possibility of leaving behind her husband, four children and numerous grandchildren to return to a potentially life-threatening situation in her native Guatemala, on May 31, 2017, Ortega announced she had instead taken sanctuary inside of St. Barnabas, Greensboro. It was the first instance of an Episcopal church offering public sanctuary to an undocumented immigrant facing deportation.

Since that day one year ago, Ortega has not ventured further than the driveway at St. Barnabas. The monitors she wears on each ankle alert ICE to her every movement, and, while the agency has a policy of avoiding arrests in sensitive locations like churches, schools and hospitals, Ortega is not willing to risk stepping too close to the church’s property line. She keeps busy sewing and making crafts, and she is accompanied at all times by family, members of her Pentecostal church in Asheboro, or volunteers from St. Barnabas and the wider community. Recently, a volunteer taught Ortega to make pottery, and her early works demonstrate she has a talent for it.

Despite the best efforts of her family, friends and supporters—and her own positive attitude—Ortega describes her situation in one word: boring. Talk to her for a bit longer, and she shares her homesickness for the life she built in Asheboro and her anguish over seeing no way forward to reunite permanently with her family outside the walls of the church.

Life has changed radically for both Ortega and the people of St. Barnabas, who clearly cherish her. Ortega is never alone, and managing the logistics involved in scheduling volunteers to stay with her during one of four daily shifts is a time-consuming task for the church’s deacon, the Rev. Leslie Bland. In addition to staying with Ortega, members of the congregation also engage in advocacy on her behalf and raise funds to help defray the salary lost by Ortega’s family since she entered sanctuary. Sanctuary is an enormous undertaking, both logistically and emotionally, for everyone involved: the church, the family and, above all, the person in sanctuary.

Ortega entered the United States in 1994, seeking asylum as a victim of violence in Guatemala. Her petition was denied, but she was granted a work permit as she appealed her case, a process that took six years. During the appeals process, Ortega’s eldest daughter suffered a life-threatening illness. Unable to acquire the permission necessary to return to Guatemala in order to care for her, Ortega travelled to her native country in defiance of ICE. As a result, ICE revoked her work permit and ordered her to leave the United States. Still facing danger in her native country, after her daughter’s recovery Ortega returned to North Carolina and continued working at a High Point textile market as a sewing machine operator. In 2011, ICE took Ortega into custody, only to release her one week later.

Throughout her time in the United States, Ortega has spent tens of thousands of dollars fighting for her asylum claim. ICE accepted her attorney’s pleas for a stay of removal until her April 2017 check-in, at which time Ortega made the decision to enter sanctuary.

No one involved in Juana’s ongoing efforts to attain legal status disputes these facts or the ways in which Ortega did not comply with ICE’s orders. For Ortega and her supporters, the question is not one of legality but of determining what is ethical within an immigration system they regard as broken. They also note that entering the United States without permission to petition for asylum is not unusual. Petitions for asylum must be made from within the United States, so it is actually the means by which most asylum seekers arrive. Nonetheless, for Ortega, there is no clear path to leaving sanctuary a free woman.

Everyone who has interacted with Ortega during her time in sanctuary tells the same story: Juana is a delight who cooks delicious food for everyone who visits her, treating them as guests in her home. Our time together proceeded less like an interview than a conversation around a bilingual family dinner table. Ortega’s husband, Carlos, stopped by before he began to mow the church’s lawn, one of the many ways he and Ortega help out around the church. One of her granddaughters helped to translate for awhile before heading off to play. A conversation about the hundreds of rice, bean and meat pupusas Ortega was planning to make for her church in Asheboro led to jokes from the volunteers about St. Barnabas visiting the congregation to steal some food, the superiority of Guatemalan tamales to Mexican tamales, and the rector’s request that Ortega leave the vegetables out of the smoothies she makes for him.

It is clear from the way the volunteers who have spent time with Ortega talk about her that she is a valued member of the community. It is also clear how much they admire her fortitude.

“Juana says she’s bored, but you would never know it. Every day she wakes up with a smile,” Myers says. “I guess the word boredom never occurred to me. I know she is [bored], but she never lets on. She’s an example of happiness and faith and kindness.”

Merriman agrees. “Juana is not a person to let the grass grow under her feet. There’s always some project in process. I would be under my bed just saying, ‘Oh, go away.’ It’s impressive.”

Keeney also attests to Oretga’s faithfulness, explaining that every morning after she wakes up and greets whoever is staying with her, Ortega goes back into her room to pray. She and her family are also regular attendees at St. Barnabas’ Sunday services, during which Ortega reads Scripture and sings.

“I’m very happy she’s praying for us,” Keeney says. Another volunteer with whom Ortega is particularly close, Neustel, talks regularly with her about the Bible and their common faith. Neustel stays with Ortega twice per week and is invaluable in documenting her journey through photography and helping translate.

While most days are the same for Ortega, holidays stand out. When her daughter mentioned she wished her mom could get a haircut for her birthday, Merriman asked a stylist friend to come to the church to do Ortega’s hair. A cosmetologist friend offered to give her a manicure. Another parishioner knows the manager at a local New York and Company, who arranged to deliver a rack of clothes for Ortega to try at the church.

“Carlos was like, ‘Who is this?’” Ortega jokes about the moment her husband saw her with her new look.

It’s a joyful memory for the people gathered around the table, eliciting peals of laughter, but Ortega’s unorthodox birthday party is also a stark reminder these regular personal care tasks become much more difficult for someone who cannot leave her home.

The mood around the table darkens when the conversation turns to the question of Ortega’s ongoing attempts to attain some type of legal status and leave sanctuary.

That’s Ortega’s answer when asked what has changed about her situation: Nothing. Members of St. Barnabas’ vestry wrote letters to North Carolina’s two senators, Thom Tillis and Richard Burr, Representative Ted Budd of the 13th district, which includes Asheboro, and United States senators from each state in which someone was at the time living in sanctuary—a total 28 senators in 14 states.

“We got zero response. Zero. Not a phone call, nothing,” outside of a form immigration letter from one senator, Keeney explains. “The frustrating part is a lot of these are senators who you would think would care: Elizabeth Warren, Corey Booker, Chuck Schumer.”  Warren, Booker and Schumer have all spoken in favor of immigration reform, various protections for asylum seekers, temporary protected status (TPS) and recipients the deferred action for childhood arrivals (DACA) in the past.

The frustration in the room is palpable while we discuss the lack of progress. Neustel steps out of the room for a moment to retrieve a box of tissues for Ortega, who has begun to weep.

“What I would like to say is that I am not a criminal. For the government—for the laws of the new government—to treat us like this, we have not done bad things, with the police or anything like that. The only problem is that we don’t have papers. And the only thing we want is to be allowed to live quietly with our families,” Ortega says through a translator.

Summerlee Walter is the communications coordinator for the Episcopal Diocese of North Carolina.