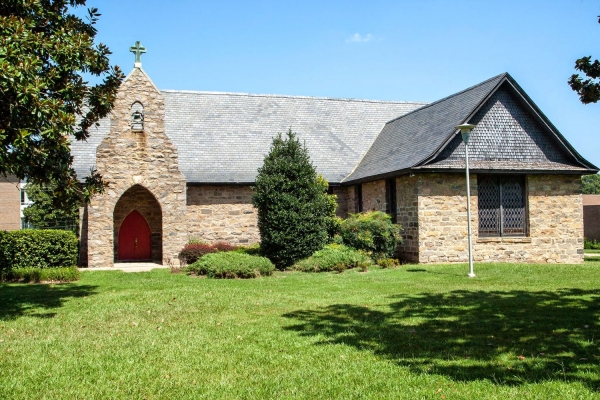 Saint Augustine’s University (SAU) was awarded $500,000 from the Historically Black Colleges and Universities grant program, funded by the Historic Preservation Fund and administered by the National Park Service (NPS) Department of Interior to preserve the Historic Chapel.

The funding is part of the $9.7 million in grants announced by the National Park Service to assist 21 preservation projects for historic structures on Historically Black Colleges and Universities (HBCUs) campuses in nine states.

“For more than 180 years, Historically Black Colleges and Universities have provided high-level academics, opportunities, and community for generations of students,” said NPS Director Chuck Sams in a statement. “These grants enable HBCUs to preserve the noteworthy structures that honor the past and tell the ongoing story of these historic institutions.”

The chapel was built on the campus in 1895 by The Episcopal Church. It is one of the oldest buildings on the campus of SAU and is a Raleigh Historic Landmark. Alumnus the Rt. Rev. Henry Beard Delany, the first African American elected bishop of the Episcopal Church in the United States, was also a teacher of carpentry and masonry at Saint Augustine’s. Delany’s carpentry and masonry students were required to construct the chapel. The students quarried the stones used to build the chapel from the campus. On Tuesday, October 11, 1897, the bishop of the Episcopal Diocese of North Carolina, the Rt. Rev. J.B. Cheshire, consecrated the chapel. The chapel is on the National Register of Historic Places.

“The Saint Augustine’s Historic Chapel is the physical and spiritual cornerstone of our beloved institution,” says SAU President Dr. Christine Johnson McPhail. “The preservation of the chapel is essential to our strategic goals of student success and university sustainability.”

In 2018, SAU was one of 18 HBCUs receiving grants totaling $8.6 million. The $312,000 received at that time allowed SAU to complete the first two phases in 2020, which included preserving the chapel’s original stained-glass windows and its antique, handmade cherrywood pews. This year’s grant will fund Phase III, replacing the chapel’s roof and rehabilitating its restroom to allow for handicap accessibility.

“For Alumni, students, and community members, Saint Augustine’s Chapel is a spiritual and cultural resource,” said the Rev. Hershey Mallette Stephens, ean of the chapel and spiritual life. “The award from NPS allows us at this moment to continue the preservation work of this beautiful sacred space and ensure that it holds the prayers, praises, and hopes of students, faculty, staff, and the Falcon family for many years to come.”

Founded in 1867 by the Episcopal Diocese of North Carolina, the mission of Saint Augustine’s University is to sustain a learning community in which students can prepare academically, socially, and spiritually for leadership in a complex, diverse, and rapidly changing world.