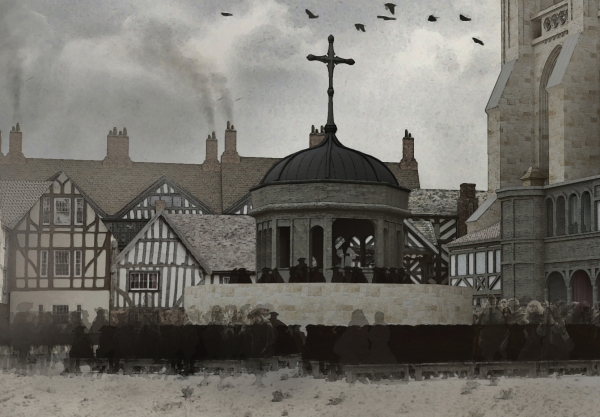 How a multiyear visual and auditory mapping project allows modern people to experience worship in St. Paul’s Cathedral before the great fire of London

In 1973, the Rev. Dr. John Wall wrote his dissertation on The Book of Homilies, a 1547 volume published under the supervision of Archbishop of Canterbury Thomas Cranmer that outlined the doctrine of the Reformation Church of England.

[Image: A rendering of St. Paul’s Cross, the northeast corner of the St. Paul’s Cathedral churchyard, from the perspective of someone standing 25’ away from the preacher. Photos throughout courtesy of the Rev. John Wall]

“When Thomas Cranmer really had the chance to carry out an extended program of reform, he chose to reform worship,” Wall, now a professor of English literature at NC State University, explained. The implications of this reform were enormous. The common, illiterate population was finally able to understand the Word of God when it was read in church after the Great Bible became the first authorized English translation of Scripture. Equally as important was The Book of Homilies; because parish priests could preach only with a license from their bishop, most worshipers heard weekly sermons from The Book of Homilies, the authorized text for unlicensed priests. These reforms, along with the first edition of the Book of Common Prayer introduced in 1549, created a culture of accessible, participatory worship that profoundly changed Christianity in England.

“It was really important to me, way back then, for people to recognize that public, corporate worship was at the heart of what the English Reformers were about and where the differences between the Medieval Church and the Reformed Church were most obvious and had the most impact on people,” Wall said.

At the time of this major shift in the life of the Church, St. Paul’s Cathedral was the most important church in London and, by virtue of London’s importance in English culture, therefore one of the most important churches in the Church of England. Built starting around 1200 and finished around 1400, the original St. Paul’s was destroyed by the Great Fire of London in 1666. Due to the building’s importance, however, a trove of illustrated engravings and Christopher Wren’s architectural drawings remained. 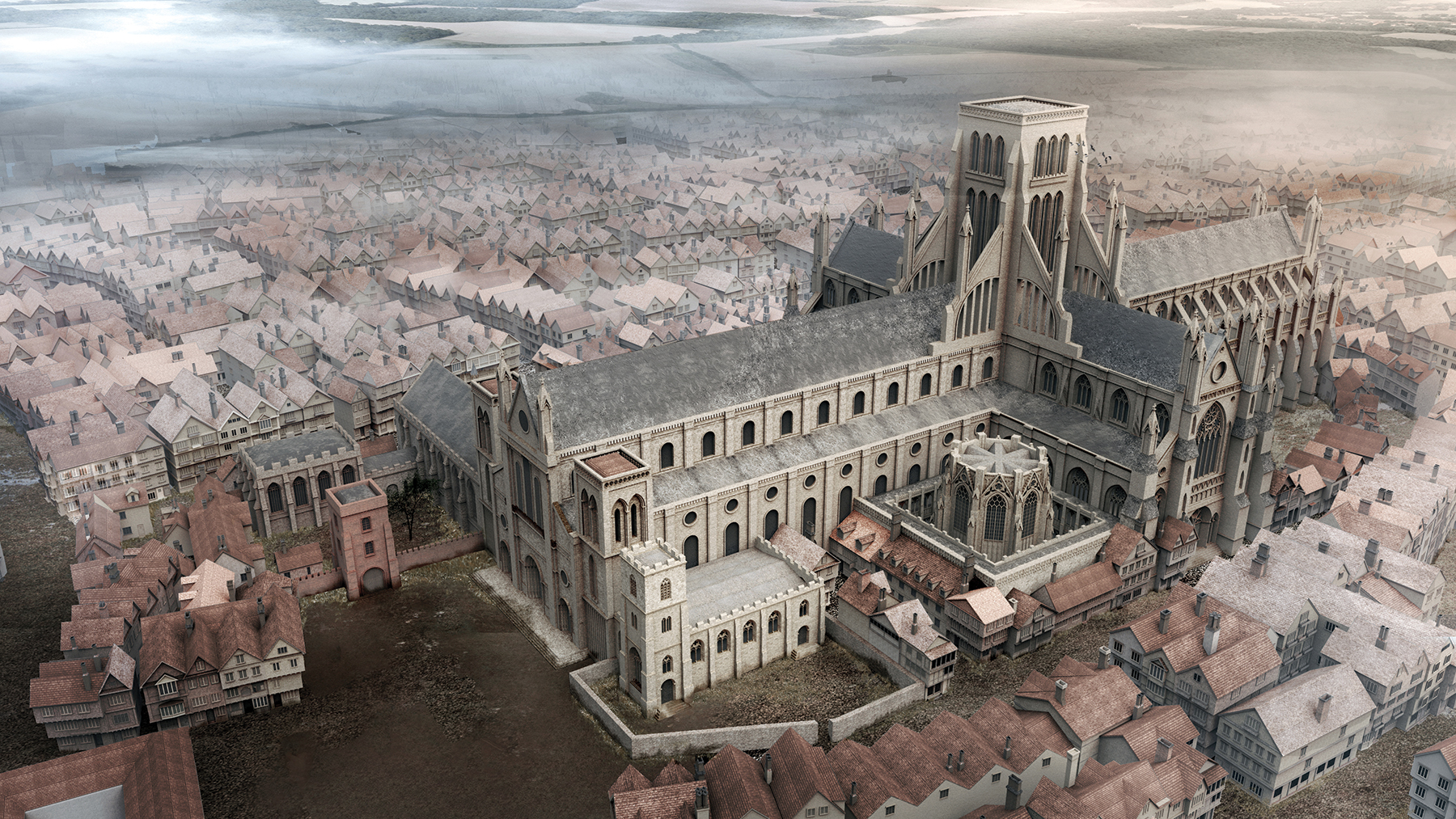 [Image: An aerial view of the original St. Paul’s Cathedral in London, created from extant architectural drawings with the help of a CAD architectural program.]

About 20 years ago, Wall learned about the CAD (computer-assisted drawing) programs modern architects use to design buildings and thought, if the software can be used to design buildings that do not yet exist, why couldn’t it be used to create a building that no longer exists instead? Around 2010, in consultation with David Hill, then a junior faculty member and now head of the architecture program at the NC State College of Design, Wall pursued a digital humanities grant from the National Endowment for the Humanities. His initial application for funding to map the entirety of the original St. Paul’s Cathedral was denied due to its scope and expense, so Wall applied again with a smaller proof of concept project: a 3D model of the northeast corner of the cathedral churchyard, where people gathered around Paul’s Cross, an outdoor preaching station, on Sunday mornings at 10 a.m. to listen to two-hour sermons.

[Image: A high-definition fly-around video of the visual model of Paul’s Churchyard.]

Then Wall learned something new from Dr. Bernard Frischer at the University of Virginia, who created a digital model of Rome at the height of its empire called Rome Reborn. After Wall explained his idea, Frischer said, “Yes, you can do that, and you can hear it, too.” He went on to explain acoustic modeling, which takes information about the dimensions of a space and the acoustic properties of the materials of which it is built to map how sound would behave in that space. The process works because, unlike the complicated interplay of light with surfaces, sound only can be absorbed, dispersed or reflected in predictable ways.

Acoustic modeling turned out the be the novel twist the grant application needed. With $50,000 in hand, Wall and his team created an audiovisual model that allowed them to consider the experience of people standing at various distances from the preacher in crowds of up to 6,000 using recreated audio of John Donne’s sermon for November 5, 1622. For the first time, they were able to answer questions such as, “How well could a listener actually hear a sermon delivered by an unamplified voice in this context?” The great discovery was that the shape of the space actually created an amplification system, something Wall and his team believe was probably unplanned, that allowed listeners to hear the preacher if the crowd remained quiet. The St. Paul’s Cross Project won awards from the John Donne Society and the Award for Best DH Data Visualization from DH Awards, a digital humanities society, in 2014.

Their success was the boost Wall’s team needed to receive a larger NEH grant of $325,000 for the Virtual St. Paul’s Cathedral Project. There was one caveat: The commercial acoustic modeling software they had used for the St. Paul’s Cross project was cost-prohibitive for most academic use, so the NEH made the funding dependent upon Wall’s team creating an open source acoustic modeling software. Once again, Wall turned to a colleague for help. The College for Engineering had recently hired Dr. Yun Jing, an acoustic engineer, and, when Wall approached him with the idea, Yun embraced it. 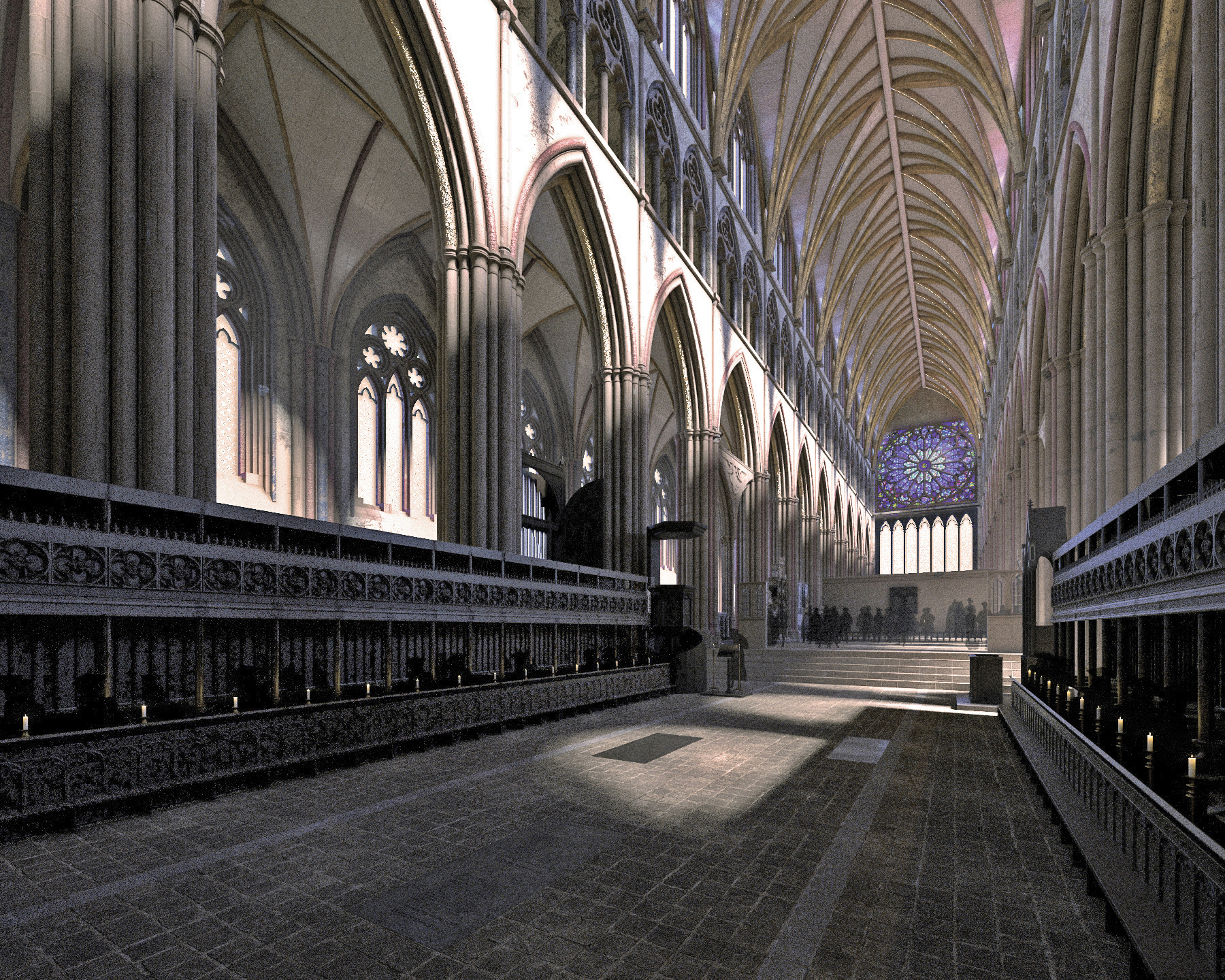 Wall found additional partners in John Schofield, an English architectural historian; Roger Bowers, a musicologist and music historian at Jesus College at Cambridge University in England; and Jesus College’s choir director Richard Pinel, who agreed to provide advice on period musical repertoire and to allow the choir to record it. He also met David Crystal, a historic linguist who recreated the accent of Elizabethean English by studying rhyme schemes in period poems, who agreed to provide an original pronunciation script and volunteered his son, Ben, an actor with experience performing in original pronunciation Shakespearean plays, to play John Donne.

[Image: A rendering of the St. Paul’s Cathedral choir as seen from the dean’s stall.]

[Image: A high-definition fly-around video of the visual model of St. Paul's Cathedral.]

The final product includes six worship services: on Easter Sunday in 1624, Morning Prayer; the Great Litany; the Eucharist with a surviving sermon by Bishop of Winchester Lancelot Andrews, who never actually got to preach it; and Evening Prayer with the sermon John Donne preached that afternoon, plus Morning Prayer and Evening Prayer on the Tuesday after the First Sunday in Advent in 1625. The services demonstrate the full breadth of worship experiences in the Church of England in the 1620s, achieving Wall’s 50-year goal of making real the power of public, corporate worship in the world of Cranmer and Donne.