Deacon Reflection: A Story of Faith 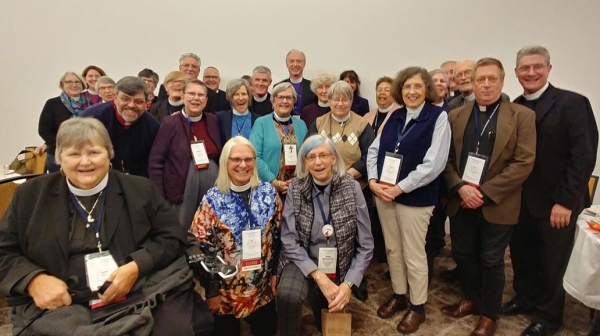 By The Rev. Harrel Johnson

On behalf of the Bishop’s Committee for the Diaconate, I offer this gift to you all for the holiday season.

Some of you may know that in my other life, I am a farmer.  A goat farmer or goat herder to be specific, and it is during this time of the year that this story comes to mind. It is a story that defines life for me in so many ways.

You won’t find it in the scriptures, but it could possibly have been. And if it had been witnessed by more than one person, it probably would have been.

In a small village in the foothills near Bethlehem lived a poor family of goat herders.

Joseph and Miriam were growing old, and it became more and more difficult for them to care for their animals, despite the fact their herd was their only real wealth.

The land was far from being lush; thus, Joseph had to move his animals from place to place in search of vegetation for the goats to browse on.

It was a long and arduous process, and there was little money to replace the stock as it grew older.

One by one the herd decreased.  Soon, Joseph and Miriam had only six animals left.

“My husband, we must think about moving away from our beloved home," Miriam said one night as she came into the simple house after checking the herd. The six goats slept, nestled together, in the courtyard just outside the entrance to the house.

“What would you have me do, Miriam?" her weary husband asked. "I cannot become a merchant or a musician at my age. I know only the life of a goat herder and only the land that was my father's.

“Be of faith. God will answer our prayers. He will help us survive as he helped my father and my father’s father."

But a miracle did not happen for Miriam and Joseph.

The little herd dwindled to only one male and one female. Soon Miriam could no longer find the strength to believe that a miracle might come.

Joseph had not given up.  Each Sabbath eve, he went higher into the foothills to ask God for help, even into the coldest nights of winter.

On a particularly dismal night, Joseph went off for his Sabbath prayer.

The night turned cold and blustery. It was hard to say the prayers aloud as his teeth chattered and his hands grew icy. He moved into a shallow opening that might have been a cave had the hill been more forgiving, falling asleep from exhaustion and worry.

In his sleep, Joseph saw his two remaining goats and prayed a dreamy prayer that they might multiply.

He awakened to find the two goats had trailed him to his place of solitude. Both lay curled up at his feet as though adding their warmth to his body and their souls to his prayer.

"My little ones, you should not have come all the way so late at night," he said quietly, watching their even breathing.“I’m afraid that Miriam was right. We have been abandoned. Perhaps you two shall be the last of our herd.”

For an instant, the words hung in the air. Then from the sky burst a shower of light radiating from a glorious star.

Joseph jumped to his feet. The goats scampered behind him. What was this wondrous star? The old man reached behind him to reassure the cowering goats.

The three stood transfixed in time as angels sang out, “All creatures of the earth shall be fruitful and multiply. This is the word of the lord on this night of miracles.”

When it finally receded, Joseph could not say how long the star stayed in the sky.

He led the goats back to the courtyard, sitting beside them as they went back to sleep.

Looking up, Joseph smiled knowingly. Warmth spread across his heart. His faith, which had almost wavered earlier in the day, was stronger than ever.

The winter gave way to summer. The land was once more green with life. And Joseph delighted in the newborn kids born late in the spring of that year. Amen.

A Blessed Holiday Season to you all!