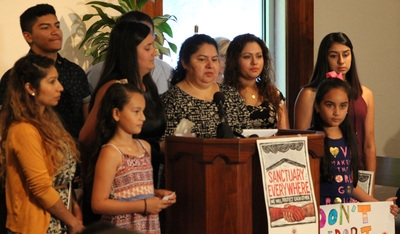 Over the Memorial Day weekend, the leadership and congregation of St. Barnabas, Greensboro, took the prayerfully considered step of offering temporary shelter to Juana Luz Tobar Ortega, an immigrant facing deportation on May 31.

In the coming weeks, while the congregation and other volunteers provide a safe place for Ortega, American Friends Service Commitee (AFSC), together with a network of partners, will lead a campaign to enlist the help of government officials in the hope of obtaining a stay of removal.


Juana is a mother of four who lives in Asheboro and has worked at the same textile company in High Point as a sewing machine operator for the last eight years. She arrived in 1994 from Guatemala, fleeing violence, and applied for asylum status. Her petition was denied, but she was allowed a work permit while she filed an appeal, which took six years. In 1999, her eldest daughter in Guatemala suffered a life-threatening illness, and Juana left the country and returned without permission in order to be her daughter’s caregiver. ICE subsequently revoked her work permit, ordered her to leave the country, and in 2011 took her into custody, then released her a week later. Since then, she has reported to the Charlotte ICE office periodically for required check-ins, but last month, instead of accepting her attorney’s plea for a stay of removal, ICE ordered her to prepare for voluntary departure, telling her she had until May 31 to leave the country, potentially leaving her husband, kids, uncle and cousins behind.

How You Can Help

For those called to do so, there are many ways you can help.

Volunteer to help at St. Barnabas with staying overnight, providing childcare, and other tasks.

Jueves for Juana (Thursdays for Juana). Every Thursday, call the offices of Senator Thom Tillis. Ask him to request that ICE stay the order of deportation and to continue granting her deferrals until legal status can be obtained.

After Six Months of Sanctuary, a Church Becomes a Family Home

By Diocesan House Over the Memorial Day weekend, the ...