Campus and young adult ministry provides an amazing opportunity to communicate the Gospel of Jesus Christ within central North Carolina's vibrant higher education communities and other gatherings of young adults throughout the Diocese.

Currently, there are eight Episcopal and two ecumenical campus ministries that provide support, fellowship, worship, reconciliation, spiritual formation and outreach opportunities for students on college campuses throughout the Diocese. 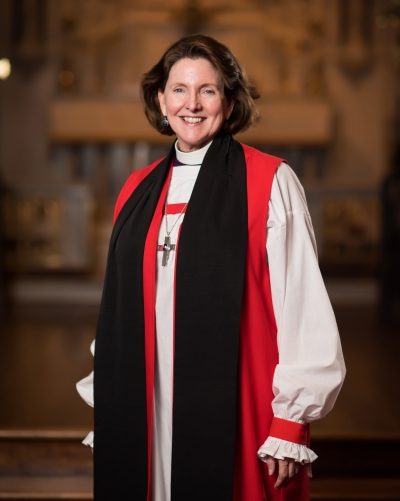 
Anne Elliott Hodges-Copple was elected the Diocese's sixth Bishop Suffragan and the first female bishop of the Episcopal Diocese of North Carolina on January 26, 2013, at the 197th Annual Convention. She was consecrated on June 15, 2013, in Duke Chapel on the campus of Duke University in Durham, North Carolina.

Bishop Hodges-Copple grew up in Dallas, Texas, and attended Duke University, where she received her Bachelor of Arts in 1979 with a major in public policy. She earned her Master of Divinity from Pacific School of Religion in Berkeley, California, in 1984.

In the years between college and seminary and then seminary and ordination, Hodges-Copple worked as a community organizer in Massachusetts and Appalachia and as a shelter director for victims of domestic violence in North Carolina. She was ordained a deacon in 1987 and a priest in 1988.

Bishop Hodges-Copple has served her entire ordained life in the Diocese of North Carolina, working 13 years in parish ministry and 13 years as a campus minister. She served as the rector of St. Luke’s, Durham, until she was elected to the episcopate. Bishop Hodges-Copple has a particular passion for shaping mission and ministry to be attuned to the voices, needs and wisdom of disempowered communities.

In her role as Bishop Suffragan, Bishop Hodges-Copple has particular responsibilities in campus and young adult ministries, new mission starts (Galilee ministries), the Racial Justice and Reconciliation Commission, the ordination process for the diaconate, global partnerships for mission, ecumenical and interfaith collaborations and the pastoral care of retired clergy, their spouses and surviving spouses. In the spring of 2018, she led a pilgrimage to the Holy Land, her third such pilgrimage, and plans another in 2020.

Hodges-Copple is currently a member of the Executive Council for The Episcopal Church, the Board of Historic Black Colleges & Universities and the Task Force for Social Advocacy. She served on the Special Legislative Committee for Marriage at the 2015 General Convention in Salt Lake City and chaired the House of Bishops’ Legislative Committee on Social Concerns at the 79th General Convention in Austin, Texas. She is also a member of the Bishops United Against Gun Violence.

During the transition between the 11th and 12th Bishops of North Carolina, she served as Bishop Diocesan Pro Tempore, the ecclesiastical authority of the diocese.

She and her husband, John, have three adult children. John is Director of Planning for the Triangle J Council of Governments.

Find a Group Near You