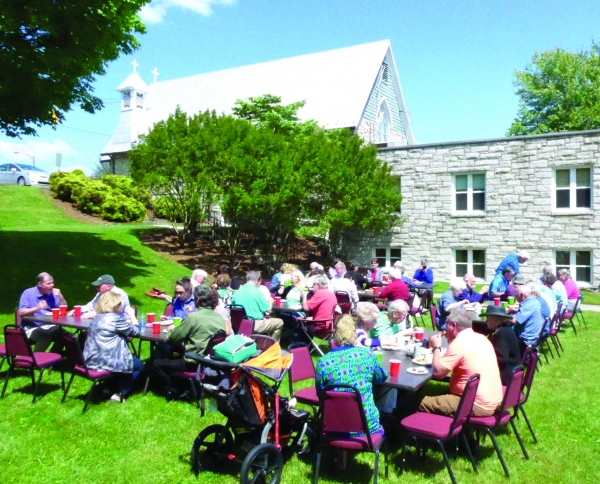 I remember last year when the pandemic began, wondering what Easter would be like that year. Well, we weren’t able to worship as we had hoped, but Easter happened anyway. And we found that somehow Jesus showed up Sunday after Sunday in our midst, first as we watched services from the National Cathedral, then the Diocese, and then via Zoom.

When we finally learned how to Zoom, our congregation began to gather again online. Our lectors read the scriptures; our organist, Larry Kessler, played from home; and we all praised God with hearts and hands and voices.

As difficult as it was to adapt to not being able to gather in person, ministries were renewed and new ways to minister emerged. Our pastoral care committee became very active through phone calls and sending cards. Our Staples Food Pantry and Lyn’s Medical Loan Closet found ways to continue to serve the community while maintaining safe practices. Parishioner Denny Jennings started Christian formation in the form of Kidz Zoom. Trinity Chats became a weekly event where parishioners gathered online for fellowship. The “Knit One Pray Too” group continued to create beautiful prayer shawls and prayer squares that were mailed to those in need.

Also, two new ministries emerged during the pandemic. A few days before Christmas, we received a message from the Humanitarian Border Coalition at our southern border, which is a group of churches that help refugees. U.S. Immigration and Customs Enforcement (I.C.E.) called them to ask if they knew of any sponsors that could take a mother with an infant from Ghana. After several calls with other organizations, one of our parishioners, Kellan Wilsonwithers, received a call. Kellan and I both felt that receiving a call about a mother and child seeking refuge at Christmas was more than a coincidence. So Beatrice and her now 7 month old, Lailaity, are beginning to feel at home in Mt. Airy. The congregation has come together to provide shelter, clothing, food, transportation and love.

The pandemic also revealed a need among children who were in school virtually most of the week. So Trinity began hosting a Youth Group providing transportation, food, tutoring and fellowship.

Since no one could go into the church this past year, our worship committee found a way to bring the indoors outside. They created a large lighted Advent wreath and then during Lent created a cross of sticks where people could leave their burdens. The cross then bloomed with flowers of the resurrection on Easter.

But one of the most important things that we learned this year happened late on the evening of Maundy Thursday, when one of our parishioners, Jack Campbell, passed away. Jack grew up at Trinity but lived outside Washington, D.C., for many years and worshiped with us whenever he was in town. But ironically, this horrible pandemic and technology made it possible for Jack to be an active and more beloved member of our congregation even from his hospital bed at Walter Reed these last few months.

But when I got word of his death on the morning of Good Friday, the only words I could utter were “Oh my God, Oh my God!” Not unlike what I had imagined the women and the apostles saying with their head in their hands that first Good Friday.

But here’s the other thing I know. Easter happened whether the women, Peter, John or the other disciples understood or believed it. Jesus was raised from the dead.

And two days before Easter, as we stood at the tomb to which Good Friday took us, I knew beyond a shadow of a doubt, that Jack, who wanted to live so badly, was alive, alive with Jesus in paradise. Because Easter happened. Jesus is alive.