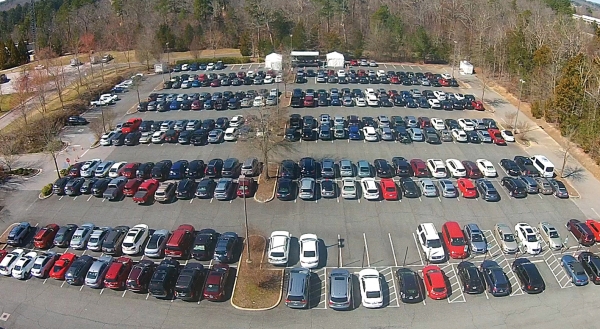 The 205th Annual Convention of the Episcopal Diocese of North Carolina took place on Saturday, March 6, 2021, at the Friday Center Park & Ride Lot in Chapel Hill. Using a drive-in format, attendees remained in their vehicles and listened to audio provided in English and Spanish on FM radio stations.


In addition to the business of addressing resolutions proposed to ensure the continuity of diocesan offices and the expansion of options for meetings and elections, the main order of business was the adoption of Resolution 205.5, which amended the canons to allow future diocesan conventions and annual parish meetings to incorporate teleconferencing technology as an official means of gathering.

The need for Resolution 205.5 arose as the 205th Annual Convention, originally scheduled to take place in November 2020, was postponed due to COVID-19. Before Convention took action on March 6, the canons required that diocesan conventions take place in person, something that was not possible to do safely during the pandemic. In order to accomplish the business of the Diocese, the Convention adopted Special Rules of Order, which expired upon adjournment. In order to allow for feedback and questions from delegates, the Diocese got creative during the lead-up to Convention.

[Image: While most attendees did not have an up-close (or drone’s eye) view of the proceedings, the 205th Annual Convention accomplished its goals.]

Though the Convention itself lasted only 30 minutes, a great deal more time was dedicated to it before March 6 to ensure all who wished to follow the progress of Convention business had a chance to do so.

The 2021 budget was shared via three pre-Convention webinars, serving as the first round of the canonically required pre-Convention meetings and giving attendees the chance to ask questions and share comments. The budget presentation was also shared during a leadership call with diocesan-wide clergy and lay leaders. Lastly, an abbreviated version of the presentation was shared at the online November 21 diocesan gathering, “Behold, I am Doing a New Thing,” to ensure any delegates who had not previously seen it, did. The November gathering is also where the bishops’ traditional address took place.

Elections to positions on Standing Committee and Diocesan Council, which normally take place at Convention, also took place during the fall. The then-current members of Standing Committee and Diocesan Council exercised their authority under the Constitution and Canons of the Diocese to elect replacements for their members whose terms ended December 31, 2020. The call for nominations went out, nominations were submitted in November, and the new members were elected and took office to serve full three-year terms as of January 1, 2021.

As the 205th Annual Convention approached, in addition to online second-round pre-Convention convocation meetings, a public meeting was offered to anyone who wished to review and discuss the proposed resolutions. That meeting was followed with a webinar conducted by Secretary of Convention Chuck Till to review the Special Rules of Order that would be in place on March 6, giving those who were to attend a chance to ask questions.

Last but not least, all delegates to Convention—clergy and lay—received regular updates since the new year with pertinent materials as they became available, as well as notices of the public meeting and webinar.

Worship has always been a focal point of Convention, and this year was no different, though a creative approach was required. In the interest of keeping the gathering time as short as possible as attendees were required to stay in their vehicles, worship was offered in two pieces. First, a Liturgy of the Word with the Rt. Rev. Sam Rodman serving as preacher was pre-recorded and offered on the diocesan website, the Convention app and social media channels Saturday morning with a hope it could be enjoyed during the delegates’ drive to the venue.

The Liturgy of the Table with Communion in one kind using individually wrapped wafers was celebrated at Convention itself as delegates listened to the second half of the pre-recorded liturgy, with Rodman serving as celebrant, playing over the radio. The Rt. Rev. Anne Hodges-Copple was unable to attend Convention due to a death in her family, and everyone in attendance kept her in their prayers.

THE BUSINESS OF CONVENTION

Though abbreviated, the business of Convention was conducted and completed. Voting took place via the honking of car horns, in lieu of the usual verbal or color-coded card voting systems.

In the business of Convention, the 2021 budget as adopted by Diocesan Council was affirmed.

Voting on resolutions went as follows. Certified copies of all resolutions are available on the diocesan website.

Before adjourning, the Convention voted to suspend the Special Rules of Order and passed a resolution of condolence for Hodges-Copple and her family.

The last order of business was to move and vote that the 206th Annual Convention will take place November 19-20, 2021.

And with that, the 205th Annual Convention was adjourned.

There is no doubt the 205th Annual Convention will always be remembered for the unique way in which it was carried out because of an extraordinary set of circumstances. But hopefully, it will also be remembered as an event that demonstrated the creativity, resiliency, dedication and faith of all involved, from the Dispatch of Business team, to diocesan staff, to, most important of all, the people of the Episcopal Diocese of North Carolina who stayed the course and made it all happen.