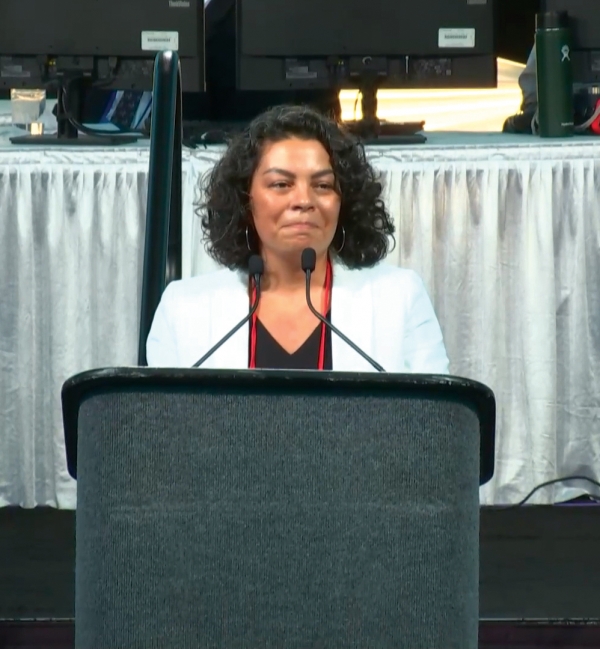 Normally attended by approximately 10,000 people, this General Convention was significantly reduced, with only active bishops, deputies and essential personnel attending. Episcopal-affiliated groups were asked not to hold their usual gatherings, and there was no exhibit hall. Yet, even with the condensed timeline and reduced attendance, significant business was conducted and history made.

When the decision was made to shorten the 80th General Convention, it was noted that part of the reason the gathering was being held at all was to attend to “the essential legislation that [could] not wait until 2024.” That business included the passing of a biennial budget and the election of the next president and vice president of the House of Deputies.

Even with the challenges presented by the new parameters, more than 400 resolutions were proposed to General Convention. Legislative committees tasked with working through those resolutions met online for several months prior to the convening on July 8. Because of the adaptive work done, General Convention passed several key pieces of legislation.

Many of the notable resolutions passed in the area of Racial Justice and Reconciliation were proposed from the work of the Presiding Officers’ Working Group on Truth-Telling, Reckoning and Healing. Their report prior to General Convention outlined the proposal for next steps in the Church’s journey of building an accurate racial history and a plan to begin to address past wrongs. The work happening in the Diocese of North Carolina is very much a part of this plan, as ministries within the Diocese were lifted up six times in the report as examples of the kind of work proposed by the working group.

All of the resolutions proposed in the report passed, including:

Other resolutions passed included ongoing support for HBCUs, including Saint Augustine’s University in Raleigh, one of only two Episcopal HBCUs remaining.

The Book of Common Prayer

Revisions to the Book of Common Prayer have been an ongoing conversation for several years, as the Church seeks to remain true to tradition while reflecting the love and needs of every person it serves.

This convention saw the first reading of a constitutional change to Article X, which, as reported by Episcopal News Service, “lays out how the Book of Common Prayer can be revised but has never specifically provided for authorized liturgies that are not proposed revisions to the existing book.” Several liturgies, such as same-sex marriage, have been authorized for “trial” or “experimental” use but no path exists that would move them from those designations to an actual place in the Book of Common Prayer. If the change passes a second reading at the 81st General Convention, again as reported by ENS, “Article X would, for the first time, define the Book of Common Prayer as ‘those liturgical forms and other texts authorized by the General Convention.’ In other words, liturgies that are not in the current prayer book…could be elevated to ‘prayer book status,’ whether they are replacing parts of the prayer book or standing on their own.”

The Book of Common Prayer is not being replaced, but a path has been proposed to help it have the potential to expand to include all those who use it. As of now, all authorized Episcopal liturgies can be found at episcopalcommonprayer.org.

Though creation care did not receive much of the spotlight at this General Convention, several resolutions were still passed. Among them were the direction of the Office of Government Relations and all Episcopalians to encourage and endorse “Green Deal” legislation; the continuing support of the United Nation’s Decade of Action and its Sustainable Development Goals; and the setting of a goal for the Episcopal Church to be carbon neutral by 2030. The urgency of this work was highlighted by the release of a climate letter by the House of Bishops. Officially called a “Mind of the House” statement, the statement called creation care “our first vocation.”

It goes on to state: “Climate change and environmental degradation are manifestations of our turning away from God. The effects of this willful separation from God resonate across our collective lives: All areas of justice are either worsened or made better depending on the health of the planet…As people of faith, we are not without hope, but the sustainability of God’s creation demands our action.”

Creation care is expected to be the central topic at the Lambeth Conference convening in Canterbury, England, this summer. (See page 26 for an examination of climate change as a biblical issue.)

The 2023-2024 biennial budget was adopted as presented, but what was notable was the passing of a resolution that eliminated the Joint Standing Committee on Program, Budget and Finance. The budget, as developed now, is overseen and largely assembled by the budget committees of Executive Council, which then pass it to the Committee on Program, Budget and Finance shortly before General Convention to review and present. The new approach streamlines the process to allow those most familiar with the budget to develop and present it to General Convention.

HISTORY MADE IN THE HOUSE OF DEPUTIES

Among the agenda items deemed essential business was the election of the next president of the House of Deputies. After 10 years of service, outgoing president the Rev. Gay Clark Jennings presided one last time before ceding the gavel to her successor.

On July 9, the deputies of the 80th General Convention elected Julia Ayala Harris of the Diocese of Oklahoma as the house’s next president. A Latina who has spent more than 20 years in the governance structure of the Episcopal Church, including serving on Executive Council and the Presiding Officers’ Working Group on Truth-Telling, Reckoning and Healing, she is the first woman of color elected to the position. A self-proclaimed “church geek,” she applied Dolly Parton’s advice to “figure out who you are and then do it on purpose” to the impact the Church can have. “You have sent the message to church geeks everywhere,” she said, “that if you try hard and you read the canons and you read all the minutes, you can actually make a huge difference on this church. Be a church geek on purpose.”

Ayala Harris gave thanks to Jennings, saying she was “unbelievably honored” to follow her, and shared gratitude for the other candidates who stood for election. She concluded her remarks with a call to action to the Church: “Get ready to roll up your sleeves because we got a lot of work to do between now and the 81st General Convention.”

On July 10, the Rev. Rachel Tabor-Hamilton of the Diocese of Olympia was elected vice president of the House of Deputies. Tabor-Hamilton is Shackan First Nation, the first ordained woman elected to the position, and, as reported by Episcopal News Service, “only the third woman to serve in this capacity since the role of deputies’ vice president was created in 1964.”

The elections of Ayala Harris and Tabor-Hamilton were not the only election results of note for the Diocese of North Carolina. Several members of the Diocese stood to serve in other positions, and every one of them was elected or appointed:

Another name familiar to the Diocese, the Rt. Rev. Marty Stebbins, former rector of St. Timothy’s, Wilson, was also appointed to the Board of Archives.

The Diocese of North Carolina can take pride in its representation in the leadership of the Episcopal Church. In addition to those preparing for their roles in the positions above, the Rt. Rev. Anne Hodges-Copple and Alice Freeman continue to serve on Executive Council.

Though General Convention was short, the notable moments were many.

Had the 80th General Convention proceeded at its usual length and in its usual format, the conservative estimate for the rate of COVID-19 infection was estimated at 10%, which would have put it at more than 1,000 people, not including any spread to the hospitality workers with whom attendees would interact, as tracking those numbers would not have been possible. When organizers made the decision to reduce attendance to the approximately 1,200 people deemed essential, is was done with “love thy neighbor” in mind and the hope of drastically reducing the expected transmission rate.

Attendees were required to be vaccinated, produce a negative COVID-19 test upon arrival and test each morning, and wear masks at all times while indoors. The Houses of Deputies and Bishops stayed apart; even when the joint session for the budget presentation took place, the bishops sat in the gallery, normally reserved for alternates and visitors. The precautions put in place worked. As of July 18, only 32 positive cases had been reported.

Among the many things that looked different at this General Convention was the daily worship. Because of the precautions in place, worship took place in the respective Houses, with prerecorded sermons shared via video each day. Sermons were preached by the Most Rev. Michael Curry, presiding bishop; the Rev. Gay Clark Jennings, president of the House of Deputies; the Rt. Rev. Eugene Sutton, bishop of the Diocese of Maryland; and Julia Ayala Harris, president-elect of the House of Deputies. All sermons can be found on the diocesan hub.

Much has been said by members throughout the Church in response to the ongoing epidemic of gun violence. Yet another incident of violence occurred on the night before General Convention convened, when a man was shot and killed near the Baltimore Convention Center. Following the afternoon session on July 8 and organized by Bishops United Against Gun Violence, hundreds of Episcopalians took to the streets for a march and prayer service, raising their voices in a unified call to end gun violence.

The march was not the only acknowledgement of those who have fallen to gun violence. In both the House of Deputies and the House of Bishops, the victims of the June 16 shooting at St. Stephen’s in Vestavia Hills, Alabama, were honored.

Two dioceses in Texas were made all the stronger when a resolution was passed to merge the Episcopal Church of North Texas with the Diocese of Texas. Through a process identified as “reunion” because of the dioceses’ common roots, the North Texas diocese found a new home in the Diocese of Texas after years of struggle following a 2008 schism over the ordination of women and LGBTQ+ people. With fewer than 4,000 members, North Texas Deputy Katie Sherrod said in remarks of support for the resolution, the remaining faithful were a “tiny, fierce” group that welcomed a partner that would help them continue the work of a region that never quit sharing the message of God’s love.

The Rt. Rev. Barbara Harris was the first woman consecrated a bishop in the Anglican Communion and a lifelong champion for social justice. Much beloved, in the wake of her death in March 2020, 16 resolutions were submitted to the 80th General Convention proposing expedition of her addition to the calendar of Lesser Feasts and Fasts as a Church saint. The traditional wait time for such an addition is 50 years following a person’s death, though there is no canonical requirement, and exceptions have been made in the past, such as the addition of the Rev. Dr. Pauli Murray. Though the waiver did not go through this year, a compromise was reached, with a commemoration of Harris’ February 11 consecration date added to the Lesser Feasts and Fasts calendar and the commemoration of her life referred to the Standing Commission on Liturgy and Music.

Though social time, related gatherings and the exhibit hall were missed, there is no doubt that the “essential business” of the Episcopal Church and a great deal more was accomplished in the shorter, smaller 80th General Convention. The 81st General Convention is scheduled to take place in July 2024 in Louisville, Kentucky.

The deputation for the 81st General Convention from the Diocese will be elected at the 207th Annual Convention in November 2022. Nomination information can be found at episdionc.org/annual-convention.

Visit the diocesan hub to enjoy more from the 80th General Convention, including recaps from the deputies, in-depth coverage from Episcopal News Service and House of Deputies News, sermons, and North Carolina connections to it all.