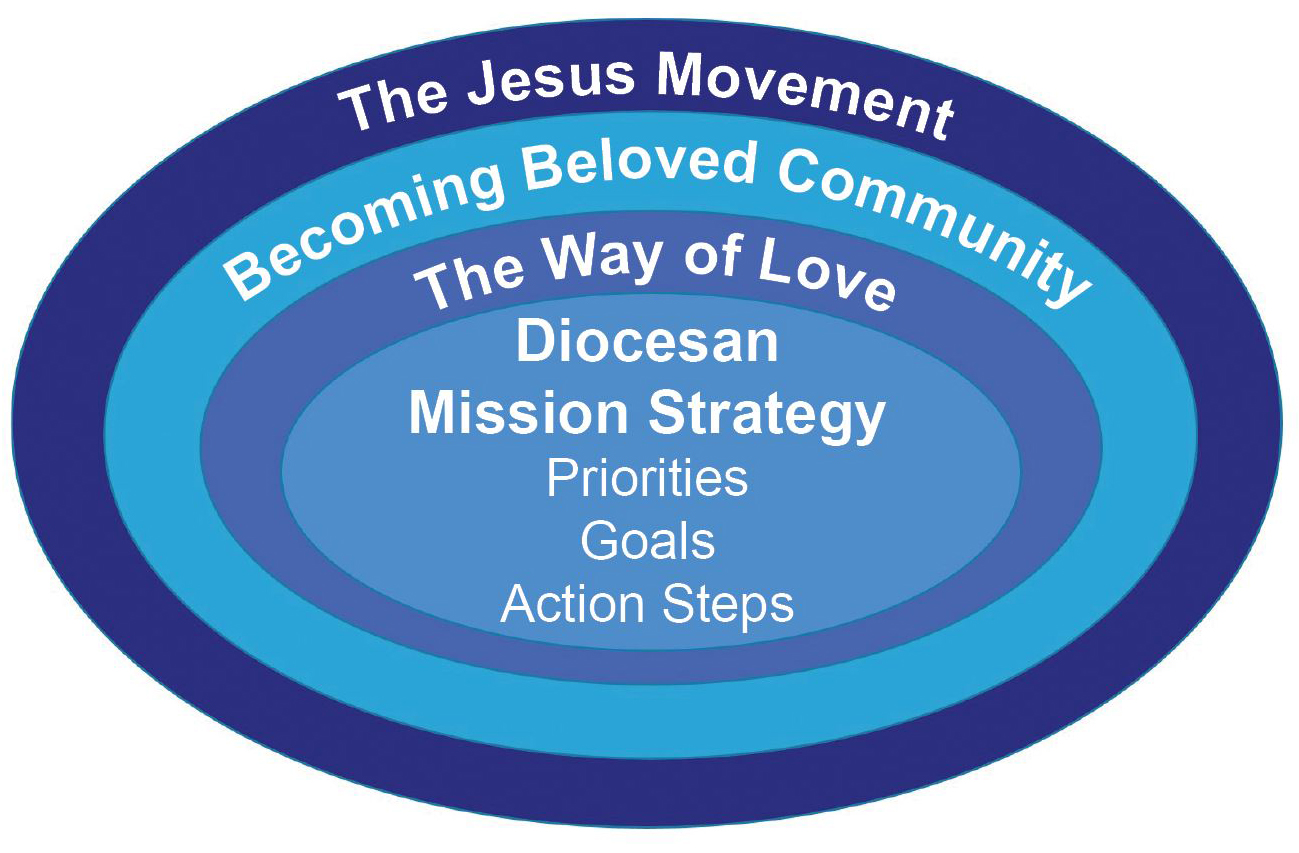 It’s fair to say the pandemic brought the best-laid plans for 2020 to a screeching halt last March. Work that began in earnest in January and February was placed on temporary hold as the world went into what we all thought was going to be a brief lockdown to bring under control the spread of the COVID-19 virus. As it quickly became apparent that a few short weeks wouldn’t be nearly enough to accomplish the task, the scramble to adapt to a new way of life began.


It was no different for the Diocese of North Carolina. What started as a “time out” of sorts became a surreal realization we were now, for an indeterminate future, a remote work force. Momentum built in the early months of 2020 came to a halt as attention was turned to figuring out how to live an online life, stay connected with churches across the Diocese and process the overwhelming amount of changing information that flowed daily. Throughout the spring and summer, diocesan staff and church leaders worked together to learn how to bring worship online, keep congregations connected and safe, navigate the often confusing maze of resources and financial assistance, and, always, live into loving our neighbors, even as the ways we could do that seemed to shift constantly.

The spring and summer months of 2020 required flexibility and adaptability on a scale many had not lived through before. But as we settled into pandemic life and the summer turned to fall, an intentional decision was made to shift away from the “reaction” mode in which we’d been living and return to the “proactive” approach with which we’d begun the year.

A RETURN TO OUR ORIGINAL PROGRAMMING

At the 204th Annual Convention of the Diocese of North Carolina in November 2019, the Rt. Rev. Sam Rodman outlined in his address the work that had happened over the preceding two years in our journey to Becoming Beloved Community, noting that only together would that work continue, for “you are our holy partners in this heavenly calling.” During the course of that Convention, plans were outlined for taking the next steps in our mission priorities.

That work began in earnest at the start of 2020. Traditionally a time when several retreats are held for various bodies of diocesan leadership, the beginning of 2020 featured three: the diocesan Team of Teams (bishops, canons, missioners, finance and communications); a joint retreat of the Diocesan Council and Standing Committee; and a full-day retreat with all diocesan staff.

The purpose of those meetings, among specific business relating to the groups, was to spend time with diocesan priority areas and discuss goals, approaches and more. The intent was to gather the input and wisdom of these three particular groups and use the conversations as the foundation for the diocesan mission strategy.

Each group received a presentation that included information and materials to start a conversation around the true definition of diversity and inclusivity as well as discussion around the difference between change and transformation, the latter being the long-term goal of moving toward Becoming Beloved Community.

Following the presentation, three areas of diocesan mission priorities were brought forward for discussion and goal-setting. The three areas receiving focus were racial justice and reconciliation, collaboration and new communities, and congregations and vulnerable communities. It was made clear formation and creation care remain equally important, but the goals set forth for the three named priorities would inform the work of the other two.

During each retreat, participants broke into subgroups, with everyone choosing the area to which they felt most strongly called. From there, goals were proposed for that particular area, timelines put forward, existing resources identified and potential obstacles named.

The work of these retreats was then compiled and shared with all who had taken part. It was clear at the end of this process that great energy was in place, as well as a desire to set a clear path with tangible timelines and measurable goals. Last, but perhaps most important of all, there was a desire to ensure a broad spectrum of voices were a part of that path’s creation, so the work was truly a collective diocesan effort and not a hierarchical directive.

The creation of the Mission Strategy Task Force was ready to begin.

The Mission Strategy Task Force was imagined as a group comprised of two members each from diocesan staff, the Standing Committee and Diocesan Council, plus four at-large parishioners from across the Diocese. The hope was, with a broad range of voices and experience, the goals would reflect and include all in our roadmap toward Becoming Beloved Community.
“The process was designed from its inception to be a collective, grassroots effort of the Diocese, rather than a top-down approach,” said the Rt. Rev. Sam Rodman, bishop of the Diocese of North Carolina. “With that as our guiding principle, we needed as many voices included in that group as possible, while creating room to invite still more as the task force work developed.”
The assembly of the Mission Strategy Task Force began in the first days of March 2020 and understandably was halted when the pandemic came to the forefront of our lives and became the center of thoughts and attention for months. But as summer waned and fall approached, the momentum lost earlier in the year was restarted as conversation turned once again to leaning in to our planning and resuming the work of defining our next steps.

Those who expressed interest in serving early on quickly affirmed they were ready to go. Invitations were extended far and wide to fill additional spots, and, in the early meetings, it was clear that the first step was to share the work of the tri-diocesan retreats with the wider Diocese and invite deeper conversation. The venue selected was the online diocesan celebration on November 21, where members of the task force presented what was learned and discussed at the retreats, the questions that emerged, and the steps the task force intended to take in the ensuing months. The several hundred attendees of the gathering were then invited into breakout rooms related to several topics around mission priorities, where room leaders gathered the feedback to take back to the task force.

When the task force began regular meetings following the November gathering, the first order of business was not to delve into cementing goals and timelines. Rather, the first several gatherings centered on conversation around our core values and theological foundation, discerning what they meant to those on the task force and the role they would play in the strategy to be created. The conversations were deep, rich, candid and faithful, proving to be an invaluable step in the development process.

Over the ensuing months, those conversations continued along with discussions about the actual process of strategic development, and almost exactly a year after the work was interrupted, the task force turned its focus to beginning the next-step, deeper work of the subgroups, every one of which focuses on a missional priority area:

The members of the subgroups will not do the work alone and expect to present opportunities to see the plan-building in progress and solicit feedback between now and the formal presentation at the 206th Annual Convention in November 2021. As it’s been said all along, the journey to Becoming Beloved Community is one we are on together, and the process of developing our next strategic steps is one that invites all to add their voices to it.

MEET THE TASK FORCE (TO DATE)