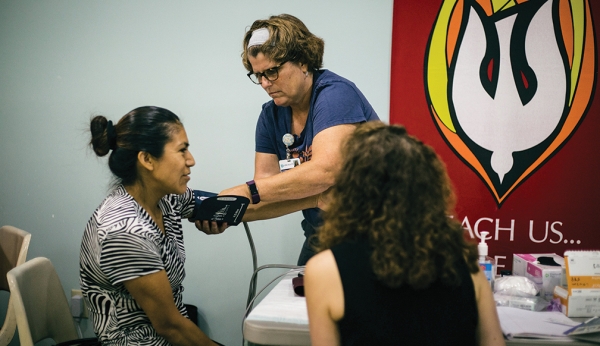 Across the Diocese of North Carolina, churches serve their communities in ways big and small by meeting people in their neighborhoods and learning from them about the community’s needs. Sometimes the discernment process leads to major new initiatives, like Christ’s Beloved Community/Comunidad Amada de Cristo, a bilingual church plant collaboration between The Episcopal Church and the Evangelical Lutheran Church of America, or Galilee Ministries of East Charlotte, a multi-ministry center offering more than a dozen services primarily to refugees from Southeast Asia. More often, though, churches address needs in their communities through smaller ministries that make a huge difference in the lives of those they touch.

The people of St. Andrew’s, Haw River, have long been in relationship with the families living in the mobile homes behind the church. The church provides tutoring for children in the neighborhood and has provided information about legal rights to the largely immigrant community. In 2017, rector the Rev. Miriam Saxon and the church’s former deacon, the Rev. Jan Lamb, were brainstorming additional ways to serve their neighbors when they decided to host a community health fair.

Former parishioner Sylvia Mand, a nurse practitioner with a passion for health education, took the idea and ran with it. Mand reached out to various community groups to engage their help in planning and promoting the event. She contacted Haw River Elementary School to post flyers, and the school volunteered to send home information about the clinic in students’ backpacks. Local businesses donated door prizes the church gave away at intervals throughout the day. Two employees at the pizza place next door to St. Andrew’s volunteered to provide Spanish translation. The church, which sits on Highway 70, placed a large banner in the yard, and the local paper wrote a preview article for the event.

On the day of the clinic in October 2017, more than 100 people visited the church, which has an average Sunday attendance of 40. Those who attended got free blood pressure and blood sugar readings from Haw River’s emergency medical services and fire department while their children explored a fire truck. Hearing and dental screenings were also available, and Rep. Mark Walker sent a staffer who set follow-up appointments for people having issues with their Social Security or Medicare. The fair also offered six health education talks, including one about domestic violence led by the Haw River police department.

The event might have saved at least one life. One woman who attended learned her blood pressure and blood sugar were dangerously high. She shared her test results with Saxon, who called a free clinic in Burlington to schedule a follow-up appointment. As a result, the woman’s diabetes is now under control.

The health fair at St. Andrew’s inspired a similar event elsewhere in the convocation, at Holy Spirit, Greensboro. Before she became Holy Spirit’s vicar, the Rev. Audra Abt served as the diocesan missioner in Greensboro, in which role she helped the church discern how to engage with the community during a series of walks through the neighborhood surrounding the church. As parishioners met their neighbors, they collected prayer requests and prayed with and for those who asked for it. After the walks, members would gather to pray, then look for themes in the prayer requests. Health problems arose as a common concern.

In the fall of 2017, as Abt was transitioning to her new call as Holy Spirit’s vicar, she met a community nurse in the course of her volunteer work as a chaplain with Faith Action International, an organization working with new immigrant families. The nurse, it turns out, was Maureen Flak, a member of Holy Trinity, Greensboro, who works with the congregational nurse program through Cone Health System—and who knew the program was looking for a partner in the medically underserved part of Northeast Greensboro where Holy Spirit is located.

“The community nurse program had been looking for the blessing of a space, and Holy Spirit [church] has been looking for even more opportunities and holy excuses to know our neighbors better,” Abt explained. “The Holy Spirit just kind of started orchestrating the dance to be a little closer and more choreographed.”

For the two health fairs they’ve hosted this summer, Holy Spirit has provided the space, outreach and hospitality; Holy Trinity provided the medical supplies and Cone Health provided nurses. Holy Spirit did minimal advertising via Facebook, online community event calendars, weekly local newspapers and flyers posted at small businesses. Nonetheless, in the weeks leading up to the first health fair on June 23, local organizations started calling with requests to set up tables during the event. The Center for New North Carolinians, the Mental Health Association of Greensboro, Faith Action International, North Carolina Legal Aid and Deez Doorz, a nonprofit serving women escaping domestic abuse situations, all had a presence during the first health fair. Volunteers from Holy Spirit, Holy Trinity and St. Francis cooked burgers and hotdogs and kept the kids entertained with crafts, games and face painting. Abt credits the communal, celebratory atmosphere with much of the event’s success.

“Joy and enjoying each others’ company is a huge part of community health and wellness. That is what the church can provide so legal aid and medical workers can do their jobs.”

“It was a tremendous amount of work,” Saxon acknowledged of the first health fair St. Andrew’s hosted. She presented a scaled-back version to St. Andrew’s vestry this month, and the church plans to work with Southern Alamance Family Empowerment, which does health fairs in Saxapahaw and is looking for host sites, to partner on its next event.

“Churches need to learn we can depend on the community,” Abt explained. “It’s not just the community depending on us. That’s not how Jesus intended it.”


FIXING IT FOR CHRIST 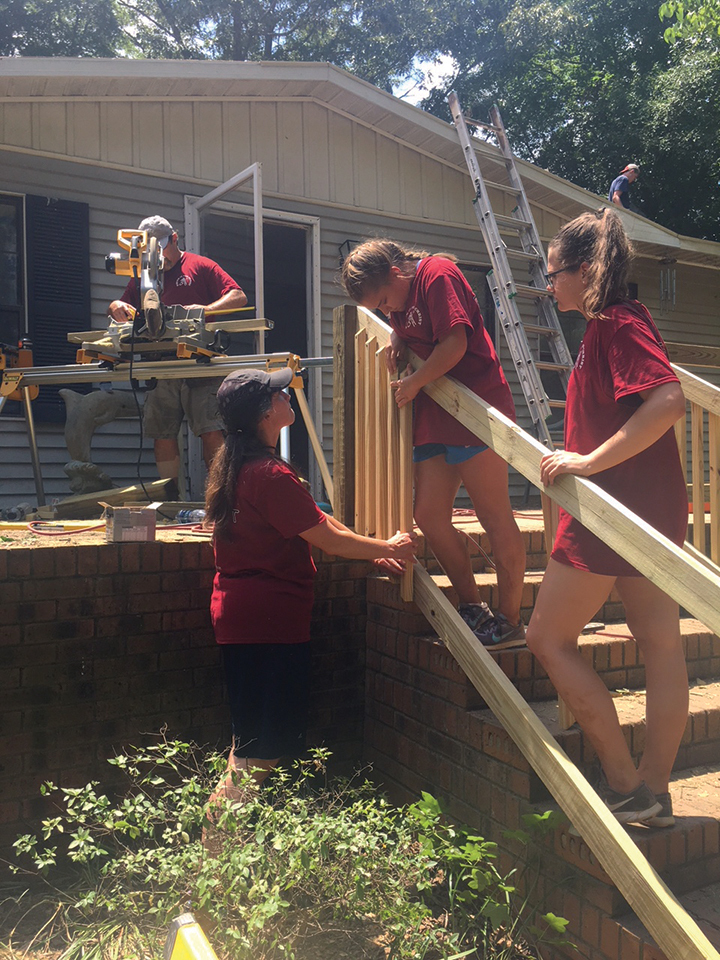 Just as lack of access to health care and struggles with medical expenses are common problems in the communities many of our churches serve, so are concerns about unsafe housing. Through a city-wide partnership among churches, community organizations and businesses, each summer Fixing it for Christ repairs houses in Waxhaw. The outreach ministry began in 2007 after members of Waxhaw United Methodist Church wondered why they were willing to travel for mission projects to rebuild houses after natural disasters but weren’t doing the same things to help impoverished families in their own community.

The ministry has grown each summer since then, and this year, St. Margaret’s, Waxhaw, participated for the first time. The new connection grew out of parishioner Traci Scott’s volunteer work. Scott met Terri Barbee of Waxhaw UMC during an outreach project and learned about Fixing it for Christ. Scott knew St. Margaret’s men’s group was thinking of starting a construction-related ministry.

“I said, ‘Don’t reinvent the wheel,’” Scott recalled. She partnered with Charlie Winsman, a member of the men’s group at St. Margaret’s, and the two joined the ecumenical planning committee of eight to 10 churches that spends the year fielding repair requests, working with contractors to vet projects and communicating with residents. She and Winsman tried to make it as easy as possible for St. Margaret’s parishioners to get involved by helping people sign up, breaking tasks into smaller chunks and being flexible about how some tasks were accomplished. For example, those who signed up to help prepare the three meals per day Fixing it for Christ provides its volunteers had the option of cooking as a group at the church or baking at home.

During a four-day period in June, 450 volunteers from 31 churches, including 30 St. Margaret’s parishioners, repaired 22 houses and prepared food for the construction volunteers. Scott and her 14-year-old son worked on the home of a neighbor with mobility problems whose house smelled so unpleasant, the team had to step outside to recover with some fresh air after they first entered the space. Soon, though, they had emptied the house, pulled up soiled carpet and replaced it with laminate, scrubbed and repainted the walls and helped the homeowner purge their belongings before resetting the house. Volunteers at other sites built wheelchair ramps, repaired sagging floors and replaced roofs. Scott emphasized the outreach wasn’t just about construction, however.

“We prayed with the homeowners every day and made them understand we care about them and aren’t just there to fix their house and leave,” she said. “They’re our neighbors. It’s what we’re called to do.”

St. Margaret’s ecumenical engagement with the community doesn’t stop with Fixing it for Christ. Inspired by an ecumenical group called Heart for Monroe in the county seat, almost 20 churches in Waxhaw started meeting in March.

“Some of us heard God tell us we needed to do something similar in our backyard,” Scott said.
The mix of mostly lay leaders plus some clergy are learning about each other’s ministries in an effort to avoid duplicating efforts and maximize impact, which includes supporting each other’s successful ministries with volunteers instead of starting new ones. 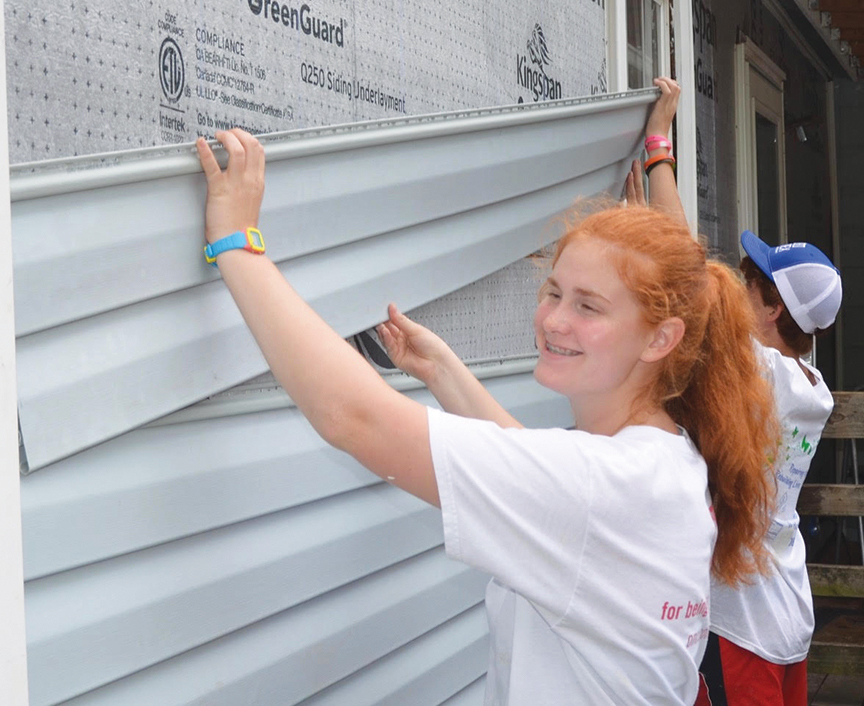 Offering space, volunteers and donations while addressing a myriad of community needs is something St. Andrew’s, Rocky Mount, does well. The Rev. George Greer, St. Andrew’s rector, gets a little help from the government to identify community needs.

“I actually look at demographics,” he explained. “I log onto the U.S. government website and look at demographics.” Greer’s research has helped inform St. Andrew’s participation in the community, which has a large transient population of people who move every few years. Rocky Mount families also face serious economic challenges with a poverty rate of 25 percent.

To address some of the community’s needs, every weekday morning during the school year the church preschool and kindergarten serve 40-50 children, with approximately the same number participating in the Afterschool Gang every weekday afternoon during the school year and all day during the summer months. The church’s food pantry distributes sacks of nutritious food to between 80 and 100 families each month, and a group of 16 regular volunteers delivers food in the community through Meals on Wheels on the third Thursday of every month.

St. Andrew’s does more than feeding and educating its community, however. Each year the church also donates back-to-school supplies, Thanksgiving turkeys and children’s Christmas gifts to dozens of families living in a nearby affordable housing apartment complex. When nearby Princeville experienced severe flooding in October 2016, Greer needed to rent a U-Haul truck to transport all of the donations parishioners gathered. During the summer, volunteers from St. Andrew’s participate in Gatekeepers, a collaboration among area churches to repair homes in the community.

Regardless of the exact work they do in their communities, these four churches serve as a reminder that high-impact service to the community need not always look like a new building, church plant or $100,000 project. Sometimes volunteer power, space and hospitality are exactly what the community needs.