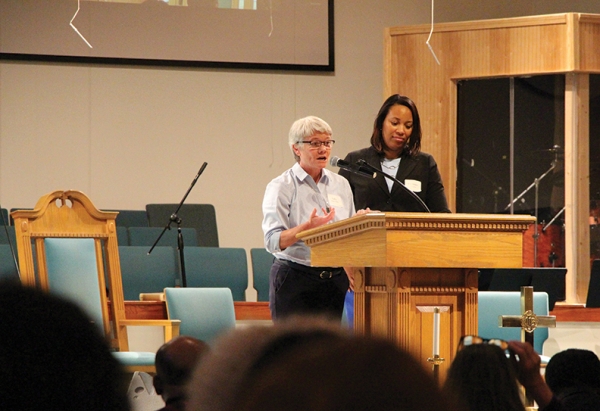 Five years ago during a Racial Equity Institute (REI) training, Durham Episcopalians DeDreana Freeman (St. Philip’s, Durham) and Cathy Rimer-Surles (St. Luke’s, Durham) were sitting in the outer circle of chairs reserved for people who had already attended the training at least once. As they tell it, after hearing a first-time attendee in the inner circle identify herself as an Episcopal priest, during the next break they “descended” on the woman, who turned out to be the Rev. Dr. Jeanine Driscoll (now priest associate at Advocate, Chapel Hill). Collectively, the three women recruited other local Episcopalians to attend an REI training and started hosting book studies in which they discussed systemic racism in the United States.

From that collaboration, Freeman, Rimer-Surles and Driscoll, along with the Rev. Monnie Riggin (now deacon at St. Andrew’s, Haw River) and the Rev. Javier Almendárez-Bautista (now associate rector at St. Paul’s, Cary), founded Episcopalians United Against Racism (EUAR). On its website, EUAR describes itself as “an independent alliance of anti-racist Episcopalians from parishes primarily based in the Episcopal Diocese of North Carolina…who are part of a growing movement of community members and people of faith who have devoted ourselves to the long-term, transformative work of creating racially equitable systems and organizations.” As its goals, EUAR names internalizing the inseparability of racial equity and anti-poverty work, and engaging with people from all backgrounds to challenge structures that perpetuate white supremacy in an age of “colorblindness.”

One of EUAR’s early projects grew from the founders’ experiences trying to extend what they learned in REI training. While many REI training participants are motivated to attend at least in part due to their faith, the workshop does not discuss a faith basis for anti-racism work. In response, three years ago EUAR began designing an eight-module curriculum to guide conversations around systemic racism in religious communities. This spring, the curriculum debuted at a local Presbyterian church as part of its Sunday morning and evening adult forums. In response to tweaks made by the church, EUAR currently is writing two additional modules to establish a common language and perform a power analysis of race at the beginning of the curriculum. (One of REI training’s major foci is building a common vocabulary and framework through which to understand systemic racism. Without this common understanding, conversations stall easily.)

Working with a church from another denomination to expand the curriculum is one example of the way EUAR seeks out partnerships with groups doing transformative anti-racism and anti-poverty work. Another such partner is End Poverty Durham, a grassroots group seeking to mobilize community and faith organizations to eliminate Durham’s 27% child poverty rate and 18.5% adult poverty rate within the next 25 years. (This is a city with a 2013-2017 median household income of $56,393, per the U.S. Census Bureau.)

During spring 2018, EUAR had the chance to expand its impact with a new diocesan partnership through the Mission Endowment Grant. The group received $25,000 for anti-poverty and anti-racism training. The grant has allowed EUAR to expand and enhance its anti-poverty/anti-racism collaboration with End Poverty Durham, and to promote the collaboration as a model for helping working poor families attain financial sustainability through partnership with non-profits led by people of color most impacted by poverty and racism such as Communities in Partnership

A major part of the work took place on March 7 at Union Baptist Church in Durham, when more than 400 people from Durham’s nonprofit, advocacy, religious and education communities gathered for the 2019 Faith Summit on Racism and Child Poverty. The day-long event focused on anti-racism and advocacy training, and networking among people from diverse sectors of the Durham community already engaging in anti-racism and anti-poverty work. The goals for participants were threefold: to gain awareness and understanding of racism as the root cause of child poverty; to discover resources and services to reduce racism and child poverty; and to create collaborative steps for congregations and organizations to work together to reduce racism and child poverty in Durham. 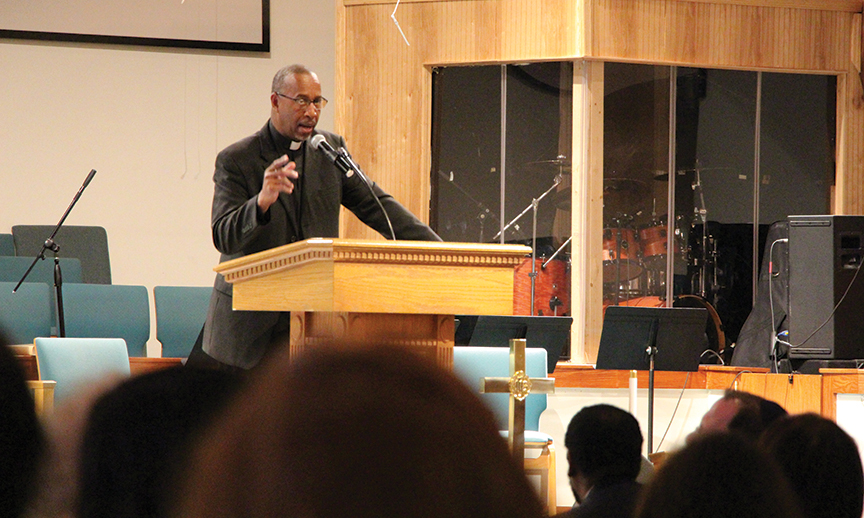 “We are living in a day when children face developmental challenges due to outside forces,” he said, reminding participants that Christianity, Judaism and Islam all teach that we have a duty to care for children. He contrasted this mandate with the fact North Carolina is 15th among states in deep poverty, in which households earn 50% or less of the federal poverty level, and children of color are disproportionately affected. Hawkins introduced a theme that ran throughout the day: Race impacts not only wealth and poverty, but also areas as diverse as educational outcomes, health outcomes and access to transportation.

Freeman, one of the founders of EUAR and summit organizer, emphasized this point as she presented with co-founder and co-organizer Rimer-Surles.

“You live in racism,” she said. “I live into being black. Cathy lives into being white. You have to undo that.”

Participants also heard from Ariel E. Guerrero from O & G Consulting, who did a racial equity analysis of Durham, and a panel of local nonprofit leaders of color who discussed the ways in which nonprofits that aren’t based in the community can bring harmful assumptions and inappropriate solutions to bear on issues that might not even be a priority for members of the community.

During the afternoon, attendees broke into affiliate groups to discuss ways in which their work might intersect in the areas of education and healthcare.

“From infant mortality to life expectancy, race predicts how well you will do,” Guerrero explained, adding that, while outcomes are tied to zip codes, if all else is equal, race is still the number one predictor.

In addition to the summit, EUAR also used part of its grant to fund the EUAR divinity school intern, Madeleine Rebouche, and to update and enhance the organization’s website. The grant also helps fund several anti-racism training scholarships as well as leadership development opportunities. Going forward, EUAR will continue the conversation around advancing racial equity with monthly roundtable discussions and action plans around the root causes of poverty. The eight-part curriculum will also be available soon via the EUAR and diocesan websites.

Join the conversation around anti-racism work and eliminating poverty on the Episcopalians United Against Racism website.