By By Stephen Jurovics, Ph.D.

This article is adapted from the presentation, “Climate Change is a Biblical Issue,” presented via webinar to the Diocese of North Carolina on April 28, 2022.

Creation care is one of the top priorities of both The Episcopal Church and the Diocese of North Carolina. I am grateful for that, because I believe faith communities can strongly influence the national debate about climate change. For climate change is a biblical issue, and there are actions congregations and individuals can take to mitigate it.

By way of background, I’m an engineer. At one time a rocket scientist, I spent the last 16 years of my corporate career working as a contractor with the EPA on several aspects of climate change. I also have enjoyed biblical study for decades, particularly the teachings about the appropriate relationships between human beings and the natural world, what I call the environmental teachings. My engineering background probably affects my reading of the Bible, for when studying a topic, I look for verses which, pulled forward in time, clearly apply to it.

For example, if I look for teachings about recycling, I’m not going to find anything on recycling in the Bible. But I will find teachings about not being wasteful and not discarding what still has use. If we pull those teachings forward in time, we arrive at recycling—“reduce, reuse, recycle.”

When it comes to climate change, we can certainly look at what both scientific data and biblical teachings reveal.

One of the more common arguments against the reality of climate change is that we’ve always had climate cycles, with fluctuations in both temperature and carbon dioxide levels. That’s true, but past cycles are far different than what we are experiencing now. When we look at historical data going back 800,000 years, the highest level found was 300 parts carbon dioxide per million parts of dry air, about 300,000 years ago. Today, we’re at about 415 parts per million. In addition, the cycles in fluctuation historically took place over tens of thousands of  years. We’re now seeing changes comparable in magnitude happening over the course of two centuries, with the most change taking place over the last 100 years. The increase in atmospheric carbon dioxide correlates directly with the increase in carbon dioxide emissions, primarily from the burning of fossil fuels. We are responsible for that. There is nothing naturally occurring on planet Earth that could account for that increase. 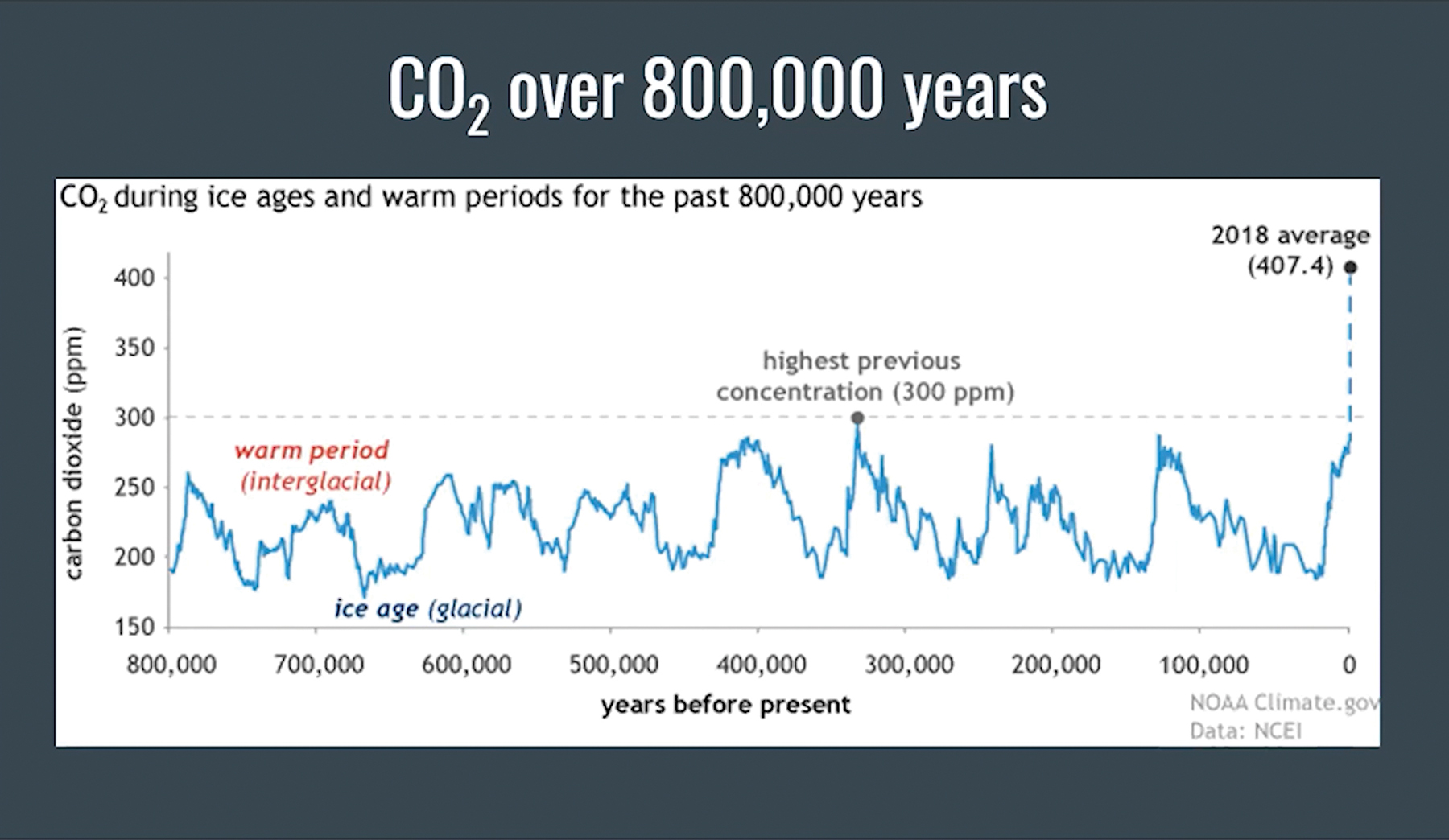 So how is this a biblical issue?

Climate change is a biblical issue because some of its effects, for which we bear responsibility, are contrary to biblical teachings. Directly or indirectly, we are responsible for the damaging effects of climate change upon the God-created world we inhabit.

In Genesis 7:1-5, God tells Noah “Go into the ark, you and all your household…. [t]ake with you seven pairs of all clean animals, the male and its mate; and a pair of the animals that are not clean, the male and its mate; and seven pairs of the birds of the air also, male and female, to keep their kind alive on the face of all the earth.” Noah did all that the Lord had commanded him. Noah had no discretion about what to place in the ark.

In Genesis 1:28, however, God says “Be fruitful and multiply and fill the earth and subdue it and have dominion over the fish of the sea and over the birds of the air and over every living thing that moves upon the earth.” Some people interpret this “dominion” verse as God giving humans the right to rule over all life on earth in any way that we wish. No limits are expressed here. In other words, Noah would have complete discretion about what to place in the ark.

But that is not the narrative. For as the episode of Noah demonstrates, he did not have unlimited discretion. God instructed Noah about the animals and the birds to go into the ark. If Genesis were written saying Noah selected the animals to go into the ark, we could understand that what we have today resulted from Noah’s decisions. But that’s not the message. Noah did not “rule” over the animals and birds. Everything, at God’s command, was to be saved.

I suggest that Genesis 7:1-5 undermines the prevailing interpretation of Genesis 1:28 as a takeaway from the Bible and highlights the importance of looking at all teachings that address a particular topic. I call it the collective view. We can’t take any one verse as a definitive statement of Hebrew Bible teaching until we examine all five books. This instance and elsewhere that we shall encounter God reveals the limits of our latitude, mastery and discretion.

You’ll note that Genesis 1:28 does not give us dominion over the land. The verse identifies fish, birds and animals, not the land. God says to Moses in Exodus 19:5, “Indeed, the whole earth is mine.” Psalm 24 picks up on this: “The earth is the LORD’s and all that is in it, the world, and those who live in it.” This limitation, or clarification, of the earlier Genesis 1:28 verse is not rare in the Hebrew Bible.

Genesis 9:3 is another striking example. “Every moving thing that lives shall be food for you, and just as I gave you the green plants, I give you everything.” Does that verse hold up from Genesis through Deuteronomy? No. In Leviticus 11, about 20 verses instruct us about what life forms can and cannot be eaten. That’s why observant Jews don’t eat pork or shellfish, for example. Thus it’s risky and incorrect, in this case, to view Genesis 9:3 as the definitive takeaway from the Bible about what can and cannot be eaten.

If in Genesis we are taught that God wanted man (Noah) to save every species, then humans, the descendants of Noah, are not to cause the extinction of species. The Noah episode has long been viewed as a biblical mandate for preserving biological diversity.

With climate change, we are causing the loss of species at thousands of times the natural rate. E. O. Wilson and other biologists estimate that, historically, we lost about one species every four years. Now we are losing thousands per year. This can lead to devastating effects, including the collapse of ecosystems. Thus with climate change, we are acting contrary to the biblical teaching about preserving all species, preserving biological diversity.

A HARVEST IN DANGER

Another effect concerns our use of the land. As we saw, Exodus 19 notes that all the Earth is God’s. In Leviticus, we are given permission to use the land, but with the condition that we take care of the needy and the stranger. “When you reap the harvest of your land, you shall not reap to the very edges of your field or gather the gleanings of your harvest; you shall leave them for the poor and the stranger.” (Leviticus 23:22) That is, we find obligations to harvest this way because the land belongs to God, and thus God can stipulate this.

The Earth, all that is in the world and those who live in it are the Lord’s. For me, Jesus alludes to these teachings about our obligation to harvest in a way to take care of the needy and the stranger when he says in Matthew 25:40, “Truly I tell you, just as you did it to one of the least of these who are members of my family you did it to me.” When you take care of the thirsty, the hungry, the naked, the stranger, you connect with Jesus.

In this way, also, climate change is a religious issue. Climate change is bringing about a shortage of food and water, which is exacerbated by an increasing world population. We are steadily reducing our ability and, likely, our willingness to take care of the needy and the stranger, the least of these. Crop losses to pests increase with the heat. Drought and torrential rains diminish productivity. Higher temperatures increase the evaporation of water. The use of chemical fertilizers and insecticides destroy nutrients in the soil. French scientists who have been monitoring soil quality for more than a century estimate that, unless current practices change, we can anticipate only about 60 more good harvests. Sixty harvests from the land that belongs to God and to which God gave us access to sustain ourselves. 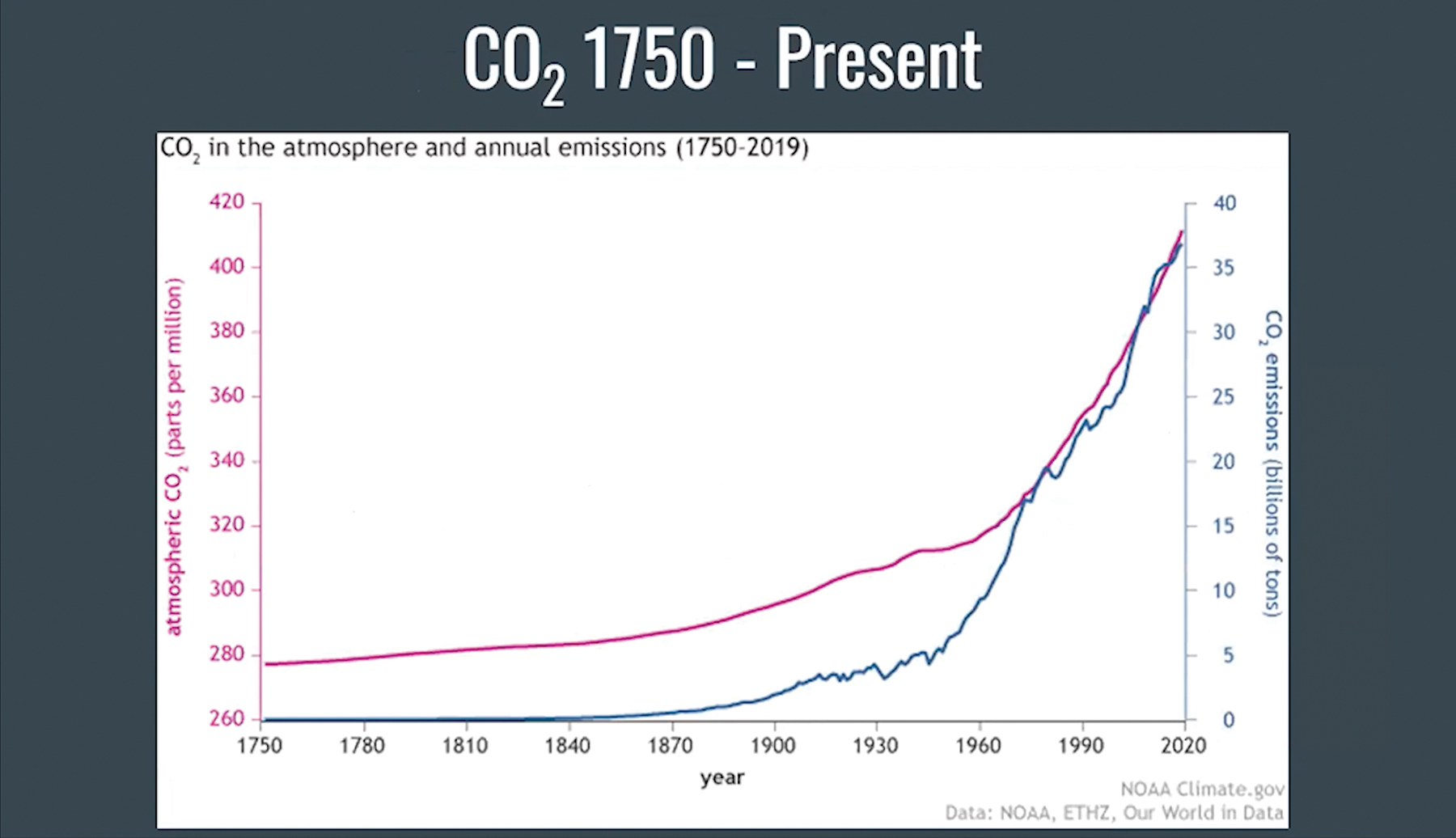 Yet another effect of climate change concerns teachings about air pollution. Air pollution itself is not a new concept, as it existed even in biblical times from tanneries, the carcasses of dead animals, wind-borne chaff and many other sources. The Bible provides examples of not just awareness of it, but steps to mitigate it for the sake of neighbors. I view emissions of carbon dioxide as a form of air pollution.

Air pollution, in various forms, has contributed to health issues of those who live in affected areas. If greenhouse gases are also a form of air pollution, and a form that leads to climate change, continuing in practices that contribute to them is contrary to biblical teachings: We fail to love our neighbors as ourselves.

So what is to be done? What can each of us do? The window to effect change is closing, but it is not yet closed. There is still hope if we take action.

For example, assess the energy efficiency of your congregation. This could be the efficiency of your building or the waste produced during the living of  your church life. (See “Actions to Reduce Climate Change” at hospitableplanet.com.) Go solar. (For help, contact www.ncipl.org.) Change your transportation methods to reduce emissions. Compost in your community gardens. Make a commitment as a congregation to mirror the goals set by the Diocese of North Carolina and the Episcopal Church; they won’t meet their goals and the impact they hope to make as a faith community without you doing your part.

Take advantage of resources such as ZeroWasteChurch.org to help guide you, or explore the myriad resources offered by the Diocese of North Carolina for ideas and ways to get started. Incorporate the changes in your church life into your life at home.

Outside of church, engage in areas where you can effect change. Religious belief should not dictate public policy, but it can serve as the motivation to ensure you are casting your vote or advocating for public policies that support efforts, first to slow and then to reverse the effects of climate change. Demand that our government leaders take meaningful action, and, should they fail to do so, let them know with your vote that support will go to those who will.

The global effect of climate change has become an existential crisis; it is the fight for our own life-support system. The failure to do so will come at a cost far beyond anything economics can measure. Mitigating climate change is far less costly than dealing with it. That cost will become unsustainable in the near future. But there is still hope, and the path to follow is clear. It’s in the teachings of Scripture; the science and data are showing what has happened when we deviate from them, and they’ll no doubt show what happens when we return to them.

Dr. Stephen Jurovics holds BS and MS degrees from Columbia University and a Ph.D. in Engineering from the University of Southern California. He is the author of Hospitable Planet: Faith, Action, and Climate Change. Contact him via the diocesan communications department.