Climate Strike 2019: Our Youth and Our World Need Us 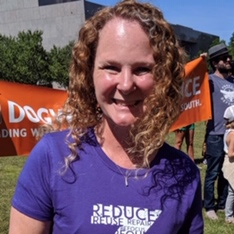 I know that the scripture passage “and a child shall lead them” from Isaiah is overused and often taken out of context, but I couldn’t help it. They were the words that kept coming back to me over and over in the days before, during and immediately after the Youth Climate Strikes that occurred on Friday, September 20, 2019, at different locations around the world. I had followed the story of Greta Thunberg starting her school climate strike in front of the Swedish parliament building, by herself, only to see that a year later her activism would push millions around the world to speak up. To say in one loud(ish) voice: we are in crisis and things must change. And I followed her lead – I showed up for the Raleigh event – hoping that my choices might make a difference, too. Along with Greta Thunberg’s story, I have also followed the stories of youth activists closer to home, like Hallie Turner and others, who have from 10 and 12 and 14 years old pushed (and begged) our North Carolina leadership to do better. I continue to be in awe of the skills, the determination and the gifts that God has given them. I am so, so thankful for these young people.

But here’s the thing – it shouldn’t just be them! And, if I’m totally honest, I know that it’s not just them.  There have been scientists, people of faith, conservationists, faith communities, educators, organizations and legislators all on the front line to save our planet, but as these youth are reminding us, up until this point, it has not been nearly enough. As adults, they need us to use our influence, in whatever form that takes, to speed up change. They simply need us to do more.

What can we do? The problem seems so big, so vast, so intractable.  Attending the Climate Strike in Raleigh, I saw hope and a lot of action. The hope came from two main places.

First, there were representatives of more than 40 secular and religious organizations set up around the edges of Halifax Mall. Made up of people just like you and me, each organization was working on their piece of the puzzle. Composting and soil health – check. Using less waste at home – check. Contacting local governments – check. Trying to affect our systems of agriculture – check. Trying to affect our energy systems – check. Using less waste at work and places of faith – check. Moving to a less carbon-heavy diet – check. Registering to vote – check. Contacting federal representation – check. Offering education events – check. There is movement on all these fronts, but more need to be involved. I urge you to find a piece of the puzzle that speaks to you, then plug in. As people of faith, we are urgently needed!

Second, in listening to the speeches given by the youth on that hot afternoon, I was reminded why almost every major advancement for humanity has been pushed through by young people. These young people believe that change is possible; they do not accept that this is “just the way it is.” They see opportunity, but they need every single one of us to pull together and fulfill those opportunities for big change. I believed them when they said over and over again that we can do this.

Commenting on the Global Climate Strike, Dr. John Sentamu, the Archbishop of York, said, “[t]he Global Climate Strike is led by children and young people across the world who are frightened by the scale and speed of the climate emergency and who are frustrated by the failure of governments, corporations, organizations and citizens to tackle this problem. This is humanity’s greatest and most urgent challenge.”

Each and every one of us can decide today to take an action that will help to repair and sustain this wonderful, precious creation that God gave to us. And as a friend says, “We don't all need to be leaders, we can be supporters." Find your place. God Bless.

Becky Showalter is an engineer, mom and a person of faith.