Celebrate Good Times: How Graduations, Weddings and Other Joyful Gatherings Get Creative during a Time of Physical Distancing 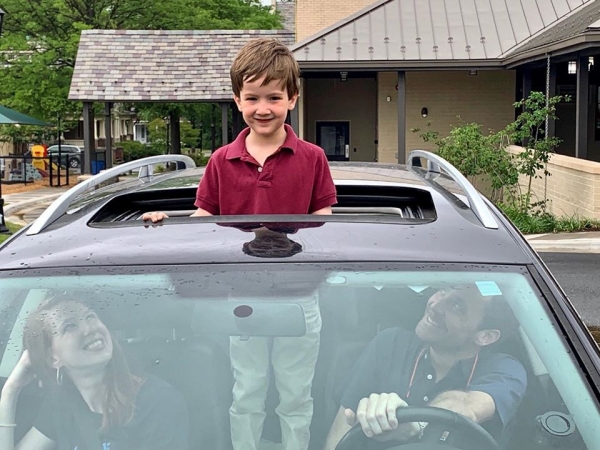 How do we celebrate joyful moments, transitions and accomplishments in the midst of a pandemic? By adapting them to show our love and support while keeping a safe physical distance.

That’s what schools, parents and churches have done for graduates of all ages this year. One of the last occasions the Rev. Nathan Finnin’s family observed before they left our diocese to move to St. Andrew’s-By-the-Sea, Nags Head, was the graduation of five-year-old Beckett from Holy Trinity, Greensboro’s preschool. The families of the approximately 30 graduates remained in their cars throughout the parking lot ceremony as chaplain Sarah Carver led a ceremony livestreamed on Facebook. The graduates joined in singing some of their beloved chapel songs and in praying their school prayer and the Lord’s Prayer.

“It’s really hard to say good-bye to people without a hug,” Finnin acknowledged, but the graduates waved out their car windows as their names were called and enthusiastically took over from their parents in honking car horns to honor their friends. Even in the midst of such a hard time, Finnin said, “We came away thinking ‘That was awesome!’ These days of sheltering in place have made us even more grateful for the few interactions we do get to have.” 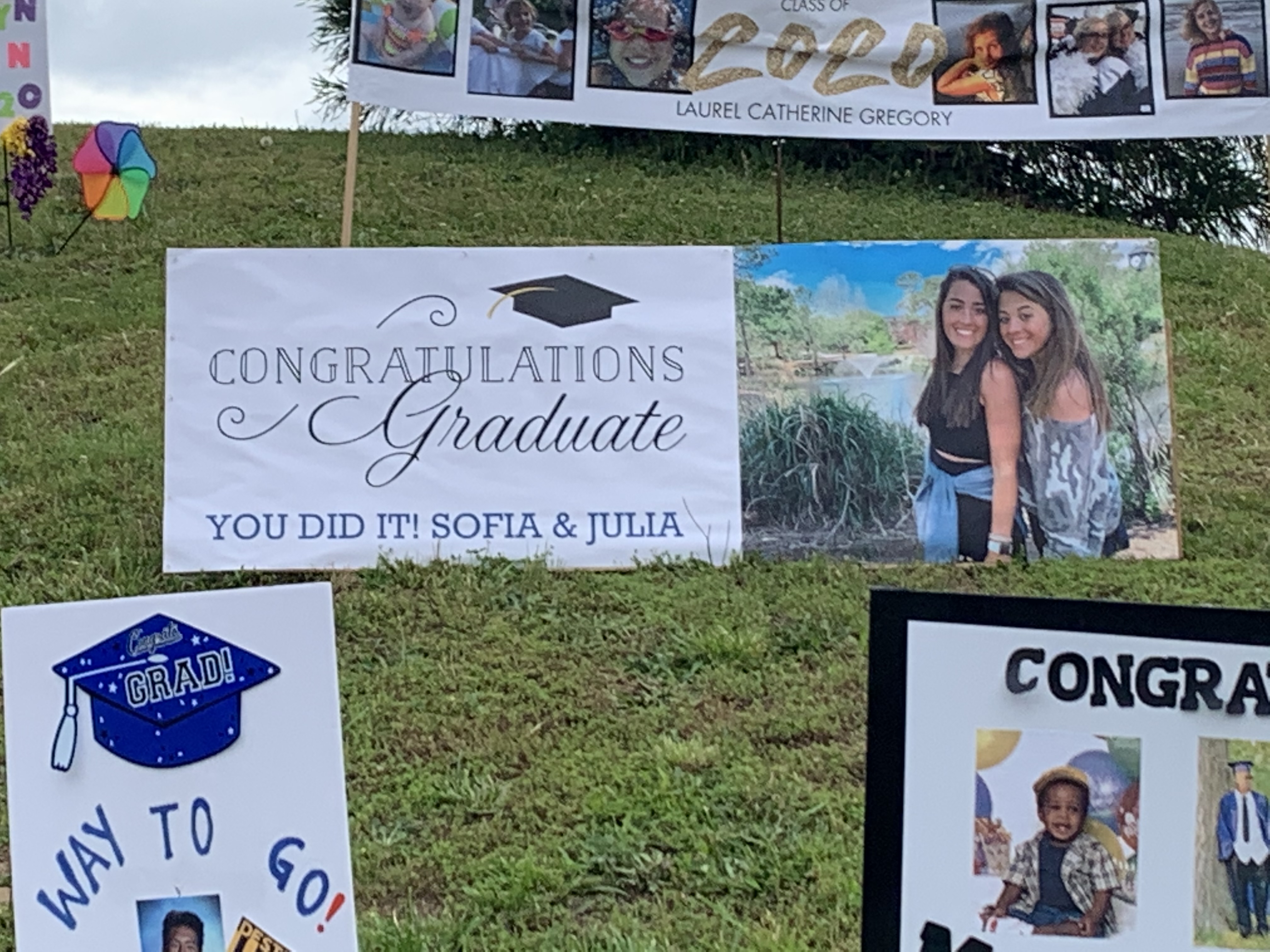 Congregations and communities have found ways to honor the high school graduates in their midst, too. Julia and Sofia Gillespie, twin daughters of diocesan director of finance Maria Gillespie and her husband, Jim, were among the graduates of Heritage High School in Wake Forest who were honored with a drive-through parade. For Julia and Sofia, the end of the school year normally means the countdown to HUGS camp, which they call “the best week of the year,” has begun. Sadly, this year it wasn’t possible to hold HUGS camp in person, but the Gillespies participated in the online version, filling their home with laughter as they reunited with friends from previous summers.

Saint Ambrose, Raleigh, normally celebrates its high school graduates in style, with an hours-long celebration at which elder members of the church speak encouragement to their younger friends and shower them with gifts. “Of course,” noted the Rev. Jemonde Taylor, rector of Saint Ambrose, “we couldn’t do that this year.” But the church still celebrated its three graduates this spring with a parade of cars, home-delivered gifts and a digital coffee hour during which the three were, in the words of their rector, “front and center.”

“It was very uplifting,” Taylor added. “It was very joyous and joyful to have that celebration in the midst of what’s happening, particularly since we can’t gather in person.” Saint Ambrose is in the midst of an ongoing struggle for environmental justice, bringing to light the fact that raw sewage was dumped into Walnut Creek near Saint Ambrose for six decades until this June, and also publicizing the flood risk to Saint Ambrose and the predominantly African American Rochester Heights neighborhood of a new proposed soccer stadium south of downtown.

While living with these and other dangers, the church has been continuing to weave its bonds of affection and practice thanksgiving through digital means, recently participating in a virtual blessing of a new Habitat for Humanity

house in Southeast Raleigh, and discerning how best to celebrate the several new babies born among the congregation in the last few months. “I’ve announced three births in the last five weeks,” said the rector in mid-July. “We’ve just been blessed with the birth of these children.”

The Rev. Gus Chrysson, assistant to the rector at St. Mary’s, High Point, and the Rev. Jonathan Pucik, director of The Friendship Table, a new intentional community in High Point, had been planning to hold a blessing and thanksgiving of their own this fall: their wedding, where they expected to be surrounded by family and friends. But having lived through a couple of months of a stay-at-home order, the two decided to unite their lives earlier. 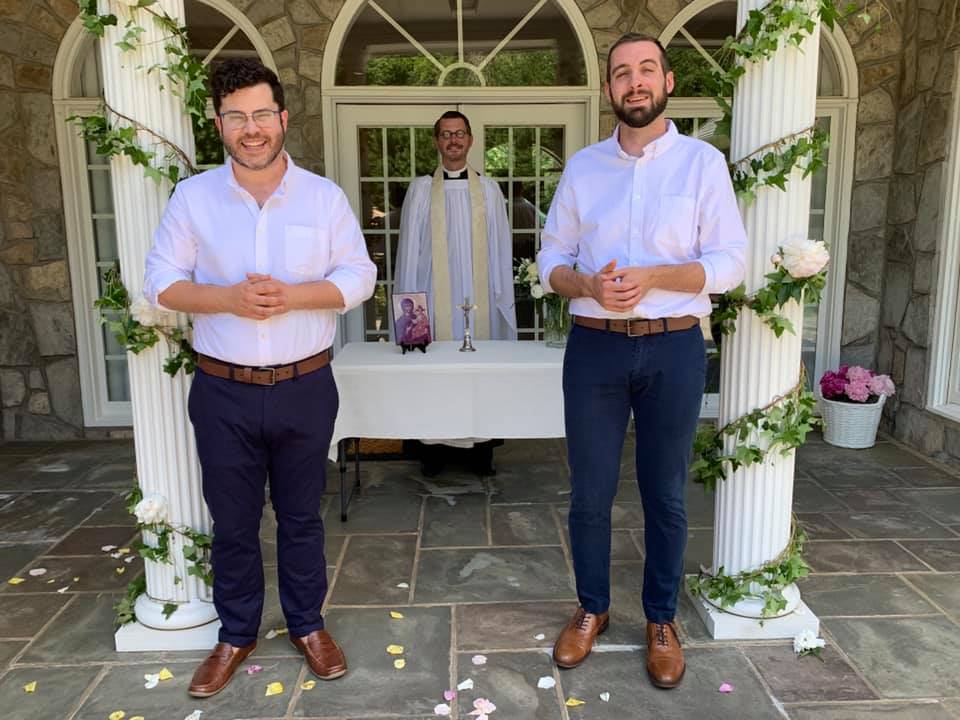 “We don’t really know what September will look like,” Chrysson said they realized, “and the next chapter of our life could be put on hold indefinitely or we could just do it.” In such an uncertain and challenging time, Chrysson added, “We want the closeness that marriage brings, its particular grace.” So the Rev. David Umphlett, rector of St. Mary’s, officiated a service in Chrysson’s parents’ back yard in Winston-Salem in May. The grooms whittled their intended guest list of 100 down to 10 in-person participants, with others joining in over Zoom. After the ceremony, the couple and their guests enjoyed individually wrapped lunches. Not touching their family members “on that day of all days” was unusual, but didn’t dampen the little congregation’s joy. “We ended up thinking [our wedding] was the best thing ever,” Chrysson remarked. “And now,” in the midst of the Movement for Black Lives, “we’re figuring out which protests to go to in the Triad together.”