CAMINANDO WITH JESUS: Of Winners and Losers

As Jesus was setting out on a journey, a man ran up and knelt before him, and asked him, “Good Teacher, what must I do to inherit eternal life?” Jesus said to him, “Why do you call me good? No one is good but God alone. You know the commandments: ‘You shall not murder; You shall not commit adultery; You shall not steal; You shall not bear false witness; You shall not defraud; Honor your father and mother.’” He said to him, “Teacher, I have kept all these since my youth.” Jesus, looking at him, loved him and said, “You lack one thing; go, sell what you own, and give the money to the poor, and you will have treasure in heaven; then come, follow me.” When he heard this, he was shocked and went away grieving, for he had many possessions.

Peter began to say to him, “Look, we have left everything and followed you.” Jesus said, “Truly I tell you, there is no one who has left house or brothers or sisters or mother or father or children or fields, for my sake and for the sake of the good news, who will not receive a hundredfold now in this age—houses, brothers and sisters, mothers and children, and fields, with persecutions—and in the age to come eternal life. But many who are first will be last, and the last will be first.”

Rabbi Harold Kushner, of blessed memory, wrote a very good book several years ago with the title How Good Do We Have to Be? This is the opening question in today’s reading, when the rich man asks Jesus, “What must I do to inherit eternal life?” Now, when it comes to winning, this man has no equal because he can confidently assure Jesus that he has kept all the commandments without fail since his youth. It would almost seem that, as a great winner, this man who kneels before Jesus perhaps is looking for Jesus to congratulate him and even to lift him up as an example to others.

If it all were about winning....

The rich man is certainly admired. In any society, people tend to see the one who has made it, the one who succeeds, the wealthy, as a superior person. The mere fact that a person has wealth is considered in many contexts, both in that time and in ours, as incontrovertible evidence that God blesses them more than others. (This is the allure of the so-called Prosperity Gospel). And to top it all off, he has such tremendous moral qualities! In the eyes of everyone, including the disciples, this man truly rocks. That is why they are amazed when Jesus says, “How hard it will be for those who have wealth to enter the kingdom of God!”

If it all were about winning....

Notice, however, that, with great love in his eyes, Jesus gently says to him, “You lack one thing; go, sell what you own, and give the money to the poor, and you will have treasure in heaven; then come, follow me.”

Jesus sees everything very differently from us. It's not about winning. A winner feels that he or she is the owner of everything. Master of the Universe, we call him or her. But it turns out those who own everything are no longer free. That is the great irony. The Argentine singer-songwriter Facundo Cabral often said, “[T]he conqueror, by having to guard his conquest, becomes the slave of all that he conquered.” Those who own everything are owned (possessed) by their many possessions. Therefore, in the Gospel of Jesus the consistent and persistent message is that you must lose to win. It’s not about winning. Sell it all. Give it to the poor. Follow me. The problem is not that you have wealth, but that your wealth has you, and it so impoverishes your soul that sooner rather than later you do end up belittling and oppressing others with your obsession to own everything, with your sense of superiority, with your great list of material and moral successes.

Eternal life does not begin after death but in this life. Eternal life is the quality of life enjoyed here and right now by every person who is dedicated to the well-being of people and this beautiful creation in which God has placed us— not as owners but rather as gardeners and stewards. The kingdom of God is not in another world but is found in this one; when there are no owners imprisoned by their riches but all are free servants of one another, therefore no one is enslaved, no one is owned, no one is a commodity. The kingdom of God is the realization of Beloved Community, where the dignity of each person is respected, where no one is pushed around, where love reigns and therefore we live in peace and justice.

How good do we have to be? The two rabbis I mentioned, Kushner and Jesus, are not interested in that. Eternal life is not won; we have already inherited it! We don't have to be anything else because everything that we wish we were we already are! Since before the foundation of the world, you and I are sons and daughters who God contemplates and gazes upon with infinite love, kept as the apple of those divine eyes that continually invite us to be free and to follow Jesus on the way of love where we will have life and have it abundantly.

The Rev. Daniel Robayo is the missioner for Latino/Hispanic ministries in the Diocese of North Carolina. 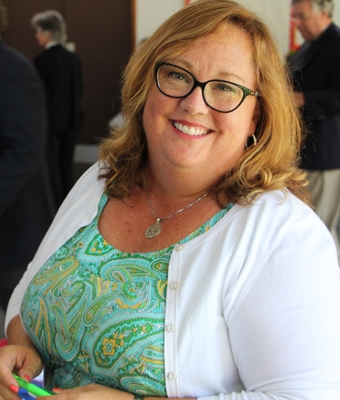 Canon Massey graduated from Virginia Commonwealth University with a degree in Mass Communications and has over 15 years of experience in sales, marketing and association management. Prior to working at Diocesan House, she served as parish life coordinator for St. John's, Wake Forest.

Canon Massey works with the Office of Transitional Ministry and supports congregations and clergy in transition. She administers the Safe Church program and support the work of the Commission on Ministry, the Pastoral Response Team and the Disciplinary Board.

Canon Massey enjoys learning how people and organizations work together and says it is an honor and a privilege to serve the clergy and churches in our diocese.

Canon Massey is a native of Richmond, Virginia, and has lived in North Carolina with her family for 10 years. She, her husband Robert and their three daughters live in Wake Forest and are members of Christ Church, Raleigh.

The Diocese Gives Thanks for the Ministry of the Rev. Canon E.T. Malone, Jr.

The Diocese gives thanks for the ministry of the Rev. Ca...

The Diocese Gives Thanks for the Ministry of the Rev. Pat Grace

The Diocese gives thanks for the ministry of the Rev. Pa...

The Diocese Gives Thanks for the Ministry of the Rev. Lisa G. Fischbeck

The Diocese gives thanks for the ministry of the Rev. Li...

The Diocese Gives Thanks for the Ministry of the Rev. John G. Talk, IV

The Diocese gives thanks for the ministry of the Rev. Jo...

The Diocese welcomes the Rev. Katherine H. Byrd as the n...